Children's book about a talking alien baby (who lives on the moon?)

I have been looking for this book for a long while. I remember being charmed by it when I was 8 - so 2000. In England, UK if it helps. The cover was a turquoise green colour. Some plot points I can recall:

Despite remembering weird little details, I can't find any info on this book! Please help if you can, I'd love to read it again, it had such a delightful tone and I'm sure there were more in the series.

You're thinking of Spacebaby by Henrietta Bradford! I read it in school when I was around 8. 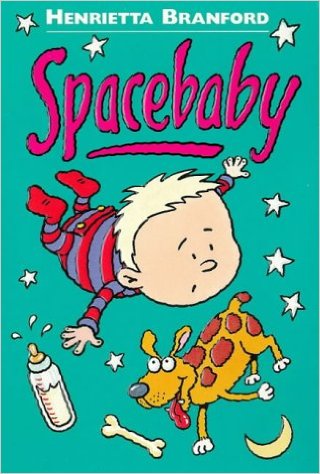 13
A fantasy book about runes where the hero learns to chop wood
13
Book About A Boy Who Lives in a Children's Home with a Dark Secret
12
Children's book about a boy making a deal with a demonic piece of software
5
Children's novel about a magic spring, called something like "Down the Mountain"
23
Story about astronauts who set off an alien warning beacon on the moon (or Mars?)
8
Children's fiction book about the multiverse
8
Book identification: children's book about family of vampires
10
Book: Two alien species living on the same planet, depending on each other but not aware of each other