Why didn't the Hobbits get frostbite?

This is a question that's been bothering me for the last couple of days:

How is it that the hobbits of the Fellowship were able to survive such cold temperatures throughout their travels without having any foot protection?

I know it's said that they have thick "leather like" soles, with ample amounts of hair for warmth but still, I don't understand how that could provide much more warmth than for instance a regular leather shoe. On top of this I know that multiple days (or even weeks) of their journey was spent crossing mountain ranges, which, near a summit would have a temperature far below freezing. This combined with the assumption that they only have the warmth of shoes on there feet would have presumably resulted in some level of frostbite. But to my knowledge there is no such mention of these problems in the novels or movies aside from the odd "It's cold".

Anyways, I'm just wondering if anyone has some form of explanation to this phenomenon or do hobbits just have really durable feet?

The prologue, Concerning Hobbits, has this to say about Hobbit feet:

They dressed in bright colours, being notably fond of yellow and green; but they seldom wore shoes, since their feet had tough leathery soles and were clad in a thick curling hair, much like the hair of their heads, which was commonly brown.

The text "they seldom wore shoes" does indeed imply that Hobbits could and did wear shoes when the need arose, and this is further confirmed by Tolkien's Letter 27, this time concerning Bilbo in The Hobbit:

There is in the text no mention of his acquiring of boots. There should be! It has dropped out somehow or other in the various revisions – the bootings occurred at Rivendell; and he was again bootless after leaving Rivendell on the way home.

So in The Hobbit, and despite it's absence in the texts, Bilbo therefore wore boots during his entire time from the Misty Mountains, through Mirkwood, to Lake-town and the Lonely Mountain, and back to Rivendell.

It's not beyond the bounds of possibility that the Hobbits in Lord of the Rings likewise wore boots, also despite it not being mentioned in the texts.

Other than vague descriptions of woolly feet with thick leathery soles in The Hobbit and the prologue to The Lord of the Rings, Tolkien didn't go into any detail on hobbit anatomy.

However, there are plenty of animals with hairy, padded feet who do perfectly well in snowy and mountainous conditions. The arctic hare is a good example: 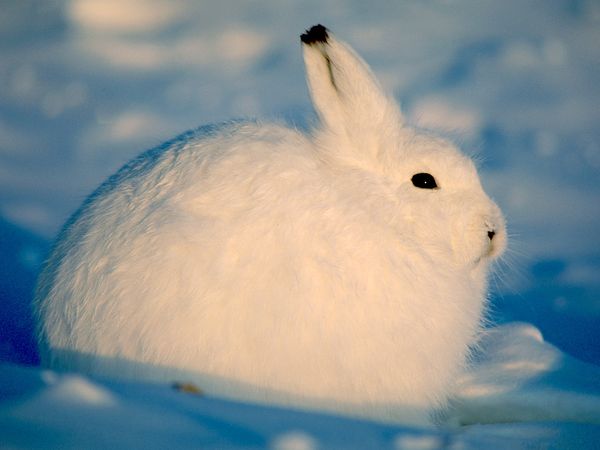 Even normal human beings can walk or run barefoot on snow for a surprisingly long time with no ill effects. Hobbit feet will be better suited than ours to cold conditions.

In short, the answer seems to be "really durable feet".

A combination of factors, one of which has already been mentioned.

I think they did start to get frostbite. Frodo mentions that his toes had begun to feel warm when he falls asleep in the snowdrift. This confusion between heat and cold is a symptom of frostbite.

2
Did hobbits go without shoes even in Caradhras?
4
Are there any instances of Hobbits hurting their feet?

4
Why didn't the Nazgul or their beasts pick up the Hobbits' scent?
3
The effect of the Hobbits holding the One Ring?
21
Does the 'Doom/Gift of Man' apply to Hobbits?
28
Why were Hobbits not included in the old lists?
40
Are hobbits religious?
7
What happened to the Stoor Hobbits?
1
Where do Hobbits live?
15
What type of writing did the Hobbits use?