Why didn't the army Mance Rayder assembled sail south around The Wall?

According to this answer, Stannis' army sailed north around The Wall.

I've attached the image from the answer below.

Why didn't The Wildlings just sail south around The Wall the same way Stannis sailed north around it?

They lived in / amongst massive forests so they had no shortage of material to construct sips with.

Is it ever explained in canon? 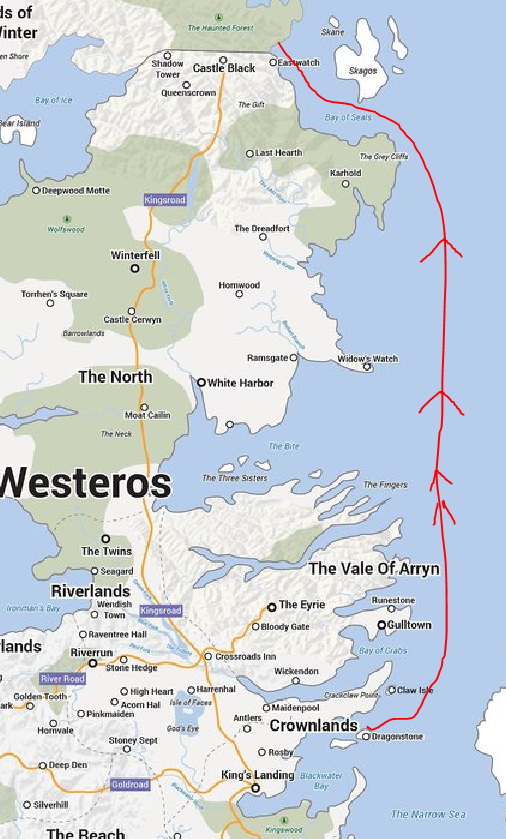 They had no spies in enemy camps to be able to track troop movements, or any idea of the numbers of men other armies may have.

This means they have no idea what they would be sailing into. The northmen could have had fleets of ships to stop them before they got anywhere near land for all they knew. Remember, Jon managed to convince them that 1000 men manned Castle Black, when in reality it was less than 200.

So they would not have risked a small strike force (like the one that Ygritte and Jon were a part of) traveling that way, never mind a full army (hence why they went over the top of the wall).

This is besides the rest of the issues:

The only defensive strategy of the wildlings was their sheer numbers. They knew the Night's Watch were not an army, they were glorified guardsmen. Whilst they were more regimented than wildlings, they didn't have any chance of beating the wildlings in open combat.

The wildling's only hope was to oust the Night's Watch from Castle Black and take it for themselves. And it would have worked too, if it wasn't for that meddling Stannis.

Because they do not have a navy.

Assuming they had a single boat they would be able to ship a small group south of the wall who could get picked off. They would have to be people you trust so they don't just run off.

Maintaining a navy is a very different proposition to maintaining an army. You need shipyards to build them, trained sailors and regular maintenance on the boats. You would also need powerful ships to avoid the pirates (not least of which Greyjoy fleets) otherwise you could lose half your forces.

With an army you just need men who can swing an axe. The wildlings are barely hanging on north of the wall and do not have the skills or resources to maintain a large navy.

In addition to the fact that they had no navy or any skilled ship builders as the other answers have pointed out.

Wildlings did use ships to bypass the Wall. We never find out in the books how Osha and her raiding party that met Rob and Theon that day, but in the TV Series she says she used a boat to get around the Wall.

The question "Why didn't the army mance raider sail south..." suggests this might be the easy / obvious solution. But actually assaulting the gates at the wall is the easier solution. If it weren't for a series lucky circumstances for the Nights Watch the army would have walked through the gates without any big delays.

If their raiding party made it over the wall and taken the watch by surprised they could have entered without even a fight. Even after the watch beat back the first assault there was little hope of holding out until Stanis Arrived (Which no one could have predicted)

There's also the Horn of Joramun, whether or not they actually had it / it worked / whoever commanded the Nights Watch believed it worked. It'd be another reason to try the gate rather than start working on ships.

I believe they considered the ocean while building the army and choose the simpler and safer path, then had a long streak of bad luck (Mainly thanks to Jon Snow)

One thing that has not been mentioned yet is that metal is hard to come by north of the Wall. Craster demands an ax as payment for letting the rangers stay in his keep. Lord of Bones wears an "armor" made of bones. In addition to the lack of knowledge of ship building and navigation, the lack of metal tools is another reason why the wildlings could not build a large fleet and sail south of the Wall.

In order for the wildlings to build the ships they have to:

Well in order to build a "viking longship" you have to use specialised tools. and to have the tools you have to have an existing infrastructure that can support it all. I havent been able to find a place where i can say exactly how long it takes to make 1 ship but there are a few replica shipbuilders in Northern europe that have done so in a span of a year ( dont know if it was full time or weekend Work or whatever).

If by some magic they have all of the above mentioned stuff North of the wall actually Building ships to take 100.000 people, animals, food etc. South of the wall would take considerable time. Even Building for half that many people and then shuttling them would take an ungodly abount of resources and time. Time is one thing that the wildlings DO NOT have.

so lets say they have a master shipbuilder and a crew of skilled Carpenters.

you do the math needed for every single wilding.

The ONLY reason wildlings have United is the White Walkers. And sitting Down to make hundreds of ships is NOT an option!

Wildlings do sometimes sail around the Wall and it is mentioned a few times in the text itself.

Hother wanted ships. "There's wildlings stealing down from the north, more than I've ever seen before. They cross the Bay of Seals in little boats and wash up on our shores. The crows in Eastwatch are too few to stop them, and they go to ground quick as weasels. It's longships we need, aye, and strong men to sail them. The Greatjon took too many. Half our harvest is gone to seed for want of arms to swing the scythes."
A Clash of Kings, Bran II

The Others take them all, thought Jon, as he watched them scramble up the steep slope of the ridge and vanish beneath the trees. It would not be the first time wildlings had scaled the Wall, not even the hundred and first. The patrols stumbled on climbers two or three times a year, and rangers sometimes came on the broken corpses of those who had fallen. Along the east coast the raiders most often built boats to slip across the Bay of Seals. In the west they would descend into the black depths of the Gorge to make their way around the Shadow Tower.
A Storm of Swords, Jon IV

This tactic only seems successful though because the Watch has no ships themselves to stop the boats from getting across and because only a handful go at a time so they can disappear. Also note that they are referred to as little boats so probably on the scale of canoes and rafts, not enough to haul an army.

So let's assume they had planned to sail around the Wall, how would they do it? Boat building is a skill and one that the wildlings likely don't possess as they have no need for it. So then let's assume they have lots of small boats/rafts to sail across. An armada of that size would be spotted a mile off and the Watch would just need to man the shores and fight as they come ashore, an easy enough task as they would only arrive in small numbers at a time and be at the disadvantage of being in a boat sat down not stood on dry land.

Basically it wouldn't have worked because they would have just made themselves sitting ducks. Also how big of a boat do you need to ship 100's of giants and their mammoths?

20
How did Stannis's army get north of the wall?
16
Why can't the Others go around the Wall at sea?