Why doesn't S.H.I.E.L.D. put Hulk on the index and lock him away?

In Marvel Cinematic Universe, we see that S.H.I.E.L.D. puts dangerous and unstable supernaturals on the index and locks them away (Marvel's Agents of S.H.I.E.L.D.).

Talking about Hulk, he is both dangerous and unstable. (Here, his being good is irrelevant if he loses self control even once). At least, S.H.I.E.L.D. believes that (they had the Hulk cage on the Helicarrier).

Because, quite frankly, it's a terrible idea. It would work against their intentions.

Bruce Banner changes into The Hulk when he becomes angry. He can also change into The Hulk effectively at will (because he is always angry).

Attempting to forcibly acquire or lock up Bruce Banner will only piss him off resulting in two things:

If they are to lock him up against his will, they would either have to put him in one of the existing prisons (as seen on Agents of SHIELD) with multiple other prisoners, or put him in a secluded location. The former will definitely incur stress. If The Hulk were to break out, it would also risk the escape/death of every other prisoner. The latter option is better, but any forcible imprisonment is going to aggravate Banner over time.

SHIELD respects Bruce Banner and everything he brings to the table, but they fear The Hulk. They know that if they are to ever utilize Banner and his abilities (Hulk and non-Hulk), they need him on their side.

Additionally, Banner has shown that he can largely function just fine outside of a cell. He is able to resist changing when Natasha and SHIELD approach him in The Avengers, operates well until he is tricked by Loki, and we later see him sleeping while Tony talks at him.

Most likely, SHIELD is monitoring him after the events of The Avengers, and Banner has likely agreed to it. SHIELD has provided Banner the cabin in the woods. It is secluded, monitored, heavily reinforced, and referred to as "The House That Banner Built", implying that Banner had a hand in designing it. There is evidence in the house (in the form of a Hulk-sized fist print) that Banner had already spent time there. 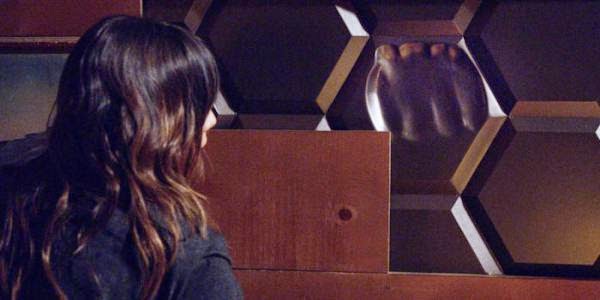 It makes much more sense to work with Bruce Banner to keep The Hulk in check than to attempt to lock him up.

As we see in the 2012 Avengers film, SHIELD wants Bruce Banner's scientific expertise, and it also wants Hulk to be available to smash any threats to humanity.

On both counts, they need Banner's willing cooperation. They are not likely to get it if they permanently lock him in some sort of high-tech dungeon -- leaving aside the question of whether they can imprison Hulk, which as commenters have noted is yet to be settled.

From the Avengers Movie:

Bruce Banner: Are you here to kill me, Miss Romanoff? Because that's not gonna work out for everyone.

Natasha Romanoff: No. No. Of course not. I'm here on behalf of SHIELD.

Bruce Banner: SHIELD. How did they find me?

Natasha Romanoff: We never lost you, doctor. We've kept our distance, even helped keep some other interested parties off your scent.

We've seen instances on Agents of S.H.I.E.L.D. that not all beings on the index are necessarily locked away at the moment of their discovery, but they are all monitored in case they lose control or become immediately dangerous and possibly eventually detained or experimented on.

Obviously, S.H.I.E.L.D. has been keeping an eye on him just in case. I agree with Royal Canadian Bandit's answer that their motivations for keeping him around would have been the eventual potential for his help and cooperation as they did end up needing in the Avengers movie.

Additionally, in the Agents of S.H.I.E.L.D. TV Show we learn about a place called 'The Retreat' in the episode 'One Door Closes'(S2 E15) because

Skye/Daisy is sent there once her seismic powers are "awoken".

While she's there, while investigating internet issues, she peels back some board on the wall to reveal

Coulson is being hunted by the other S.H.I.E.L.D. agents and they're attacking the cabin, he mentions to Hunter that the cabin was built to withstand the Hulk

So this implies (with our current knowledge of the M.C.U.)

What this actually means, I'm not sure. We would need more details but from what we know somehow we can probably speculate

that Bruce Banner was, as you put it, "locked away" in the Retreat, built by S.H.I.E.L.D., at some point in his angry life. Whether they put him there or he put himself there and when in the M.C.U. timeline it happened we do not know

In addition to questions of whether or not the MCU SHIELD is physically able to successfully contain the Hulk, there's the issue that their when Ultimates counterpart tried the same thing and it's implied that the only reason that they could do it for any extended period of time was because they had Ultimate!Banner's approval(ish).

MCU SHIELD doesn't have that. So even if they could sedate Banner (Unlikely, given how attempts to do the same ended up in the Incredible Hulk) and transport him to the Index and restrain him (As the other answers have indicated, it's unlikely SHIELD Tech is physically able to restrain the hulk), without Banner wanting to be there it's just going to piss him off and encourage him to Hulk out.

At the end of the day, unless Banner has a serious change of heart about how efficacy of his "Remain calm, stay away from population centers," strategy and suddenly takes to trusting SHIELD with his well being, it is a more effective and actually plausible course to let Banner handle things.

In Agents of SHIELD, it was mentioned that 'The Retreat' was built by Bruce Banner to contain Hulk not by SHIELD. And it seems not to work, as can be infer from Agent Coulson saying "Let's hope they don't bring him along". when hunter asked how long it will take to break the door.

89
In the Avengers movie, why is Hulk's behaviour inconsistent?
-15
Whose fist dent is there on the seclusion retreat cabin of S.H.I.E.L.D.?

3
Why does the Red Hulk stay as the Red Hulk?
9
Why Hulk didn't get teleported away in World War Hulk?
6
In the Hulk movies, why don't they make him talk?
33
Why aren't we getting Hulk sequels in the MCU?
6
Why didn't S.H.I.E.L.D. intervene during the events of The Incredible Hulk?
22
Why is the Hulk so angry?