Who attacked Dazzler during All-New X-Men #17?

I suspect this is long after the time when spoilers are in effect, but in All-New X-Men #17,

Alison Blaire, aka Dazzler, gets elected as the first mutant president and is apparently assassinated via some sort of orbital laser before demons invade.

My question is, was it ever established who exactly attacked her? Those standing by her implied that this was an example of how humanity would never allow mutants to live in peace, and launches the next Brotherhood, but summoning demons seems outside of the usual government hit squad tactics. Of course, time travel means that it's entirely possible that future will never come to be, but was there ever any explanation, including commentary from the writers, as to who was supposed to be attacking?

It hasn't been revealed. Given that the event is now ended, we may never know for certain.

For the record, what kills President-Elect Dazzler seem to be a blast of fire from a large dragon-like creature, essentially identical to those seen in the first comic in the series; Battle of the Atom #1. Those demons were summoned by a mutant called Animax who bears a substantial grudge against the X-Men (and authority figures in general) after having been recently released from jail.

Although it's by no means certain that she's the one who killed Dazzler, the presence of these demons (and the description of her powers as being somewhat unique) would strongly suggest her involvement. 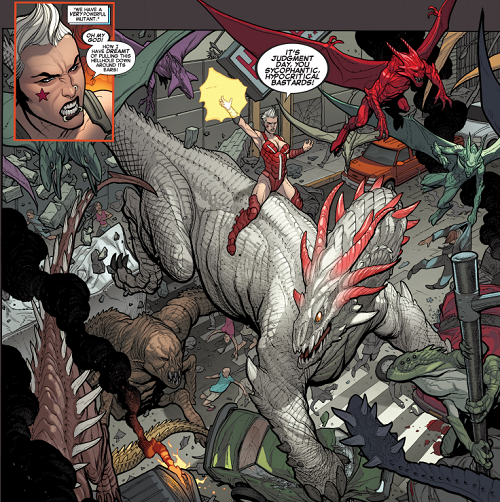 Not the answer you're looking for? Browse other questions tagged marvel x-men all-new-x-men or ask your own question.

5
Who are the X-men?
0
Who are the X-Men in X-Men Regenesis?
16
Who stopped the bullet in the first X-Men movie?
1
In X-men, how is Professor X able to find new mutants?
14
Where do the X-Men get all their money/funding?
1
Who is the artist for the Kitty and Peter pages?
10
Are all X-Men films in the same canon (practically)
2
Where did the children spend their time during X-Men 2?
9
Is there an X-Men character who represents Immovable Object?
9
X-Men who died because of their powers