When does Daredevil happen?

We already have a question about how much time passes over the course of the first season of Daredevil, and I'm not asking for that. Rather, I am trying to figure out when in the Marvel Cinematic Universe's (MCU) chronology do the present-day portions of season 1 of Daredevil take place? The number of links to other events in the MCU is relatively minimal and vague, so I'm not sure just from watching the show itself.

It's clear that it's set during Phase 2 at the earliest, as the Battle of New York has happened. However, it seems unlikely that it's occurring in universe at the same time as it was released, which is how most of Phase 2 has worked. That's because the Battle of New York was way back in 2012, and construction to repair the damage is on going. I'd expect that repair work to be complete by 2015, which leads me to think the show occurs earlier. I also don't recall any mention of the fall of S.H.I.E.L.D., but since the characters don't operate in the government or defense spheres, that's not really conclusive.

When does season 1 of Daredevil occur?

The Setting of Daredevil

In the absence of any reason to think otherwise, we have to assume it happened around the time of its release. Obviously, Netflix shows are released all at once while the show takes more than one day to play out, but "spring 2015" is probably about right.

That being said, as I recently pointed out in another SciFi stack answer, the MCU timeline may not be as tied to real-world time as we previously thought. (To summarize, it seems that Avengers: Age of Ultron is set during the summer/fall of 2014, rather than the spring of 2015 when it will be released.)

Still, the default assumption for any MCU release has to be that it is set around the time it was produced or released, unless obvious (like Agent Carter) or stated otherwise.

As you say in your question, the source of confusion seems to be about the time it would take to repair New York. Frankly, I think you are dramatically underestimating it.

New York wasn't flattened like World War 2 Berlin during the MCU's Battle of New York, but it was pretty roughed up. A lot of the damage was cosmetic, (alien pot-shots in the roads and the sides of buildings, Hulk claw-marks on the walls), but there were several instances of MAJOR damage. Several buildings had chunks taken out of them by the Leviathans, and even more were crushed when the portal was closed and the aliens simply fell from the sky. 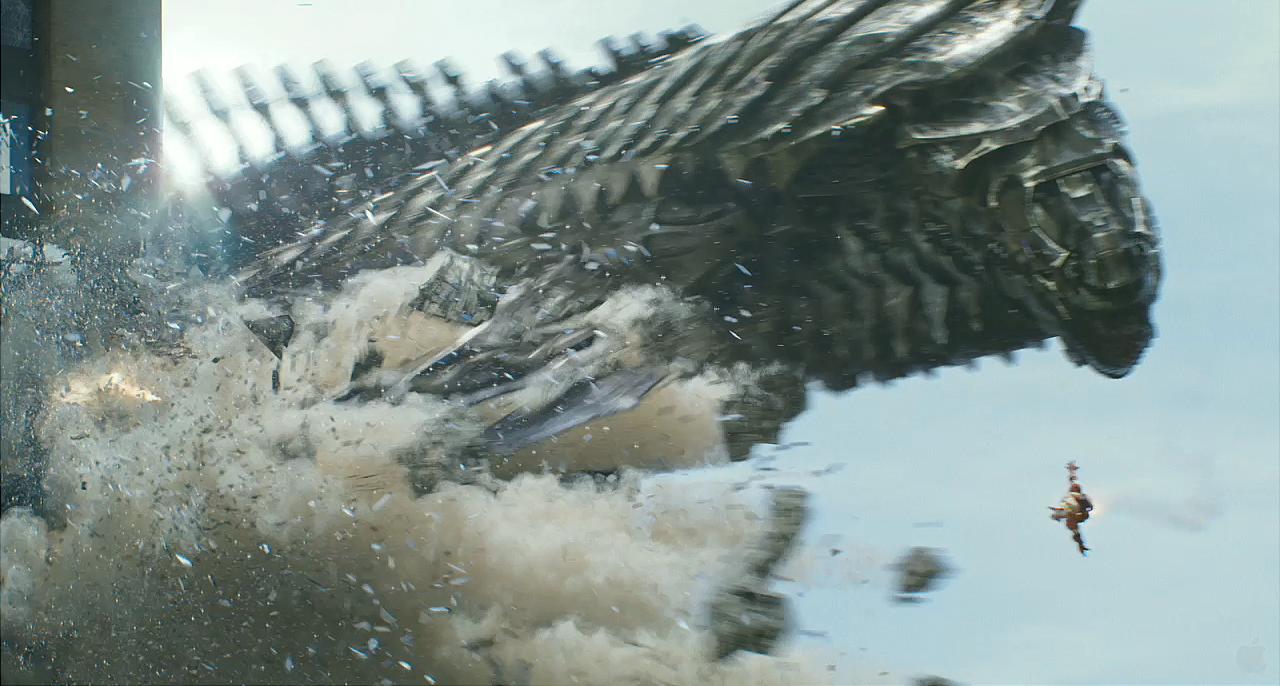 This, on top of the wide-scale explosions and damage done by the Chitauri sleds, and by the Avengers themselves. 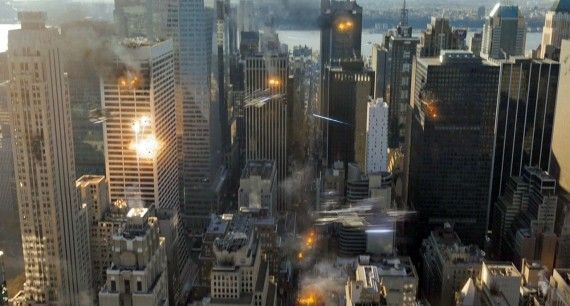 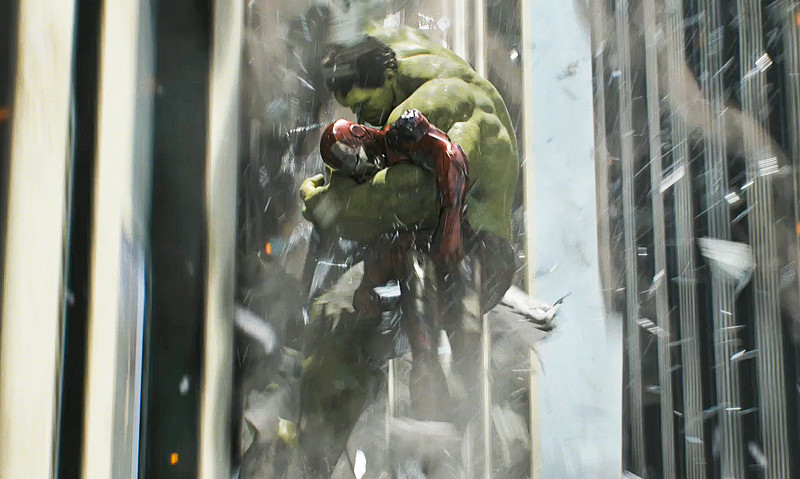 And remember that many repairs are more difficult, time-consuming, and expensive than replacing a window: the Empire State Building likely had to have its entire electrical grid replaced after Thor used it as a cosmic lightning rod, and refacing stone buildings takes time, especially when you're not the only building that needs repairs. The lobby that exploded from Iron Man's "tight corner" maneuver likely had to be entirely gutted and replaced.

Now, I'm not saying that New York was in the same place that London was after the Blitz, but it took London between 40 and 60 years to completely rebuild, and that was during the greatest economic and industrial boom period of human history. Hell, it took them twelve years just to build the Freedom Tower after 9/11.

Given that a professional disaster assessment firm estimated the damage of the Battle of New York at around $160 Billion, I think a 3-year turnaround isn't terribly realistic. Even if the stonework, steelwork, and reconstruction could be done that fast (which is unlikely), there's no way that the companies involved could raise that kind of money in just three years.

To be honest, it should probably be in worse shape than they portray it, rather than completely fixed.

So, at the end of the day, we have to assume Daredevil is happening around spring of 2015 (unless some as-yet-unnoticed Easter Egg ends up demonstrating otherwise), which matches up fairly well with the timeline of repairs for a major city-wide disaster.

The pilot episode of Daredevil occurs roughly two years after The Battle of New York.

When Matt is questioning Karen Page in his apartment, we see the following exchange:

KAREN: I, uh, worked in the financial department at Union Allied. They're overseeing the bulk of the government contracts for the West Side reconstruction.

MATT: I've seen their signs all over Hell's Kitchen.

MATT: Yeah, the world watched half of New York get destroyed. That's a lot of sympathy.

KAREN: And Union Allied benefited from every dollar of it.

This would place the events of Daredevil: Season 1 in early 2015 - roughly at the same time as Avengers: Age of Ultron and Season 2 of Agents of SHIELD.

In episode 8, at about 17:35 in, September 5, 2015 is printed on a newspaper. The show runner also said that the show takes places before Age of Ultron. So does it just start before, or does the whole first season take place before? And where was it confirmed when Age of Ultron takes place, because then, obviously, Agents of SHIELD season two would end around that time, seeing that they're doing a tie-in episode. I wish Marvel would officially map this stuff out! 😂

I haven't found anything 100% official stating a timeline, but Geekritique came up with an MCU timeline that generally makes sense.

He places Daredevil as taking place sometime generally beginning over the summer of 2014 - between the first two seasons of Agents of SHIELD.

For those who don’t understand why I placed Daredevil before AoS s2, here is my reasoning: we know that Daredevil takes place after the events of Avengers, because the Battle of NY helped create the landscape in which this aspect of the universe exists: Hell’s Kitchen. That said, there are two instances that help identify when this takes place, after the fact. The first is the most obvious, an off the cuff remark about the destruction that occurred two years ago (in episode 1). The second is when Foggy Nelson references the Colorado Amendment 64, which passed November 6, 2012 – about six months after the Avengers. So we know it’s in the ballpark of at least two years. But then again, so is Agents of S.H.I.E.L.D. s2. It can be inferred that the events in the 13 episodes of Daredevil take place over the course of several months (I estimate between 3-9), so to guesstimate which episodes arrive before or after S.H.I.E.L.D. episodes would be torturous and pointless. Also, for the sake of not wishing to break up the shows (as they really have nothing in common), I’ve separated them accordingly. And since Agents of S.H.I.E.L.D. overlaps with Age of Ultron, where Daredevil definitely doesn’t, it only makes sense to place it before.

First off, all of you sorely forget about Damage Control. It was SHIELDS quick clean up crew, in the comics buildings would be done in months. We know they exist in the movies because they have been mentioned and there is a TV show in the making to confirm it. Also the battle is stated to have been 2 years ago, which places the show "around" the time it came out. Now it's not entirely accurate because the fall of SHIELD had not been reported yet. Now some may say that there is no government involved so why would it show up. But that's whereally your wrong. First off Ulrich is a reporter, and if a major government agency fell, it would be the first thing to show up in the paper. Also we know the construction of Hell's kitchen is controlled by Kingpin and his lackeys. If SHIELD had fallen, that would be a Centerpoint for conversation between these major criminals.

One major thing is missing from proving when in the time it is, the Avengers tower. This is New York people! The creation of the Avengers tower would be all over the news and would be easily seen in the many New York back drops we see. The only time the tower is seen for Daredevil is in promotional work for the show, and it shows him in his full outfit with the tower behind him. The promotional work simply states the series ends around the time the tower was built.

Therefore, based on the mixed clues, I would place the beginning of the series around 8 months before Cap America Winter Soldier and continuing up to it.

8
What Marvel movies foreshadow Avengers: Age of Ultron?
4
Has New York been repaired to its state before The Avengers?
6
How much time passes during Daredevil?

2
When does Daredevil: End of Days take place?
20
Has Daredevil ever accidentally killed anyone?
19
What fighting style does Daredevil (Netflix) use?
11
Are there any drawbacks to Daredevil being blind?
9
Can Daredevil distinguish colors?
7
When did the Marvel Cinematic Universe U.S. presidential history diverge from the real world's?
10
Does Daredevil really only (mostly) take place in Hell's Kitchen?
6
When did the Hand realize that Daredevil was blind?
5
Does Wilson Fisk discover that Matt Murdock is Daredevil?