Were the zoo apes intelligent in “Rise of the Planet of the Apes”?

Near the end of the movie, when the zoo apes were freed, they seemed to have joined the revolt to escape to freedom. Were they somehow intelligent by any means? They all left in unison and their behavior didn't seem like that of normal zoo ape that's been kept in captivity. Were they infected by the drug at all?

Also, were these apes the ones that trailed behind on the Golden Gate Bridge?

Below Caesar rolls the canisters to infect the apes in their cages and make them 'intelligent'. 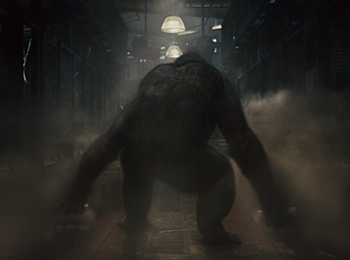 Later the 'intelligent' apes free the apes in the zoo, which then follow them into the city and across the Golden Gate bridge. 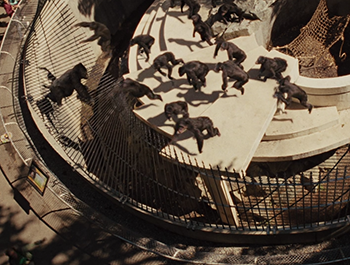 Prior to freeing the apes in the primate shelter from the cages, Caesar gave them the more powerful version of the drug that made him smarter. Note this drug is in fact a virus. This version of the drug was more virulent and was highly contagious. Later on, when Caesar freed the zoo animals, he and the other apes presumably were still contagious, spreading the drug as they interacted with humans and apes alike.

Also yes, they were mostly the same apes that were fighting on the Golden Gate Bridge. The rest were the apes from the Primate Shelter.

Having just watched it, I think the zoo apes were not intelligent, but were in fact following normal ape pack behavior. During the end scenes there seems to be smart apes commanding and regular apes soldiering. However, do to the fact that the effects spread to the children, within one or two generations they would all be in the style that we see in the other PotA movies.

In the scene where Caesar finds the canisters in his father's refrigerator, there are three canisters that he takes. When he gases the apes in the rehabilitation center, he only uses two. If the apes at the zoo are all kept in the same area at night then he could have gone there and used a single canister on that group.

This would also explain how Caesar and the other rehabilitation apes knew where the zoo was at. Thus all the apes at the rehabilitation center, the zoo, and Genesys Labs, would have been intelligent.