Pon Farr in the new timeline

We are driven by forces we cannot control to return home and take a wife or die.

Apparently, if a male Vulcan is unable to return to Vulcan during Pon Farr, he will die.

In the new timeline from the 2009 movie, a few thousand Vulcans have survived and started a colony on a planet called New Vulcan.

What will happen to the males when they go through Pon Farr and are unable to return home? Is the Vulcan species doomed to extinction?

There is also the issue of the Romulans, and possibly the Mintakans and Rigelians: one or more extant species who split off from the Vulcans in the relatively recent past. If the planet were a biological requirement, it was either one which the proto-Romulans managed to overcome in the wake of a planetary war and exodus, or something requiring as much hand-waving to add to the Amok Time-era Vulcans as it does to remove from Star Trek III and later Vulcans.

Based on the fully canon 'Star Trek: Ongoing' comic After Darkness Part I, it appears that Vulcans are just as capable of undergoing Pon Farr on New Vulcan. 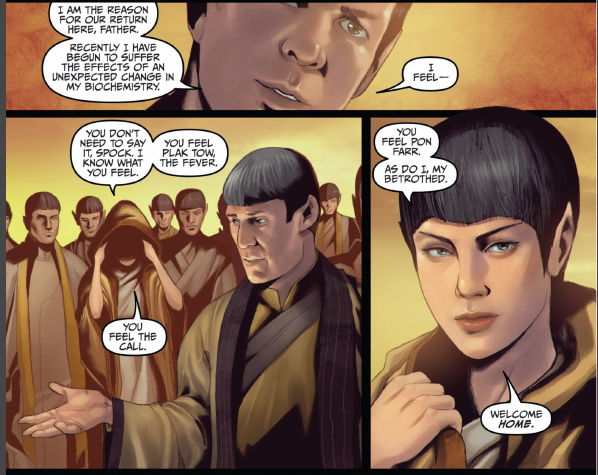 23
Does the new Star Trek timeline have a new mirror universe as well?
11
Was Pon Farr Always a Seven Year Itch?
34
Do Romulans experience a pon farr every seven years?
20
Was Pon Farr confirmed to be initially a male-only idea?
6
Reason for 'Pon Farr' being so called?
3
Vulcan biology and Pon Farr
4
At what age does Pon Farr start?