Did George Lucas base Darth Vader on Lightning from The Fighting Devil Dogs?

After reading this question, I vaguely remembered an article I read online at some stage in the last few months, which lead me to post this answer.

I've searched and searched online but I can't find any quotes or real evidence that Lucas actually based Vader on Lightning from Fighting Devil Dogs, even though it seems to be commonly believed across the interweb. Just Googling fighting devil dogs darth vader produces a bunch of hits. I'm not going to link to any of the articles or blogs here as any I found don't provide any references themselves. Can anyone provide any actual evidence to prove that this is true? Or am I just a filthy liar?

I know Wookieepedia isn't canon, but it's mentioned in there, with no reference of course...

The design of Darth Vader's armor was influenced by the costume worn by The Lightning, a villain in the television series The Fighting Devil Dogs, and the Japanese Samurai masks

They really do look very similar... 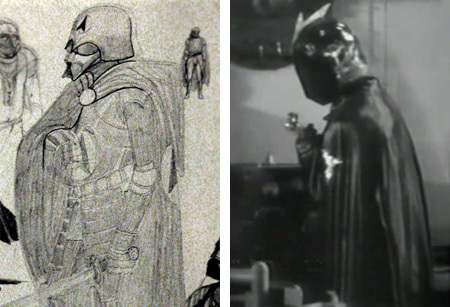 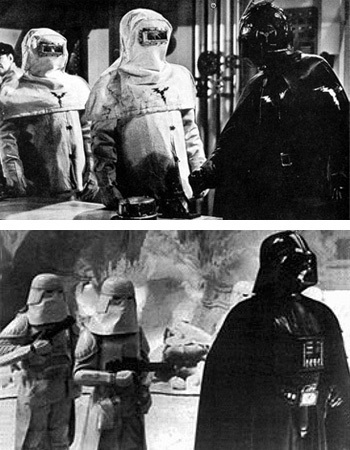 Most sources that posit a link between Vader and The Lightning admit that said link is based on speculation. This is the best summary I was able to find:

Darth Vader: The Lightning In The Fighting Devil Dogs
George Lucas once said, “With both Star Wars and Raiders, I started out by asking myself ‘Gee, when I was a kid what did I really like?’” The answer was that he loved the old serial adventures of the 1930s.

One of the earliest costumed supervillains in cinema was The Lightning, who appeared in the 12-chapter serial The Fighting Devil Dogs (1938). The Lightning wore a black leather costume, gauntlets, a helmet, and a cape, and it’s been speculated that these are all elements Lucas borrowed for Darth Vader, although Lucas has never actually confirmed that. Both Vader and The Lightning also had minions who wore all-white armor and helmets.

The Lightning, however, was not a mouth breather like Vader. That originated from artist Ralph McQuarrie, who was tasked with creating conceptual drawings of characters prior to the principle filming of 1977′s Star Wars Episode IV: A New Hope. In an early draft of the script, Vader was supposed to transfer from the Star Cruiser to Leia’s rebel ship via the vacuum of outer space, so McQuarrie drew a respirator on Vader’s mask. “George loved it,” McQuarrie said, and the respirator and the creepy, labored breathing became a permanent fixture of the Sith Lord.

This article quotes another piece, a 1981 article in the New York Times:

''With both 'Star Wars' and 'Raiders,' I started out by asking myself 'Gee, when I was a kid what did I really like?' '' Mr. Lucas recently explained. He liked the derring-do of the serials, and the unbeatable courage of their characters, not to mention the 30's settings. ''Practically every movie star of the 30's has one movie like this, be it Alan Ladd or Clark Gable or whoever - playing a soldier of fortune in a leather jacket and that kind of hat,'' Mr. Lucas said, referring to Mr. Ford's snap-brim. ''That's a favorite period of mine, but it was more the character we were after than the period, although they're obviously both rooted in the same ground. I took that character and put him in outer space and it worked just fine - not the same character exactly, but the same concept in terms of story and entertainment value.''

George Lucas has stated on several occasions that he was inspired by the serials & TV shows he watched as a child. Thus it's entirely possible that The Lightning was an influence without being a direct inspiration. The end result is probably inspired by samurai armor (like everyone has said) while also being influenced by other sources like Fighting Devil Dogs.

Richard Bruce (BA, MA, PHC Economics) and others posit that Marvel's Dr. Doom was a major influence as well. The following excerpt is from his website:

In the last several decades many people including myself have tried to find out where Lucas got his ideas. Lucas helped by leaving plenty of clues.

Lucas also drew a connection between Vader and Doom at the beginning of the first Star Wars movie made, and the fourth in fictional time line, "A New Hope." The first thing that Vader does is question a captured rebel soldier while holding the soldier by the throat. Vader extends his arm straight out holding the soldier off the floor. Obviously this would take enormous strength and establishes Vader as a character of enormous power. In the comics Dr. Doom commonly questioned people in exactly the same way. It was one of Doom's many trademarks. The comics fan should immediately recognize that Lucas is saying Vader is based on Doom.

Dr. Doom was horribly disfigured when one of his experiments ended in an explosion. At least this is an origin story I read. There are frequently several versions of an important character's origin in comics. Therefore Doom covered his body in armor and his face in an iron mask. Darth Vader's face and body are similarly disfigured, though not in an experiment, which is why Darth wears a mask and his black outfit.

You may remember that in the "Empire Strikes Back" Darth Vader with his back to the camera takes off his mask and helmet, looks in a mirror, then puts the mask back on. This was a standard routine for Dr. Doom and another way that Lucas announces the source of his character to the comic book savvy.

Not the answer you're looking for? Browse other questions tagged star-wars darth-vader george-lucas or ask your own question.

15
Why did Vader need the cape at all?