I'm trying to remember a short short in the Golden Age of SF (1920s-1950s) where the following was written:

Very old short story, told in the classic Golden Age SF style. No idea as to whom the author was.

One of the salient facts not mentioned in the question is that the story is dominated by discussion of the financial transactions the agent makes as part of his uplift plan. Hence the punning title: "high yield bonds" while he is in "bondage". 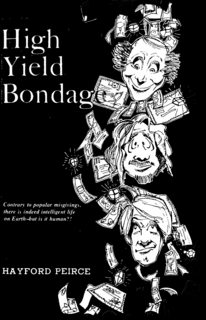 human from offworld came to a colony planet

The alien was close to human, but it turned out not actually related:

... beings in brown uniforms, apparently from evolutionary stock similar to Huntleader Riderson's, got out to point instruments and take rock samples." ... "Professor Camptargo will be extremely vexed: his lifelong determination to prove that the entire galaxy’s sentient population is derived from the Great Migration of 31.000 years ago has already been proven suspect. As the first expedition into this arm since the Black Collapse and the Interregnum of 27.000 years ago, we have already learned that the beings of this world are not of our stock."

human was an agent sent to uplift world into interstellar civilization
human needed to change politics, manufacturing, science, and schools upon the world

This is not correct. He was sent to survey the planet, but crashed, and found it necessary to uplift the planet in order to effect repairs to the ship.

"I have determined the extent of the damage to the ship and have conceived a basic plan regarding its repairs .... At the least, it is the unsuspected subjugation of the geo-political unit in which we find ourselves. At the most, merely the conquest of the planet."

human first cloned himself to be different people, one for each area of study that needed to be changed in the world

“Your brothers, Hunt, those extra hands I promised you some time ago.”
“My broth— Oh. Clones. You’ve been growing them in the vat.”

One was shorter than himself and darker, the other taller and thinner. By their facial traits they might have been his cousins.

because it would be bad if they were identical

"It would be inconvenient in our dealings with this world, for us to seem as identical as we are."

I specifically remember the agent using a matter conversion device to change the economy of the world. He was laughing as he pushed an encyclopedia book into the device's input hopper with the result being more and larger jewel-quality diamonds coming out the other side. This wasn't matter duplication or even molecular disassemble/reassemble, but transmutation in real-time.

The device was referred to as a duplicator, but you're right about its operation -- it required feedstock. Here's the diamonds quote:

He placed an uncut diamond into a softly humming machine. A beautifully cut gem popped out. He smiled. He looked about, found a hefty one-pound tome issued by the South African Chamber of Commerce; South Africa, An Industrial Profile. He stuffed the book in. A pound of cut diamonds spewed forth. He laughed aloud.

The agent fully intended on crashing the economy to change it.

As I said earlier, the point was to repair the ship, and to do that, the planet had to be uplifted:

The real problem was the betwixt-and-between state of this world’s technology. High enough to have invented double-entry bookkeeping, the creditcard economy, the IRS Gestapo; low enough to be incapable of producing a simple main-drive and gravitationless chamber for an old-fashioned SpaceMaster-Scout Mark IV. Without some well-directed inspiration it would be three or four hundred years before this planet’s technology could effect the necessary repairs.

I think the short story did not end with the planet's population joining the interstellar civilization, but it was inferred.

“The Earthlings are mounting their first expedition to Centauri next year. One of these days, when they land in the University football stadium he’ll be even less pleased.”