I remember watching a Spider-Man cartoon TV episode. The TV series was probably Spectacular Spider-Man, but I am not sure. Here are the details I remember:

I have already googled without any luck. Can you please identify that cartoon TV series and the episode?

Update:
Some features of the villain:

Update 2:
I saw it before Spider-Man 2 movie was released. It's because when I saw the train stopping scene in the movie, it looked familiar to me.

The episode is "Heroes and Villains" from Spider-Man: The New Animated Series

The villain is Turbo Jet, a former engineer working for NASA (possibly as a contractor at a high-tech firm) who developed a high-tech space suit that allowed the user to travel at high speeds, and use an unknown force to attract or repel objects. After being fired for stealing supplies, he continued work on his suit, stealing items at the bequest of a man in a nice suit (implied to be an associate of The Kingpin) to gain further funding, finally completing it, and deciding to use it to commit further crimes, both to acquire more money and to gain recognition for this theories, before eventually being defeated by Spider-Man who more or less overwhelmed him with webs before destroying his controls.

As you can see by the image below, the suit matches your description. 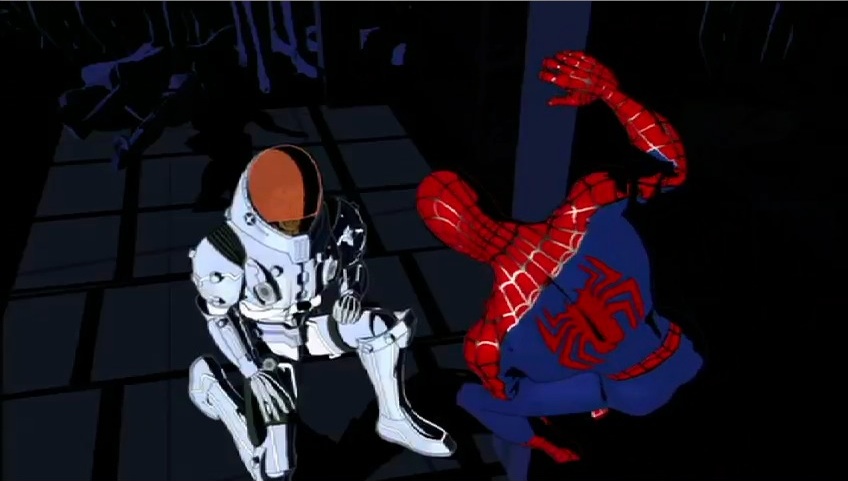 Not the answer you're looking for? Browse other questions tagged story-identification tv spider-man episode-identification marvel or ask your own question.

38
Why does Spider-Man shoot webs from his wrist in the movies?
8
Why didn't Spider-Man gain natural spinnerets with his initial powers?
4
Identify a Spider-Man comic featuring Spider-Man saving Jameson's astronaut son
9
Identify an Iron Man animated TV episode in which Iron Man recharged his armor using a Walkman
8
Which 1970s Spider-Man cartoon had sentient alternate dimension plants?
7
Who and when was this Action Man villain in constant pain?
9
Looking for a Spider-Man comic from the 1970s where a telepathic man-child controls a town, is defeated when Spidey "deafens" him?
12
Martial artist ally of Doctor Strange in a Spider-Man cartoon
12
Which issue of which Spider-Man series had Spidey fighting a villain in a white costume with black spots?
10
1970s live action Spider-Man TV series fancy dress/costume party episode