Why are Star Trek ships (mostly) built by hand?

In the middle of the episode "Eye of the Beholder" (from the seventh season of Star Trek: The Next Generation) one of the crew members says to Troi and Worf that [no direct cite] the entire ship was built by people at Utopia Planitia. There were people virtually everywhere and he recalls himself placing some cord "right beyond that panel".

It is the 24th Century, right? Currently, four hundred years before that time, we have fully automated plants, that are able to produce most of a car, ship or plane, if not entire ones, with little or no help from human efforts. How can we imagine (taking today's progress of science as a base), that in the 24th century ships will be built using human power mostly or only? How can we believe that after the next four hundred years someone will be manually placing a cord somewhere?

Automated production lines and using pure robotic sections in plants are not a 21st Century discovery. There were available (at least in the automobile industry) back in the early 1980s, if not earlier. Star Trek: The Next Generation writers and producers must have known this.

Is there any in-universe or out-of-universe explanation as to why they decided to push this matter to a level where it becomes hard to believe, i.e. that 24th Century ships are built by hand and by human power?

This question is related to "Why are there so few robots in Star Trek?", but only in the context of robotic machines designed to automate or aid in production and building processes — not about full-featured androids intended to replace (biological) human engineering crews.

Because that's how ships are built now.

A lot of the assumptions underpinning your question are flat out wrong. Far from it being unbelievable that ships are built by hand, and far from it being the case that in the 20th century we turned every construction job into a robot-manned automated assembly plant, in the real world right now there are people whose jobs are to do exactly what that character in a sci-fi television series did: power conduit installation and wire pulling.

"I remember running a power conduit right behind that wall there." — Walter Pierce, "Eye of the Beholder

In the U.S. Navy they are called Construction Electricians.

In the real world, you do get teams of thousands of people working for years, and figures bandied about such as "900 miles of cable" (the amount used for the U.S.S. Ronald Reagan) and "3 million metres of cable" (the amount used for HMS Queen Elizabeth). According to an article in The Engineer, electricians were making "10,000 electrical terminations per week" at one point during the construction of the Queen Elizabeth.

If you want to know even more on how this is done in the real world, the U.S. Navy has published a training manual for construction electricians. Conduit installation, and cable pulling with fishtape, is covered on pages 5–27 to 5–36. There are no robots. ☺

Simply put, Rodenberry didn't like robots. Robots, robotic technology and "self-aware" machines were a bugaboo for Gene Rodenberry's idea of the future. There are very few episodes where self-aware machines or even dumb robots were in place instead of human effort. Rodenberry believed in the idea of an empowered and enlightened Human future. Just because you CAN build androids, doesn't mean you should. 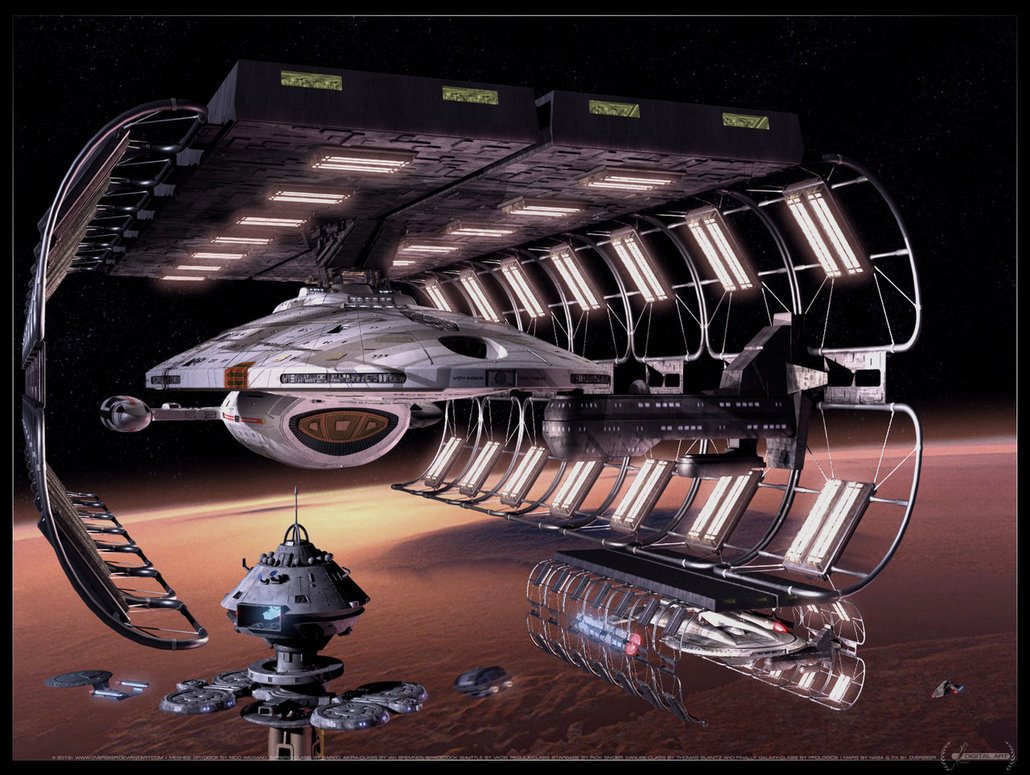 It's not just starships, I imagine most things in the Federation are replicated and then put together with human effort. People don't HAVE to work, but there's nothing saying they might not WANT to. Robots remove labor from the workforce (as we can see on Earth already) but when people are unemployed and there is still a profit engine, unemployment means disenfranchisement.

When Lily Sloane asked how much the USS Enterprise-E cost to build, Picard tells her "The economics of the future is somewhat different. You see, money doesn't exist in the 24th century... The acquisition of wealth is no longer the driving force in our lives. We work to better ourselves and the rest of Humanity." (Star Trek: First Contact)

In a future without money, employment is opportunity to do something new, different, interesting and something you want to do everyday, because you want to. No one works a dead end job in the Federation, because, presumably, everyone is doing what they would LIKE doing.

When Nog suggests that Jake should bid for a baseball card in an auction, Jake says "I'm Human, I don't have any money." Nog replies "It's not my fault that your species decided to abandon currency-based economics in favor of some philosophy of self-enhancement." Jake says "Hey, watch it. There's nothing wrong with our philosophy. We work to better ourselves and the rest of humanity." Nog then replies "What does that mean?" Jake responds "It means we don't need money!" Nog quickly points out, however, that Jake wouldn't be able to bid or borrow. (DS9: "In the Cards")

The first truly successful androids in the Federation were the Soong-type androids created by Doctor Noonien Soong. Most notable of these was Lieutenant commander Data, who served as operations officer on board the USS Enterprise-D and USS Enterprise-E. (Star Trek: The Next Generation)

The androids of the planet Mudd originated in the Andromeda Galaxy. They were constructed by an unnamed humanoid species for the purpose of performing necessary service functions, freeing their makers to evolve a perfect social order. Using a combination of irrational behavior and logical paradoxes, the androids were eventually overcome by the Enterprise crew with the assistance of Harry Mudd. With the androids incapacitated, it became possible for the Starfleet personnel to reprogram the androids to continue once again the project they had been sent to the planet to accomplish. (TOS: "I, Mudd"; TNG: "Conspiracy")

Look at it this way: given AI sophistication, if you used lots of robots and someone got on board your ship or in your station and could crack their defense codes, they would suddenly end up with a large number of robotic death machines which used to belong to you and now belong to your enemy. Perhaps the civilizations of the Alpha quadrant simply want to avoid such an unfortunate circumstance and keep people artistically employed.

we have fully automated plants, that are able to produce most of the car, ship or plane,

Car manufacturing has a lot of automation. We also make a lot of them. We make rather fewer small watercraft, not that many Boeing 777, and a very small number of identical ocean liners or capital ships of the line (note the keyword "identical"). As volume goes down the per-unit cost of automation goes way up to where it is unaffordable. Assembly lines are not all that interchangeable - if you tool up for cars you can't recycle the line for buses - you dismantle the factory to the bare walls and rebuild as a bus factory.

So, as the number of Galaxy-class starships barely cracked the double-digits it was hardly worth setting up any kind of mass production for them.

(Warning, most of my knowledge comes from the books as well as TV shows, so it's possible not everything I'm remembering is "canon.")

Replicators are used to build sections of hull, modules of starships, and smaller systems like shuttlecraft and shuttlepods.

However, remember that every single molecule of an item must be stored in a computer in order to replicate something. For the size of a pizza, I imagine the tech of the future can easily compress and store that data, but for something the size and complexity of a Galaxy Class Starship I imagine this is just beyond their ability.

Replicators also require undifferentiated molecular goop to "transport" and "reconfigure" into the output. (The Next Generation Technical Manual) We can easily extract bits of metal, but I imagine the expenses of producing massive amounts of goop which just turn back into metal would be a bit silly.

Finally, to inject a bit of future politics, in Star Trek, Humans don't work for a living. They do things to better themselves or whatever (see Jake Sisko). While "the wealthy" with military careers and replicators can spend their days writing news stories, I imagine even the Federation has to find jobs for billions of people to keep the economy working. I imagine some of the starship construction is "makework" to keep people busy. They COULD replicate entire sections that could just be welded together, but if you've got 100,000,000 unemployed humans you need to find jobs for them. Why not utilize that resource while saving money on replicator goop and storage space in the computers to replicate subsystems instead of entire ships?

80
Why are there so few robots in Star Trek?
44
Why don't they just replicate ships instead of build them?

50
Was There Ever an Official or Canon Retcon or Explanation For the Eugenics Wars?
17
How long do El-Aurians live?
14
What Did David Gerrold Leave "Star Trek: The Next Generation" To Work On?
27
Are the Star Trek Next Generation rank pips based on anything from real life?
58
Why aren't there any main Federation battleships in the Star Trek universe?
0
How does Data know what Bingo is but not what perfume is?
159
Why are there so many 47s?
7
Did Samuel Clemens ever get his watch back?
54
Starship Enterprise: Always flying left-to-right?
10
In Star Trek, are the humans actually all speaking English?