Fewest LEGO sets to get all the new Avengers?

Back when Avengers came out, there were related LEGO sets released. I picked up as few as possible to get all of the Avengers minifigs. With Avengers: Age of Ultron out, LEGO's released a bunch of new LEGO sets related to the new film. However, they split up the characters across various sets, so there's no trivial way to buy the entire team. I'd like to pick up the fewest number of sets to get the minifigs for the new Avengers. Based on the trailers, that means 3 characters: Scarlet Witch, Quicksilver, and Vision.

What's the fewest number of LEGO sets I need to purchase to get the new Avengers minifigs?

My sources tell me that it looks like you'll need 5 out of the 6 total Ultron sets to get the new characters;

If you want to save yourself around $200 you can buy them individually from a Lego minifig store or from Bricklink. 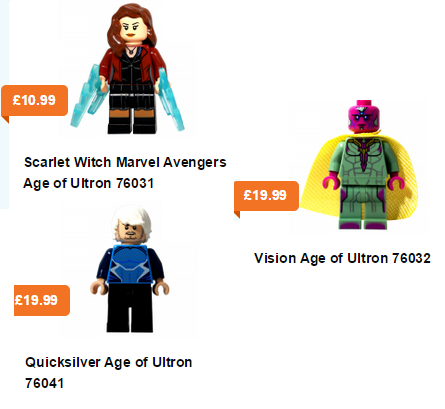 12
Where do I need to start, to understand 'modern' Avengers?
3
Couldn't Marvel use any of the Avengers characters?
10
Which MCU characters are shown to be worthy of Mjolnir in the comics?
11
How did the Scarlet Witch and Quicksilver come by their powers?
3
Is the scepter inherently evil in the Avengers?
13
How do the Avengers communicate?
3
Are all of the new heroes in Infinity War classed as Avengers?
6
Can Lego characters die in the Lego Cinematic Universe?