In the comics, who made Daredevil's costume?

In an episode of the Netflix Daredevil TV series, we find out Daredevil commissions a suit from

Melvin Potter, the man who makes the special, armored suits for Wilson Fisk.

Which led me to wonder if a similar character developed Daredevil's outfit, or if Matt Murdock himself has created all of his own costumes.

Since I'm aware Daredevil has had several costumes, the scope of the answers should address as many versions of his outfit as possible. 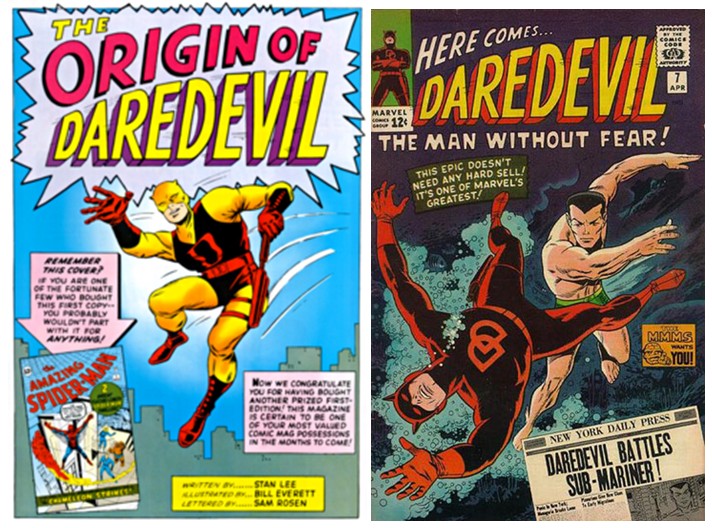 Leo Zelinsky, costume designer to superheroes and villains alike first appeared in The Amazing Spider-Man #502 (2004), and was created by J. Michael Straczynski and John Romita Jr.

Leo Zelinsky was a simple tailor who owned a small shop in a bad neighborhood of New York City. Then, one fateful day, the Thing came in looking for a new costume after losing all his clothes in a fight. Zelinsky designed and made Ben Grimm a new uniform on the spot, impressing the crime-fighter with the quality and speed of his work. Through word of mouth, Zelinsky became a huge hit with the superhuman crowd.

Zelinsky has made costumes for superheroes--such as members of the Avengers and the X-Men--as well as for villains--like Doctor Doom. To avoid confrontation between the heroic and villainous extremes of his clientèle, Leo divides his schedule between heroes and villains. On Monday, Wednesday, and Saturday Zelinsky works for his hero clients; on Tuesday and Thursday he does work for villains.

Leo also maintains a strict confidentiality policy for all of his clients, protecting their identities while he works on their attire. However, Zelinsky once broke this policy when he revealed information about the villain Killshot to Spider-Man in order to prevent a murder. Spider-Man prevented the crime but the masked villain escaped. 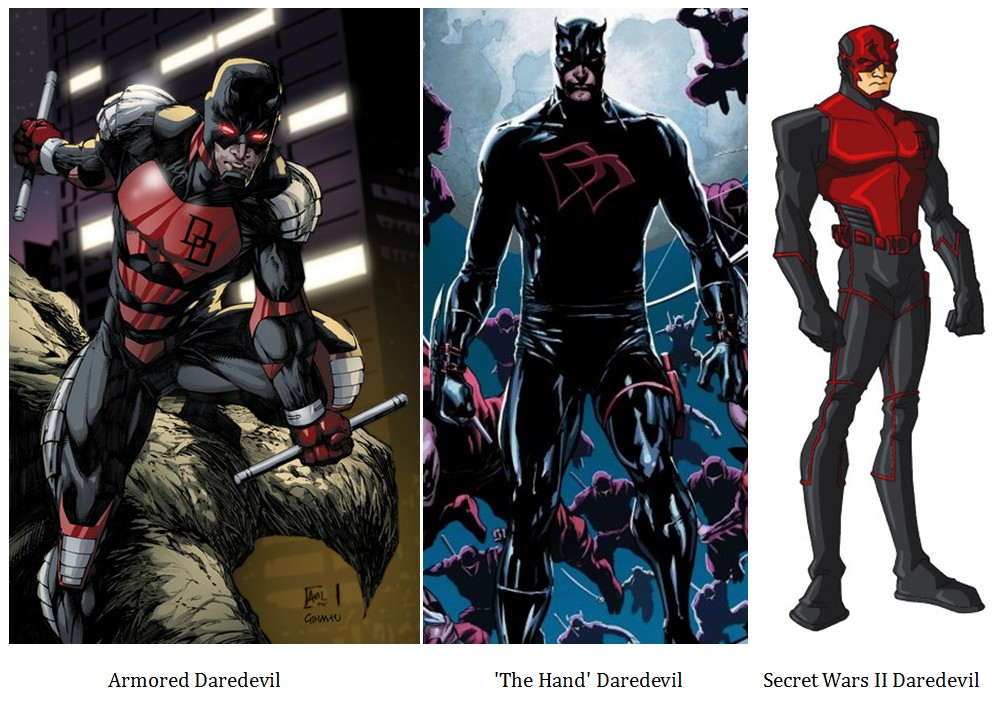 In Daredevil #001 "The Origin of Daredevil" (1964) we learn that he made his own costume (from some old shirts and his father's boxing outfit).

He claims to be able to 'see' the colour with his sense of touch but his choice of clashing yellow, black and red would strongly suggest otherwise. 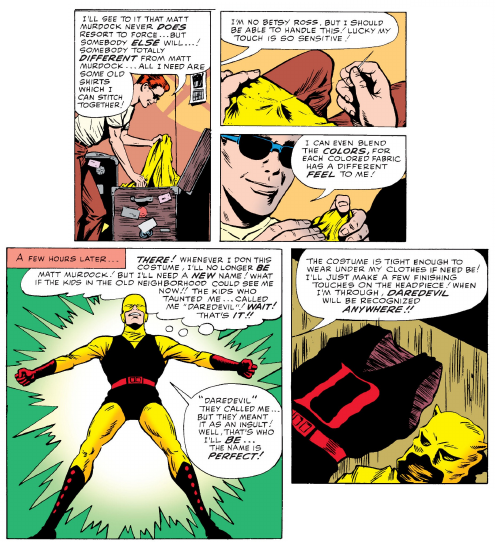 During his run on Daredevil, Mark Waid had several ideas, each one worst than the previous, and among the bottom rock was the new costume introduced in Daredevil #14 (2015).

Matt, having gone public with his secret identity, and being in the process of writing his autobiography, decides to literally drop the mask after a conversation with his publisher, as Daredevil now needs to reflect "who he truly is". He then gets a shave and an actual suit for a costume, the suit being seemingly made by professional tailors. (click to enlarge) 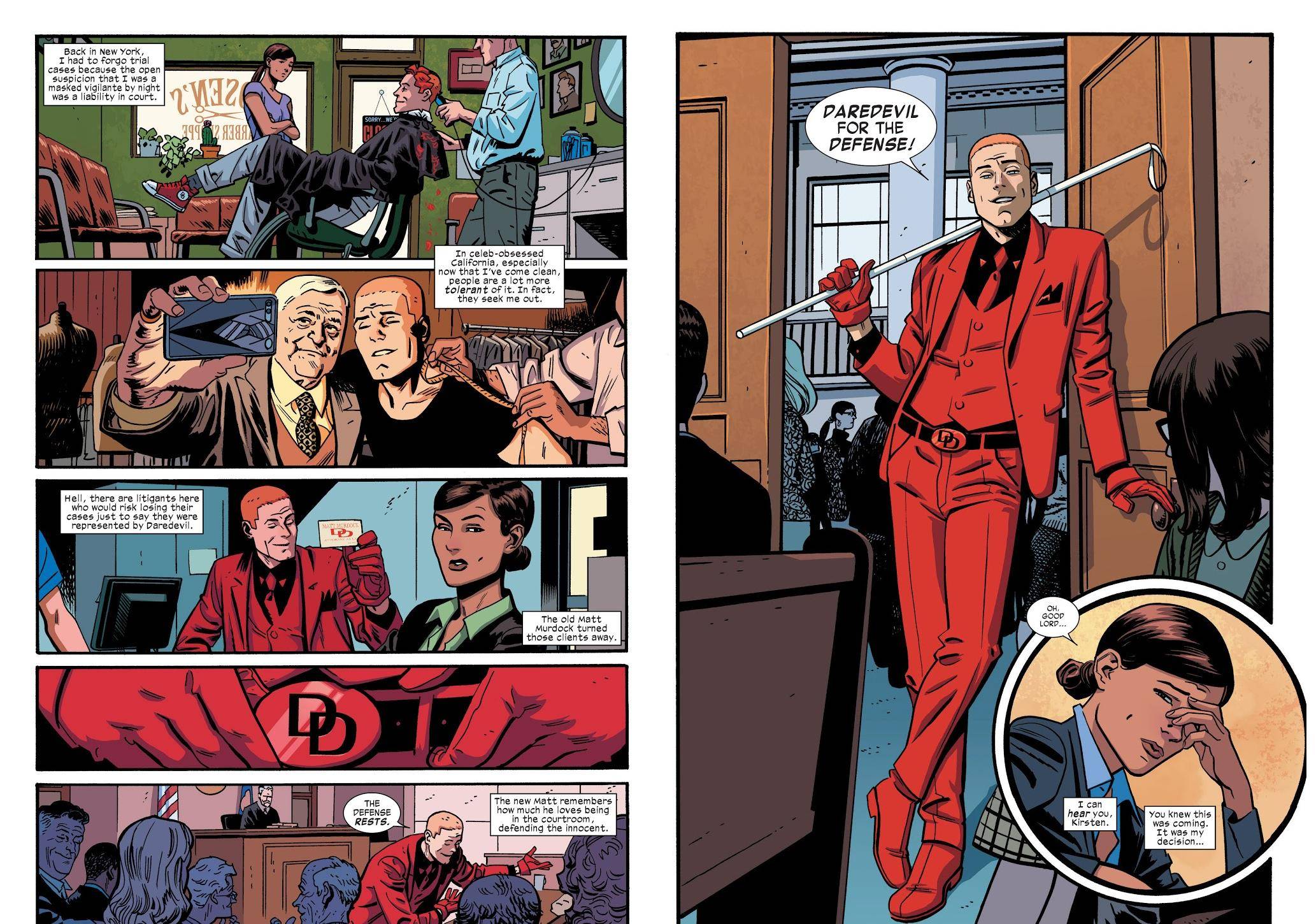 Now you'd think this is the least practical type of suit, but Daredevil manages to fight and do acrobatics wearing it, and by the time of issue #17, we learn that fortunately,

he kept the original suit under the "suit" suit, and Mark Waid's run comes to an end.

He's also apparently had a costume made by "Ronnie", the same costumer who created Gwenpool's outfit, as per issue 1 of Gwenpool. 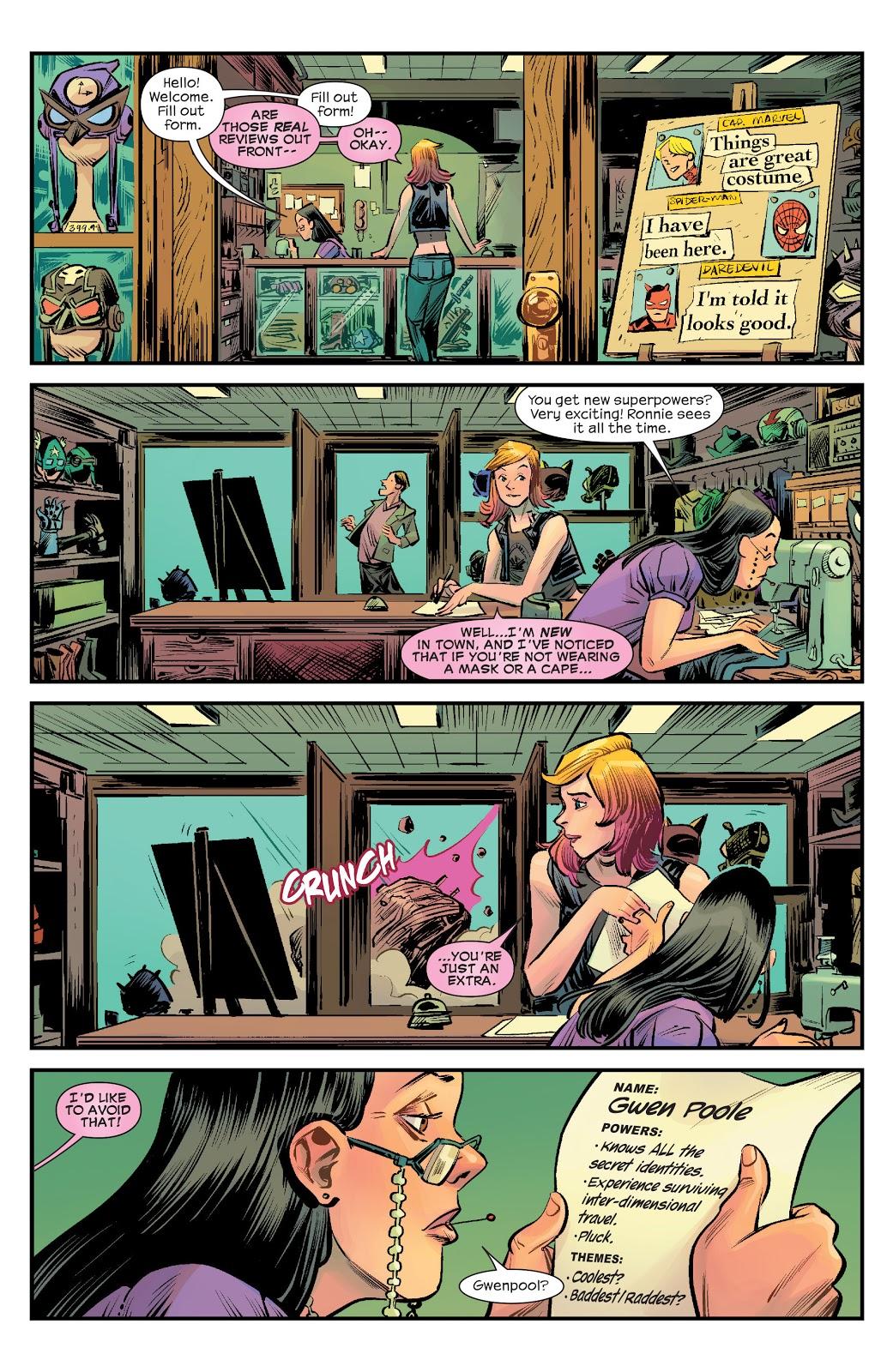 7
Who are the current members of the main Avengers team in the comics?
22
Do Daredevil's enemies know that he's blind?
3
What should I read before watching Daredevil Netflix series to avoid the series spoiling the comics?
7
What are the limitations of Daredevil's hearing?
23
Is Daredevil's suit made of vibranium?
6
Who is this Marvel Comics character?
6
In Marvel Comics, what material is the Infinity Gauntlet itself made out of?
16
In the comics, have any of the Robins called their costume “target attraction” for villains?
5
Is Matt Murdock's Daredevil persona still public knowledge in the comics?