Is David Brin's "Existence" part of the "Uplift" universe?

A lot of reviewers say it isn't, despite the dolphins, but Brin seems to be trying for ambiguity and has stated

'some will argue that my latest novel, Existence is a precursor to the uplift novels. I'll let you decide for yourself...'

I haven't read the other novels in a while, what contradictions or connections are there?

I remember Earth was in a fallow zone for some amount of time. Could all of the crystal virus backstory have taken place there, with species rising and dying, unaware of FTL and the Five Galaxies, etc.?

In the case of contradictions, could this be a reboot?

According to the author, David Brin, on his website, Existence is tangentially related to the Uplift Sagas. 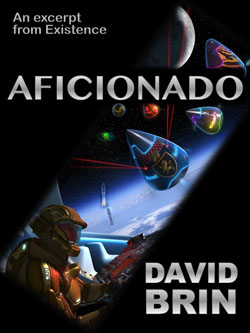 It would seem unlikely.

While the short story "Aficionado" forms part of the narrative of Existence, that is the only reference to Uplift that we see in any of the book.

All interstellar travel in Existence is shown as slower than light. Both the Crystal Viruses and the Von Neumann type probe snippet that originated in the short story "Lungfish". The Uplift universe has multiple ways to evade the barrier of faster than light travel.

Whilst it is on the surface plausible that Existence takes place before contact in the Uplift universe, given that all the sources of Crystal Viruses believe they have no other way to spread than to use the virus method that would suggest large numbers of species that have reached intelligence and are cut off from the Civilization of the Five Galaxies. Given the reaction of other sentients to the existence of mankind as a wolfling race having dozens of them littered around the place, as well as machine colonists making the same mistake, would seem unlikely

Not the answer you're looking for? Browse other questions tagged david-brin uplift-universe or ask your own question.