What fighting style does Daredevil (Netflix) use?

Obviously it's some sort of Martial Arts or a combination, but I'm not learned enough to pin-point which style it is.

What fighting style does Daredevil use?

According to the fight choreographer, Philip Silvera, it's a mixture of styles:

He modeled Daredevil’s fighting style so that it was like that of a seasoned MMA fighter, mixing Matt’s lineage as the son of Battlin’ Jack Murdock, along with his martial arts training by his mentor, Stick. “He's learned everything from wing chun to trapping to silat to kali,” said Silvera. “We wanted to put all those things into the stew and create his own unique style and give him his own flavor.”

In the original 1964 comic; Daredevil #1 ("The Man Without Fear"), it's a style of his own devising based on self-taught boxing and acrobatics: 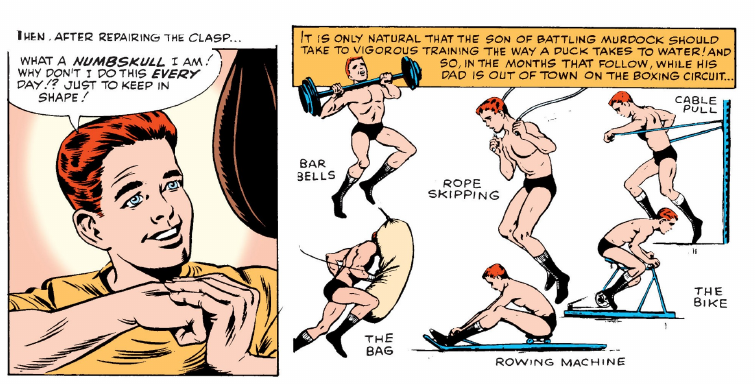 Beyond that, his superhuman fighting skills seem to be largely dependent on his the abilities he's gained from his exposure to radioactive chemicals; agility, reflexes, hearing & touch-sense

And in the rebooted 1993 "Daredevil : The Man Without Fear" comic mini-series (on which the latest TV series seems to be largely based), his fighting style was taught to him by a mysterious man name "Stick"

I can't supply a list of martial arts influences, but then, neither could Bullseye. The page comes from "Daredevil" #181, the lethal assassin stewing in prison, the second panel being the pertinent remark. Bullseye does identify some karate in the mix, but it all blends out as "Daredevil-fu" 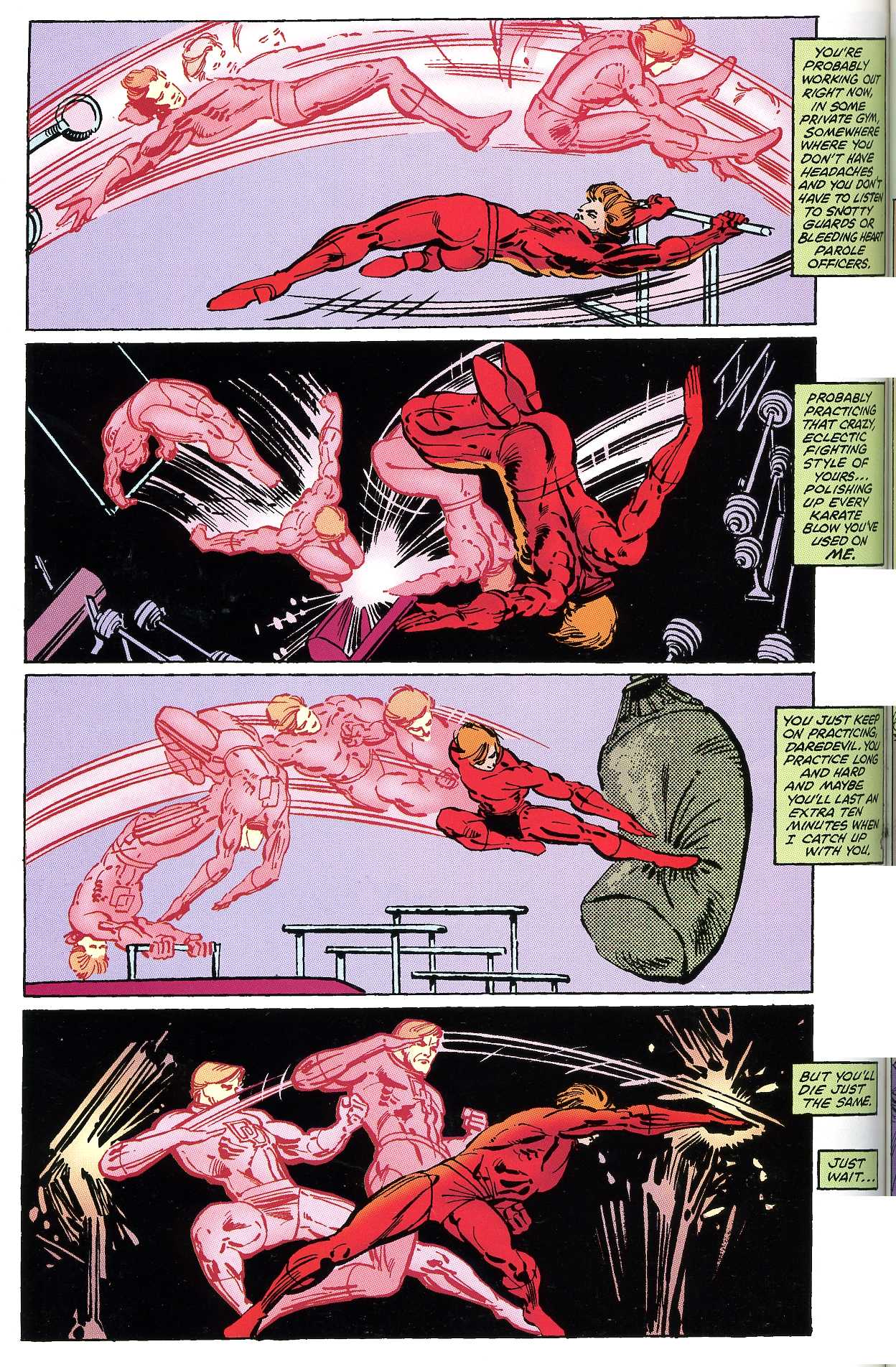 The second page is offered for the exchange "...you're a skilled classical martial artist...but I'm a streetfighter". Which tells me that Daredevil is well-versed in martial arts and then sprinkles on his own razzle-dazzle and, well, dirty tricks. 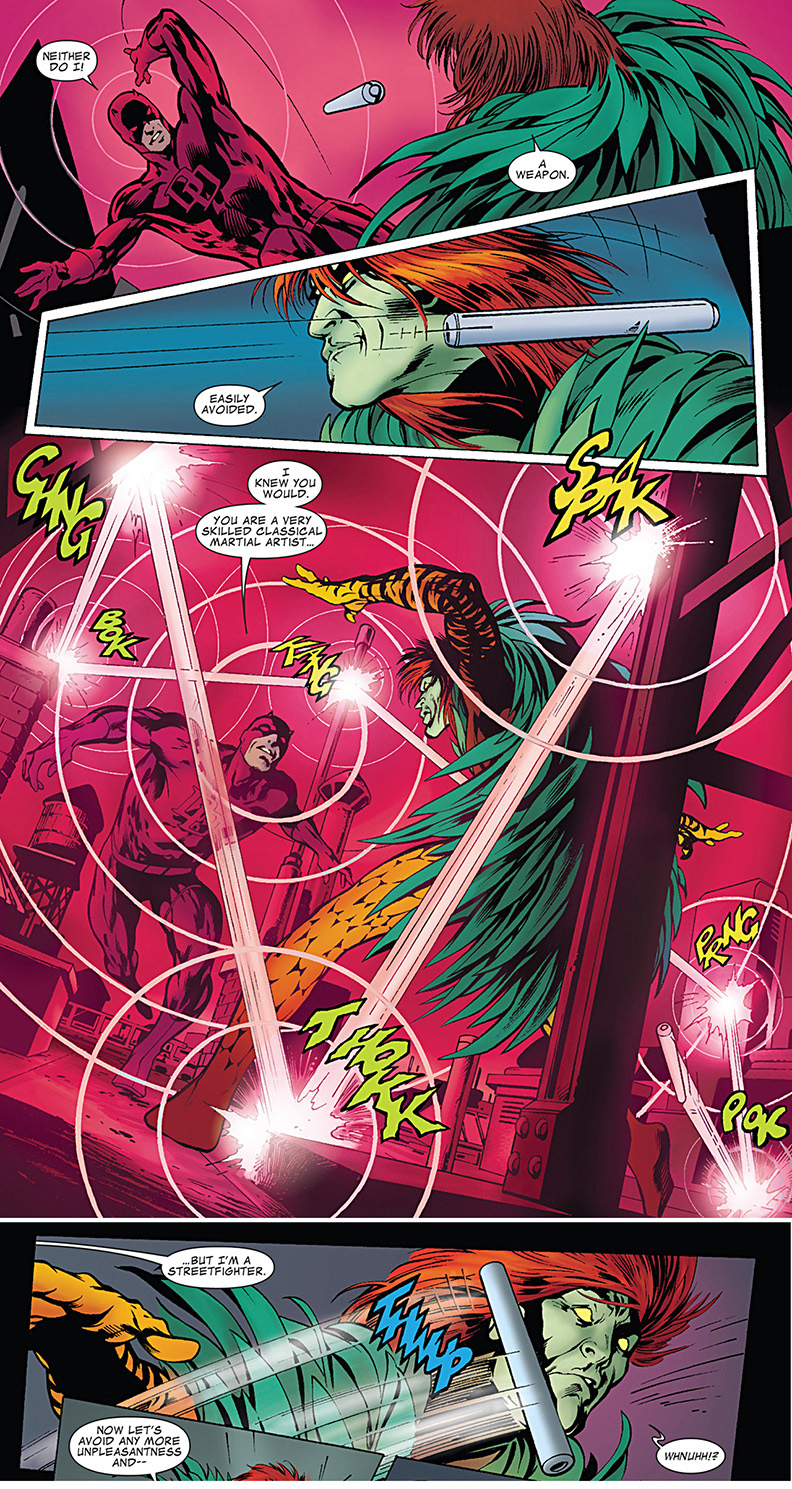 From what I can tell, his fighting style is mixed like Jeet Kune Do, whatever move is the most direct for the immediate circumstance making the swiftest and shortest line between two points. There is European Boxing, Muy Thai Kickboxing, Ishin Ryu Karate, various forms of Kung Fu, and a few others mentioned for his punching. I suspect there is some Krav Maga, Russian Systema, as well as some of the "lost" arts that comprised the CQB aspects of Ninjutsu because it really seems to be battlefield MMA meant to deal with life or death situations. There is some European Wrestling, Judo, Aikido, and grapples from previously mentioned techniques. Kicking is of course used in all of these arts, but Hapkido certainly seems to be present as well as some beautiful use of Capoeira. Parkour is at play for mobility, but free-running was a necessity in Ninjutsu as well. Ninjutsu was actually the art of camoflauge, stealth, espionage, and extreme mobility, not a fighting style. In the Netflix series, Daredevil has been trained by Stick, who has picked up techniques from all across the globe, but with a heavy emphasis on Eastern martial arts. Daredevil has complimented this with his own training borrowing from his father's brawling style of boxing and whatever comes naturally. The show has really done a spectacular job of creating a truly unique fighting style that is both technically rich and absolutely brutal. It's not like Batman or anyone else...it's Daredevil.

I thought it might be Keysi. As seen in Batman Begins and Jack Reacher films, to name but a few. I did some Keysi with the main man himself, Justo Dieguez, a few years ago. But as it has some MMA I can see why I thought it was that style; nonetheless they are excellent fight moves no matter what style is used. This is not a plug, but thought I'd give him a mention.

See him here. He is a very nice man but not to be messed with.

2
When does Daredevil: End of Days take place?
13
Is "the Man Without Fear" just a marketing term for Daredevil, or does it reference something?
39
In the Netflix Daredevil series, is the "Black Sky" concept from any comic?
20
When does Daredevil happen?
5
What should I read before watching Daredevil Netflix series to avoid the series spoiling the comics?
12
How does Zola end up like this in The Winter Soldier?
10
Does Daredevil really only (mostly) take place in Hell's Kitchen?
5
Does Wilson Fisk discover that Matt Murdock is Daredevil?
1
How wide/long is the Quinjet from the MCU?