Do Jaffa Staff Weapons Have an Escalating Effect?

I was just re-watching part of the Stargate: SG1 pilot, Children of the Gods, and saw something that may just be a production writing issue, but it also got me wondering.

When SG1 is about to be executed, Teal'C says, "Many have said that...But you are the first I believed could do it," then turns and starts to kill his own guards, and helps SG1 and the other prisoners escape (and also kills the other Jaffa guards).

After that, when other guards are running to the prison, O'Neill fires a staff weapon at the barred door/gate to the cell and it apparently fuses the lock so the other guards will have to break in. Then, in the same scene, with less than 30 seconds elapsing, O'Neill turns toward the stone wall and shoots it, creating a small opening, then shoots it again, reating a large opening so everyone can flee through the opening.

Now, normally, I'd consider this a mistake in the writing, but both actions (shooting the lock and shooting the wall) take place on, basically, the same script page, so I'd think it'd be hard for a writer to keep the two actions disassociated in his mind.

Do Jaffa staff weapons have a kind of "1-2 punch" effect like the zats? In other words, does firing a second time at the same target deliver a stronger charge? Or is there something else that would explain why the shot at the cell door just melted the lock and the shot at the wall blasted a hole in it?

No. Staffs are always depicted as directed energy weapons. Therefore their destructive effect should be proportional to the heat and concussion resistance of the material being struck, and the number of hits (which means more energy).

So the scene you describe should have worked the other way -- it should have blown the lock off (since it's a bunch of metal pieces mechanically held together) while the stone walls should have held for quite a while (they're temperature resistant and there is a lot of weight keeping the stones in place.

I attribute it to the writers taking some liberties to get the story moving. Remember that on the Nox planet, a single blast each killed the entire team (including Teal'c) instantly, while during the assault on Earth, Daniel took a direct hit and still kept shooting (and then crawled to a sarcophagus). Serpent guards are routinely mowed down by Teal'c's staff but Teal'c himself survived a number of staff blasts, once even standing up after being hit.

But to answer your question, Staffs do have a cumulative effect, in the same way a hammer has a cumulative effect when we keep smashing the same thing over and over -- it's a matter of energy imparted on the target. But it's not a 'feature-effect' like the Zat.

In the end, I think the power of a staff weapon is proportional to the power required to advance the scene. Unless, of course, it has a regulator dial in addition to the safety release (which opens the muzzle) and the trigger. But I've never seen such a third control. 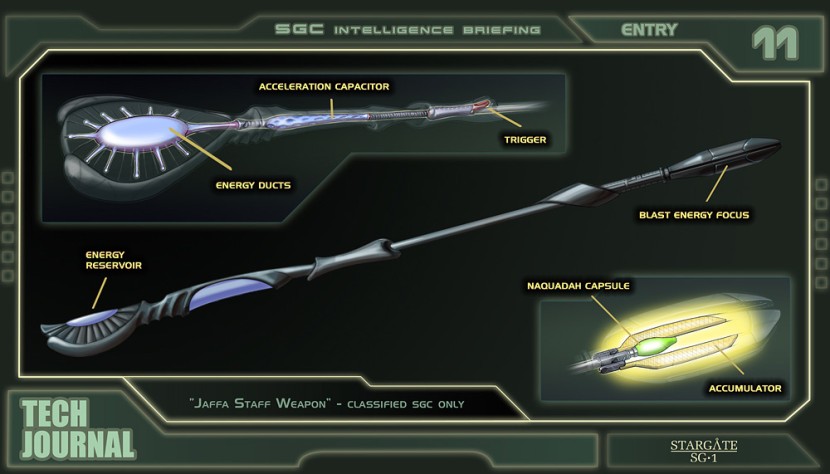 Edit: Looking at the picture above (from Stargate Wiki), it seems that there is only a single control. Maybe the trigger has two depression settings: light pressure activates the weapon, more pressure fires?

There's also a difference in the physics of hitting a piece of rock and a metal gate.

The metallic lock is a great conductor of heat, and it will probably melt easily, securing it in place. Even if it's not a simple mechanical lock, there will be some part that gets stuck in place, preventing the gate from opening.

On the other hand, rock usually is a very poor conductor of heat. Rather than melting, it will tend to crack and cleave (a purely directed energy weapon might not have displayed such a strong effect, but we've seen many times that the staff bolt has a significant kick to it, so it cannot be a pure DEW). The first blast weakened the wall, the second one more so.

32
Why didn't SG-1 bring more Jaffa weapons back through the stargate?
13
Are Jaffa Just Altered Humans?
10
What is the difference between the gold and black tattooed Jaffa?
6
Why do the symbols on Jaffa foreheads differ?
26
What happened to the 'freezing' side effect of gate travel?
6
What happens when Goa'uld Lord enters a Jaffa
16
What happens if a Wraith feeds on a Goa'uld or a Jaffa?
11
Why didn't the Asgard use their own beam weapons?
17
What is the Jaffa armour made of?
13
How can the Jaffa see out of their cobra headgear?