Which car was Tony Stark driving in the end of Avengers: Age of Ultron?

In the end of Avengers: Age of Ultron movie, Tony Stark was seen driving an orange luxury car. It looked like Lamborghini, but it wasn't really Lamborghini (I am very much familiar with lots of Lamborghinis). I tried to look for the brand logo, but without luck.

Which car was that Tony Stark driving?

Tony continues to redesign and evolve his classic armor, just like Audi improved its R8 for 2016. In Marvel’s “Avengers: Age of Ultron,” Tony’s newest Audi R8 features a 5.2-litre-V10 engine, ceramic brakes with brake discs made of carbon fibre-reinforced-ceramics, and quattro® permanent all-wheel drive, proving Tony’s taste are as superior as his vehicular decisions! 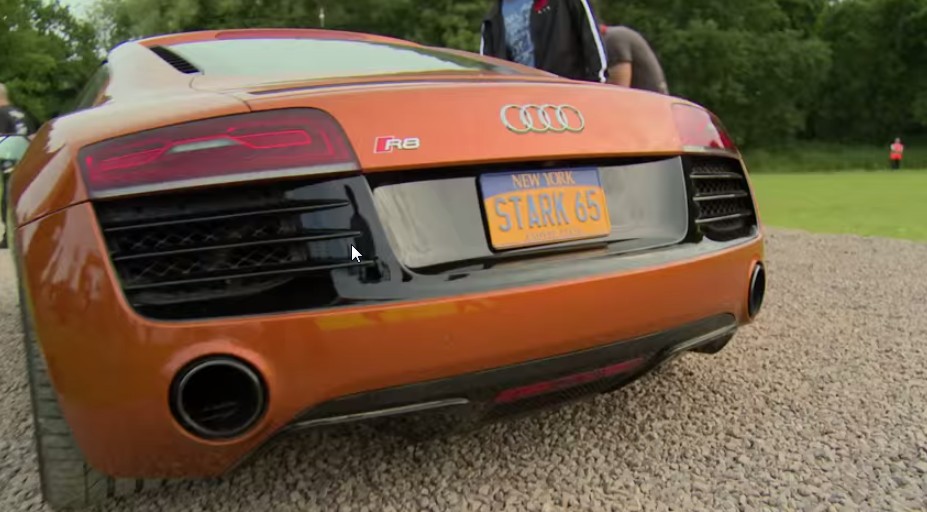 We recently told you that a fleet of new Audis, including the all-new R8 supercar, will appear in the upcoming movie Avengers: Age of Ultron. What we didn’t know at the time was that the R8 used for filming was actually the previous-generation model and not the new one that made its debut last month at the 2015 Geneva Motor Show.

To ensure they have the latest version of the R8 for the movie, however, the development team will use computer wizardry to make the previous model look like the new one, reveals executive producer Jeremy Latcham in the video above. That shouldn’t be much of a problem for the team as one of the movie’s main characters, the Hulk, is pretty much completely rendered using CGI.

20
In the Avengers movie what exactly was Loki's plan for the Chitauri?
8
Identify a Spider-Man TV episode in which the villain was a speedster
38
Why does Ultron hate Tony Stark?
3
Is the scepter inherently evil in the Avengers?
14
Why is Clint not entranced by Wanda Maximoff in Age of Ultron?
10
Why does the Iron Man suit fail to notice someone approaching Tony while in sentry mode?
21
Why aren't the people responsible for creating Ultron arrested at the end of Avengers: Age of Ultron?
14
What authority does Tony Stark have to claim back the shield of Captain America?
27
What did the Scarlet Witch show the Hulk/Bruce Banner?
7
Which car was Tony Stark driving in the end of Iron Man 3?