Set in a fantasy world with shape shifting Dragon kings and their warriors. They terrorize the humans, and kill those with magic.

The protagonist is the great-grandson of a powerful warlock. He finds out that he has magic, and fights with it to save his new friends, the Griffin, Blackhorse (I think that's his name), some creepy necromancer who is immortal, and Gwen (fellow sorceress), along with the kingdom that the Griffin rules in.

They fight the protagonist's father, the leader of the Dragon kings, the king's Duke, and the creepy sorcerer, who has a curse (when he dies, he changes side from good to bad, or bad to good). I have no clue what this is called, but I want to find out, since I'm out of things to read.

I think this is likely the Legends of the Dragonrealm series. It features Cabe Bedlam,

a mere youth cast adrift in a world where none can be trusted. Yet at his command is a formidable arsenal... a fierce warrior tradition imparted by regal, still-living forbears... the fabulous gifts of the witch Gwen, the ravishing Lady of the Amber... and the magical Horned Blade, the sword that promises its bearer total mastery of the many menacing forms of man and beast"

The antagonists are shapeshifting dragons. Cabe's companions include The Gryphon, Darkhorse, Shade (who is the necromancer who is immortal, noted to reincarnate, whereupon he changes between good and evil), and of course Gwendolyn, Lady of the Amber.

One of their main antagonists is indeed the protagonist's father, Azran, who has become the main villain but a major antagonist is Duke Toma, who is far more sane than Azran. 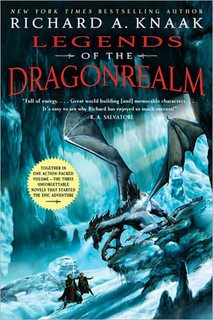 Not the answer you're looking for? Browse other questions tagged story-identification magic magical-creatures dragons or ask your own question.