What's the in-universe explanation for the change of face of Bruce Banner?

Bruce Banner actors in The Incredible Hulk and Avengers are different. Marvel Studios is unfortunate regarding this important thing (they failed to keep an actor even until full phase 1).

But, what was the in-universe explanation given to support this change of face? Or, did they believe that fans are ignorant?

There isn't an in-universe explanation for these types of things.

It also happened when Don Cheadle replaced Terrence Howard as Rhodey from Iron Man to Iron Man 2. In that instance, it's even more clear that the characters are a part of the same continuity (while there can be considerable leeway given to the first HULK movie).

We see that it's being portrayed by a different person, but in the fictional reality nothing has changed.

We're clued in to that at the beginning of Iron Man 2, in which Don Cheadle first enters as Rhodey.

Stark: Hey, buddy. I didn't expect to see you here.

This scene is explained in an interview with Cheadle by Collider to have been a reference to the casting change:

Interviewer: I’m curious about the first scenes you guys shot were the courtroom scene with the senator with Gary Shandling and obviously you’re coming into a role that originated with another actor. How daunting is it or how was it when you first walked on set with that many people and try to still figure out how am I going to do this?

Don: Well, a lot of that was figured out before we began shooting. And really there were no marching orders of, watch the first movie and make sure that you come in here and you’re paying off what Terrance did in the first movie. It was really you’re in character; you’re going to do your own thing. We have to find out what works for this movie and, you know, honor this story which is a whole new story. That’s why I liked how we kind of just dealt with it right up front first scene, first moment that I appeared on screen. Say something about it and then just move on.

Interviewer: What do you say?

Don: What do I say in the trailer? They showed that I think. Yeah, it’s me. I’m here, deal with it. Let’s move on.

What's important here is that Rhodey says, "It's me." There's nothing said specifically about his appearance, and no other character ever makes a comment about Rhodey looking different. So, even though the change was acknowledged for us, the viewers, there was no change for the characters in the fictional reality. The Iron Man 2 opening scene essentially gives us 2 things:

I'm sorry to rely so heavily on the Cheadle/Rhodes scene, instead of anything with Ruffalo/Banner. However, The Incredible Hulk was designed to be both a reboot and a sequel to HULK, so there wasn't a clear continuity there. From The Incredible Hulk to The Avengers, I think the audience is less concerned with the change: The other two movies performed poorly and had a different actor for the title role.

I would note that it's not just Banner that has changed, but his Hulk appearance as well. Not only had he changed facial and body structure, but size and color.

In HULK, he reached about 20 ft in height. In The Incredible Hulk, he's about 9 ft while fully erect. In The Avengers, he's around 7.5-8 ft tall, although we never seen him fully upright. Here are the relevant images presented in the same order:

Here are pictures illustrating his color and other physical difference, again in the same order: 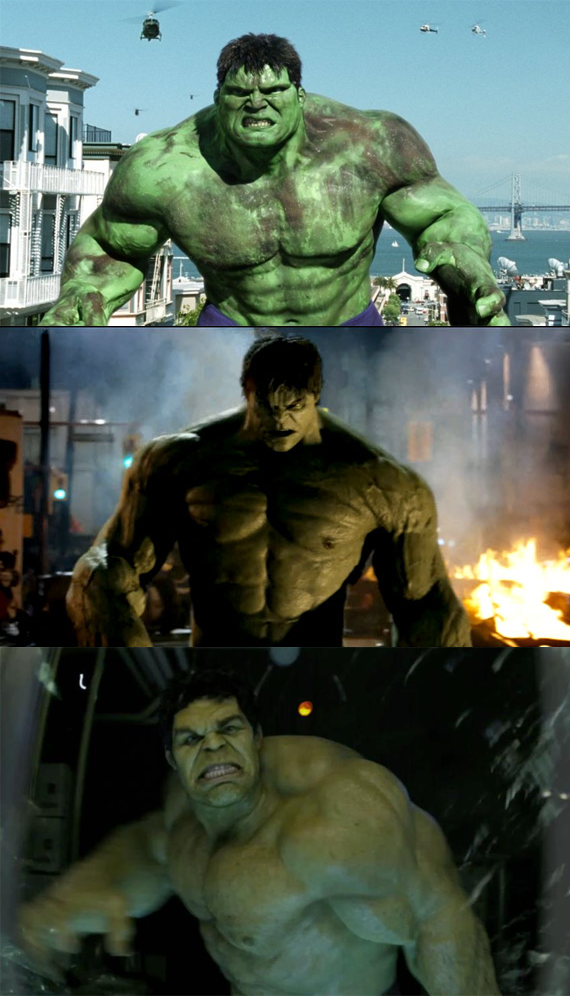 Historically, it's very common for one character to be played by a variety of actors. Looking at plays, for example, where the actor playing lead may change from show to show. There's no reason for an in-universe explanation to break the fourth wall, as they did in Iron Man 2.

Very rarely do movies or shows come up with an in-universe explanation to explain the change in actor's appearances. Famous examples are The Oracle, from the Matrix trilogy, and the Doctor from Doctor Who. However, both of their fictional universes not only have plausible explanations for such a change, but the change is meant to be part of the story.

When it's simply a recasting, the new actor's appearance is not part of the story, and we ignore the change. It's one of the more basic parts of suspension of disbelief.

In-universe, none of those characters look the way we see them. Tony Stark doesn't look like Robert Downey Jr and Thor doesn't look like Chris Hemsworth. We are seeing an abstract representation of events in that universe.

So, an actor can be swapped out and it means literally nothing.

I don't know where the guy above me got that from, but everybody in the MCU actually does look like their actor counterpart, Iron Man looks like Robert Downey Jr. and Thor looks like Chris Hemsworth, Nick Fury looks like Samuel L Jackson, Peter Quill looks like Chris Pratt, and Peter Parker looks like Tom Holland, thats kind of the whole point.

Now as for Bruce Banner, my theory is that Edward Norton got stretched out from turning into the Hulk, and started looking like Mark Ruffalo, Mark Ruffalo might also being using 5% Hulk which makes him look slightly different, also hes a little bit older I guess after The Incredible Hulk so all those 3 things combined might contribute to why Bruce Banner looks so different.

Not the answer you're looking for? Browse other questions tagged marvel marvel-cinematic-universe avengers the-incredible-hulk or ask your own question.

2
Did they ever explain the way Evie's looks changed in-universe?

24
Why is the Hulk's skin green?
21
How did Bruce Banner become the Hulk at will?
15
Could HYDRA have killed Bruce Banner?
8
Why didn't S.H.I.E.L.D. intervene during the events of The Incredible Hulk?
0
Bruce Banner allows Avengers to use the powers of the Hulk despite being horrified by his actions
57
Why did Marvel choose to recast Bruce Banner in Avengers?
12
Is there an objective answer to who "the strongest Avenger" is?
10
What are the rules and logic for time travel set in Loki?