Why does the Batmobile have a "NO STEP" sign?

This (silent) video shows the Batmobile in the new Batman v Superman movie:

However, 14 seconds in we see: 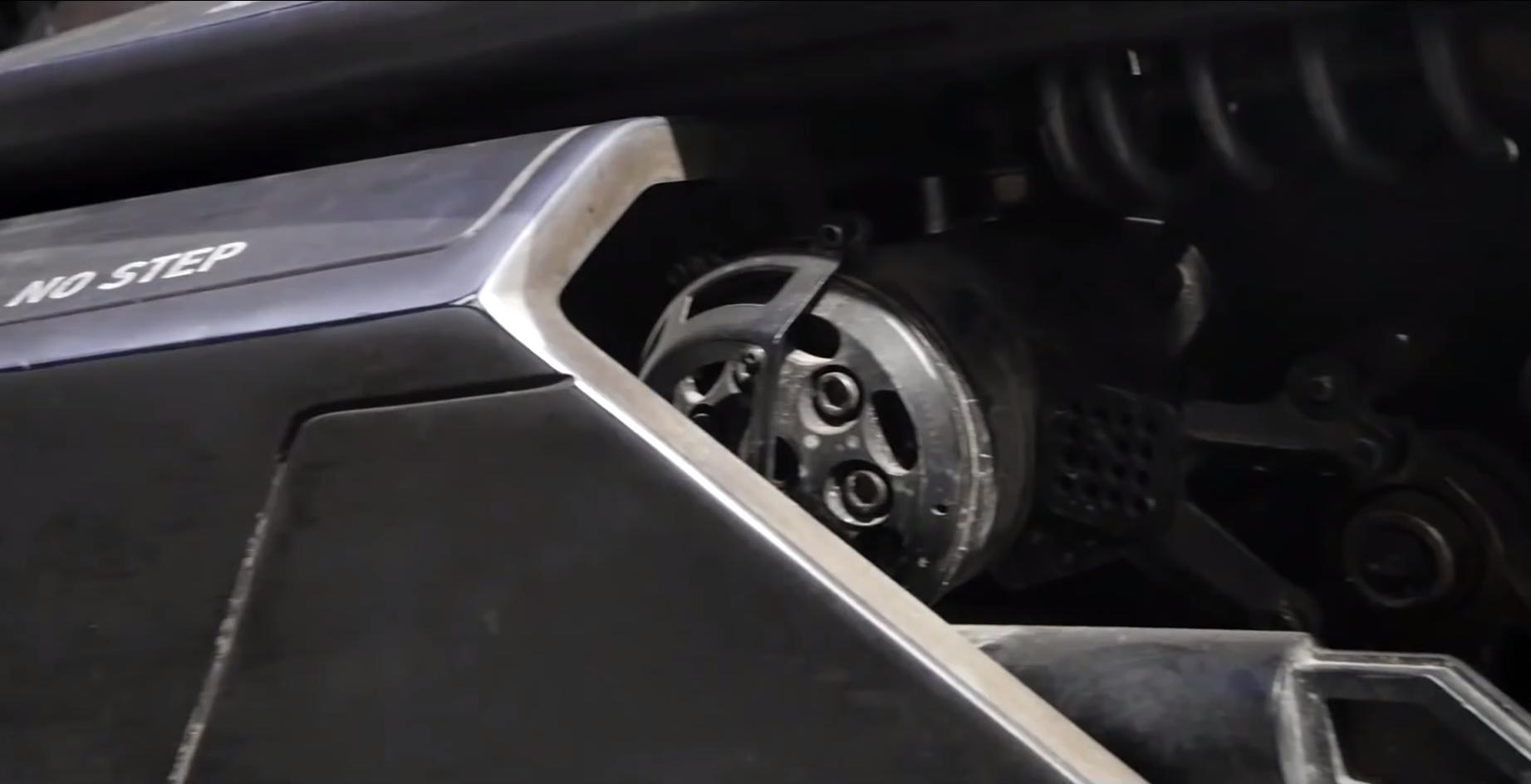 Why would the Batmobile need to have "NO STEP" on the side? Batman knows the risk and it's not like he's running a taxi service. Is Batman worried about getting a ticket from an overenthusiastic Health & Safety officer?

I don't know how chivalrous Batman will turn out to be in this movie, but the Dark Knights of the past have had cause, once in a while, to take civilian passengers. Vicki Vale in Batman and Rachel Dawes in Batman Begins both got to take a ride in their respective Batmobiles after being rescued by their respective Batmen.

So, even if he's not running a taxi service, it's by no means unimaginable for him to bring the Batmobile to a screeching stop, retract the hood, and grunt "Climb in!" to someone in danger. Batman has, of course, anticipated this contingency, and marked an unsafe area—to better protect the citizens of Gotham.

Because it's not only batman who works worked on the Batmobile

Note that the earlier batmobile was designed by one man (Fox), built by others (Waynetech), driven by another (Wayne) and maintained by yet another man (Alfred).

At a minimum there are four and potentially dozens of people who've worked on the various batmobiles, any of whom could have thought that that was a step.

Because the car is built out of stock (airplane?) parts

As Patrick and Monty have pointed out in their comments above, the parts used for the Tumbler were cannibalised from Waynetech's military assets rather than being custom-made from scratch. The same is almost certainly true for the modified Batmobile. These parts may well have been pre-painted with the "no step" designation before they were appropriated for this 'black project'

So he knows where not to step

Since Bruce wasn't fundamentally involved in the design of the car, it's clearly in his interest to know which bits can be stepped on and which bits can't. Causing thousands of dollars of damage to his funky new Batmobile for the sake of a 1$ stencil is not a good tradeoff.

By popular demand, I am reposting my comment as an answer.

Just to clarify, this footage is not the finished product, so don't expect to see this sign to appear in an official release. It will most likely be digitally erased in post-production. You would not see this any more than you would see the wires that hold up the stunt men in an elaborate fight scene.

I seriously doubt the sign is there for Batman, or his damsel in distress. It is most likely put there by the prop master to alert the cast and crew not to put too much weight on that part because it would probably break, or damage something underneath the body panel. Time will tell if I am correct.

It could be a bit of engineer's humor on the part of Batman or the actual builder of the batmobile, like this notice on the Space Shuttle Carrier aircraft: 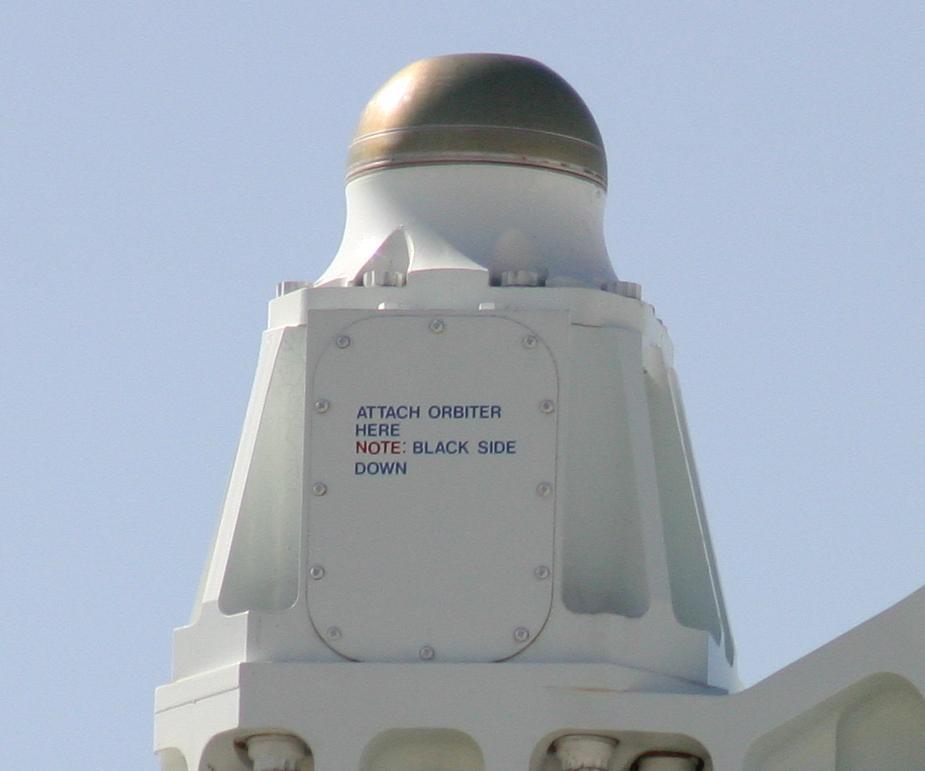 I've interpreted the evidence differently from most here.

I would be surprised if the signage doesn't make the final version. It was placed intentionally, with very neat lettering, to give the Batmobile an 'aerospace-y' or 'high-tech' feel.

If you do a google search, you'll find that most actual 'no step' signs (that are to keep actual people from stepping on some non-weight-bearing surface,) are brightly colored and often red or yellow.

My opinion (and that is all that it is) is that the Batmobile is so marked to give the impression that it might be subject to service by his team of engineers and/or was just provided by the manufacturer (Wayne Industries) with said marking in place. Just like it would be for anyone who ordered one -- as if it is an actual product with all the normal safety / warning stickers in place.

I think (as does Jason Hutchinson who mentioned this first) that it's a label for the film crew since it will obviously be some vulnerable part which cannot support the full weight of a person (or some similar reason).

Judging by the unaltered footage and no music + the fact it says B-roll in the title this is some stock footage which got leaked or released to some network in order to create some anticipation for the upcoming movie.

I don't like this footage, if it got leaked shame on the person who did it, we've seen the batmobile in pictures and will see it in future 'REAL' teasers/trailers/clips just wait till it comes out properly.

If it was intentionally released shame on the film studio, this shows they are not putting any effort into creating a hype for the movie and does not read well for the movie (i'm going with the first option).

But yes the lable is purely for crew, it has nothing to do with things "in-universe".

Sorry to spoil it for ya but there's probably nothing more to it.

You could argue that ground crew at airports and on military bases must be extremely well trained and would never think of stepping on the dangerous parts of aircraft, but manufacturers still plaster "NO STEP" all over them. It's a safety measure. It's a precaution.

I see no reason at all for this not to apply to the Batmobile.

Because stepping could cause damage to panel. 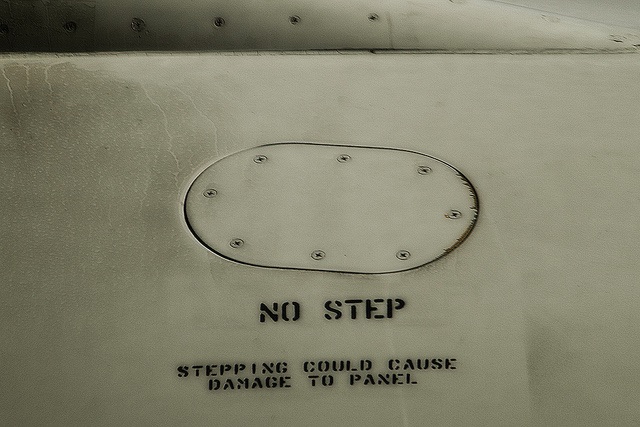 But we won't know until the movie comes out.

154
If only the Sith deal in absolutes, why does Obi-Wan say it that way?
19
In War of the Worlds, what was written on the Tripod?
11
What does this inscription on the Infinity Gauntlet mean?

11
Why does the Batmobile have a changing seat?
9
How did the Penguin know how to sabotage the batmobile in Batman Returns?
10
Why does Senator Finch suspect Superman's involvement in the "desert incident"?
5
Why does the kryptonite spear glow sometimes?
10
How long has Batman been "The World's Greatest Detective"?
10
Why would the Bat-Brand attract violence from other criminals?
10
In Batman vs Superman why didn't Superman just have Wonder Woman stab Doomsday with the kryptonite?
10
Does the Batmobile have a music player?
9
Why does Batfleck have a widow's peak?
9
Has the Batmobile ever gotten stuck in a traffic jam?