Has Wolverine ever beaten The Hulk in a fight?

Wolverine and Hulk are two Marvel characters that have incredible powers of healing/recovery, making them extremely difficult (potentially impossible) to kill. In addition, both of them have super-human levels of strength and power (Hulk because of his anger-based strength, Wolverine because of his adamantium-enhanced bones.)

Have these two characters ever faced off against one another? In particular, has there ever been a situation where Wolverine was able to defeat The Hulk (kill, subdue, or otherwise incapacitate him)?

Well as per Marvel's Ultimate Wolverine vs Hulk comic book series, when Wolverine is hired to kill Hulk (who is in Tibet), Hulk tears Wolverine in half (thats right). He throws the legs 4 miles up the mountain. 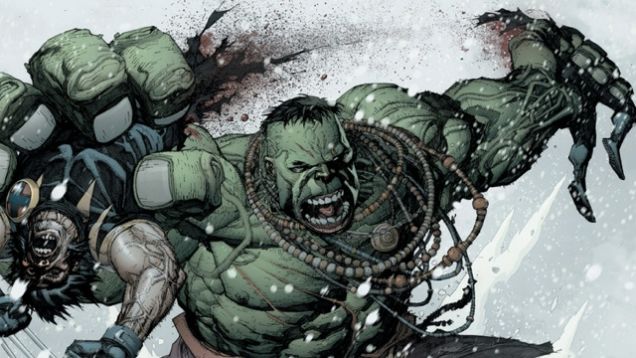 Even with this amount of huge physical damage Wolverine is still alive and using his keen senses finds his missing body parts. He does so by sniffing it out (handy power I must say). 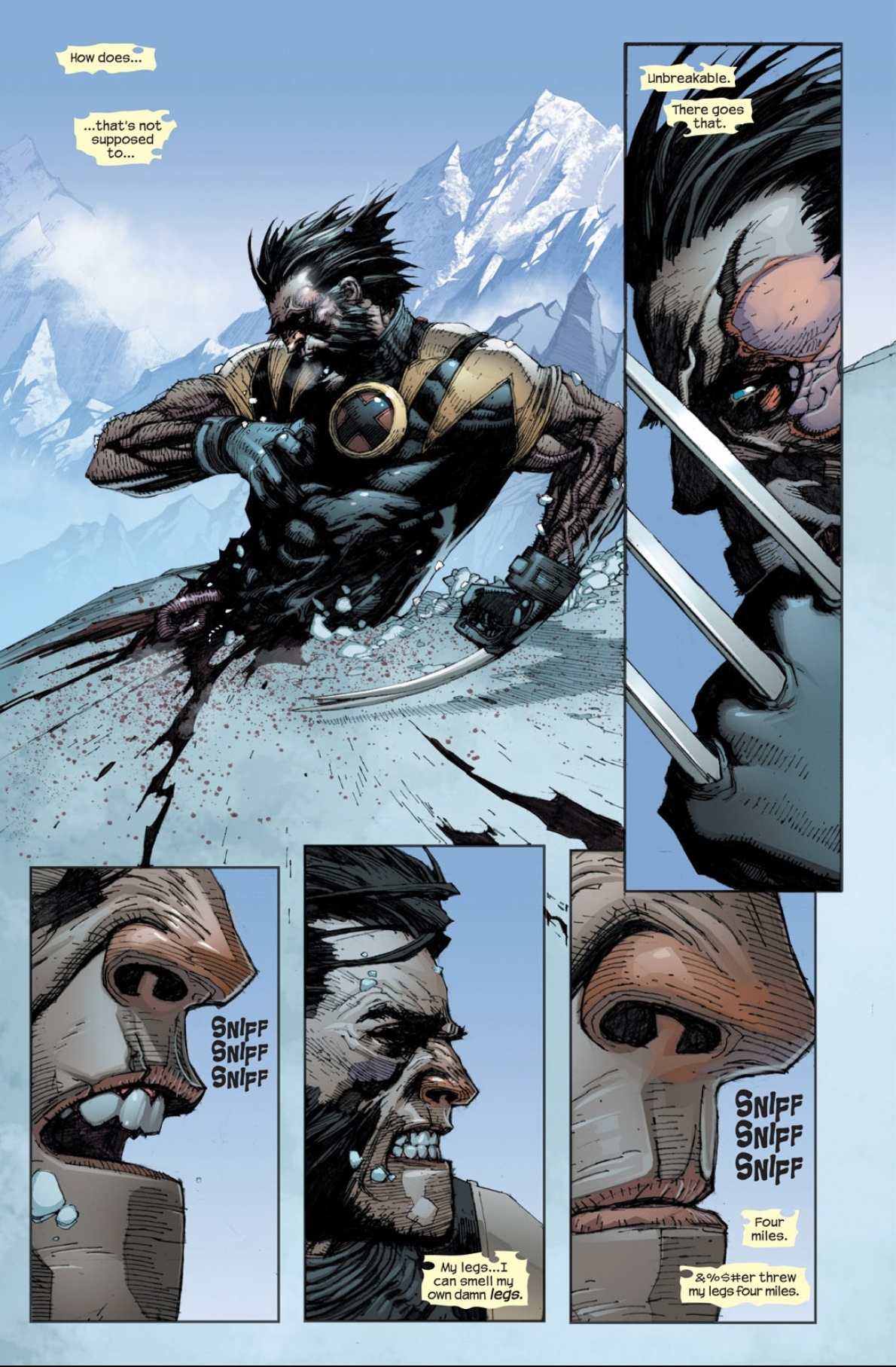 Well then he does a 4 mile climb uphill with his claws, 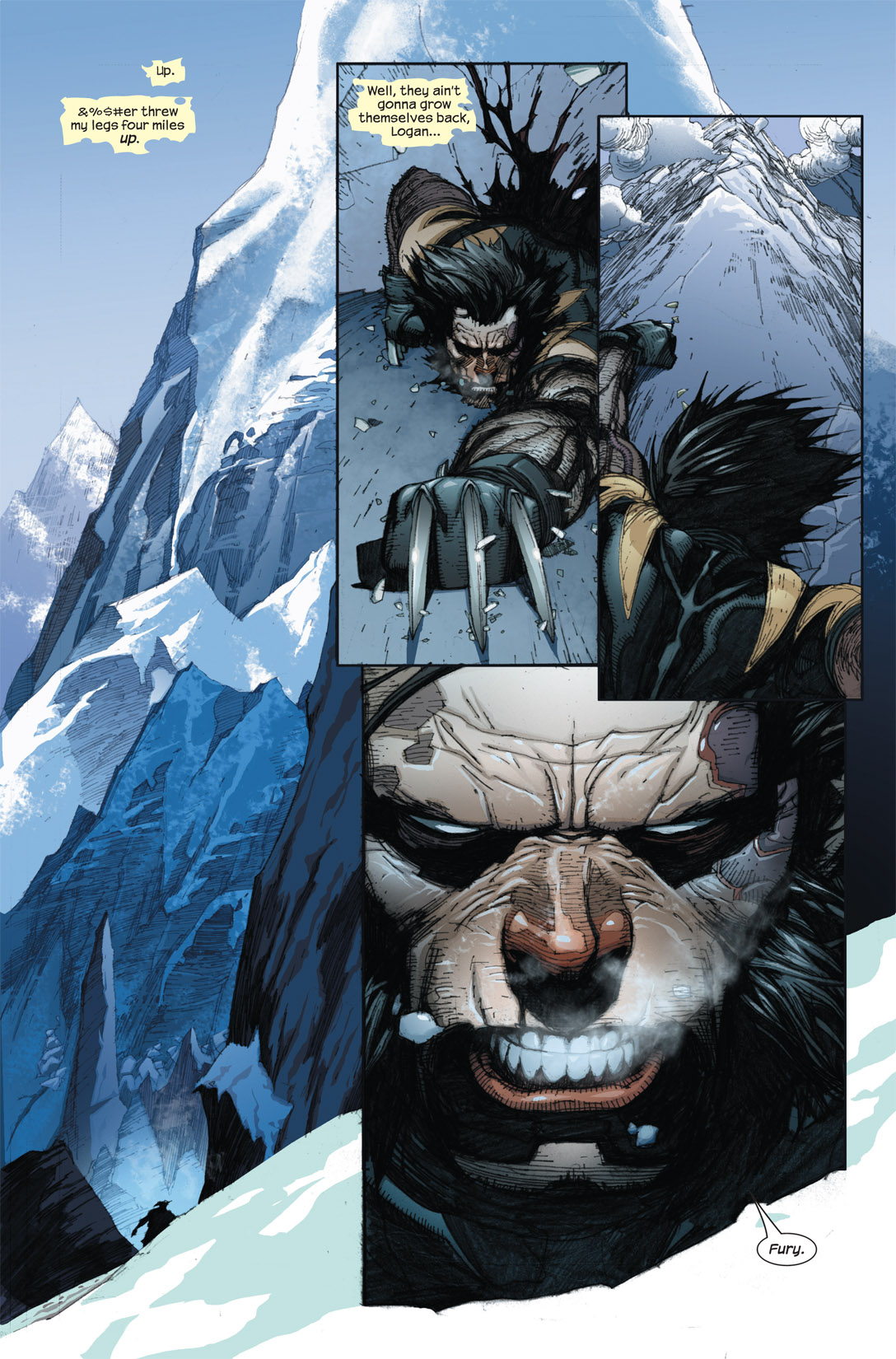 There are other numerous examples in Marvel universe where Hulk has faced off with Wolverine, most of the time wolverine has backed off from fight after being reminded the trauma faced at the hands of Hulk. "Hulk knows you. Hulk tore you in half!"

This answer is based on Marvel Ultimate universe Earth 1610. I do not have knowledge of all of the universes, maybe in some other universe as pointed out by Paul, the scenario may be different (i.e. Hulk gets sliced to size).

special thanks to Wad Cheber & Daft

In Old Man Logan (which is kind of a What-If? story, although it’s probably got its own universe number by now), Wolverine

is eaten by the Hulk, but heals inside his digestive system and cuts his way out, killing the Hulk in the process. It’s... not pleasant.

So if we take that as canon, yup, Wolverine can beat the Hulk.

In one of the What If? (# 31) storylines, an altered version of the famous Wolverine/Hulk battle from The Incredible Hulk # 181 is shown. 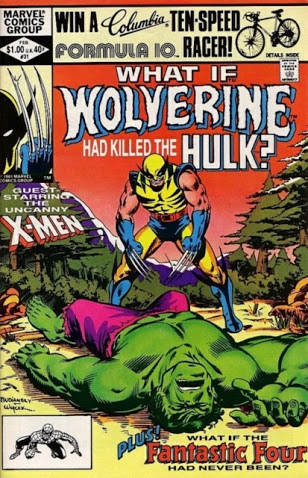 The difference? In this altered fight, Wolverine goes into a berserker rage, slashing the Hulk in a blind, crazed fury until the ol' Jade Giant (Stan Lee's nickname for The Hulk) falls dead in front of him. 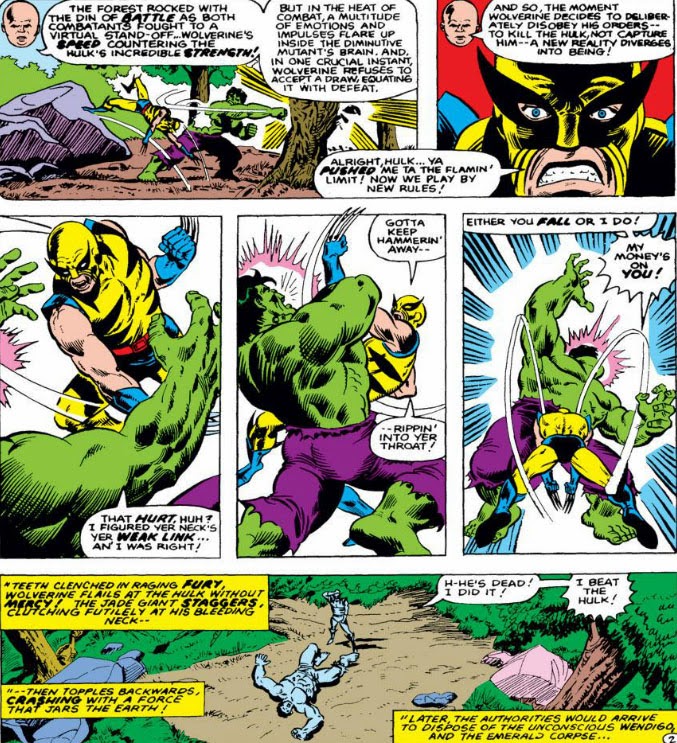 As the people of Earth begin a manhunt for Wolverine, he is approached by Magneto and The Brotherhood of Evil Mutants (Mastermind, Blob, & Lorelei) to aid in fighting mankind. Magneto then sends Wolverine to the X-Mansion, where, surprise, he falls in love with Jean Grey. So needless to say, when Magneto and the Brotherhood attempt to kill Jean and the X-Men, Logan waits until Magneto's back is turned and manages to sneak up on him, impaling him. As Magneto lays dying he uses his powers to force Wolverine to kill himself with his own claws.

So, if you're reading the What If? version of things, yes, Wolverine CAN indeed kill the Hulk (even if it does cause the death of him and Magneto as well).

Beaten, no. Their first encounter, Hulk 181, ended in a stale-mate and in their most recent encounter, Hulk 12 (Volume 3), Hulk defeats both Thing & Wolverine. Hulk also has regenerative healing powers, the madder he gets, the stronger AND more durable he becomes. Wolverine can be killed by drowning, he is not as invincible as many believe. Hulk? He grows gills underwater.

In The Punisher: Confederacy of Dunces (Ennis), Wolverine, Spider-Man, and Daredevil team up to bring Frank to justice. Frank unleashes the Hulk on them (...it's a long story), and the Hulk punches Wolverine so hard he lands in Boston.

In order to get back, Logan has to take a train.

Not the answer you're looking for? Browse other questions tagged marvel wolverine the-incredible-hulk or ask your own question.

37
Can the Incredible Hulk die?
3
In which comic did Hulk rip Wolverine in half?