This probably would have been either in the mid to late 70's or early 80's. It might have been a Saturday morning show, and was live action. The only thing I remember about it was one of the space ships in it looked, to me, a little like a flying superhero. The ship itself was, IIRC, very rough on the surface, almost like it might have been carved out of an asteroid or something.

You're thinking of Jason of Star Command, a low-budget, live-action Saturday morning television program produced between 1978 and 1981. Jason was itself a spin-off of an earlier program named Space Academy, and reused some of the sets, props, and spaceship models.

Jason and the good guys operated from Space Academy, a mobile base built into an asteroid:

The head bad guy was named Dragos. He had a ship called the "Dragonship", which was also built into an asteroid: 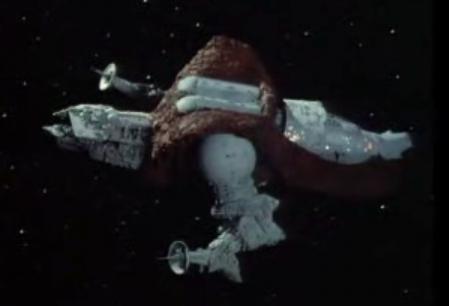 Youtube has the first episode of the series. The Dragonship makes an appearance around the 8:36 mark.

12
90's talking computer children's tv science fiction series
12
Show that had a group of D&D style adventurers?
5
Mid-80s cartoon with 4-5 robots with "special powers" to zap things; had a scene with a kraken chase on an ice world
8
Name of an English-dubbed Japanese show about a man who became a giant robot
6
Children's science fiction book series and tv show
4
90s (or earlier) film or TV show that featured a prison ship whose inmates believed Superman would liberate them
10
British sci fi TV series, mid-late 1960's - early 1970's; scientists try to block a door to the past