Was Joffrey modelled after Caligula?

Often I see this 'fun fact' thrown around:

The character Joffrey Baratheon is modeled after the Roman Emperor Caligula.
-http://www.imdb.com/title/tt0944947/trivia?item=tr2071032.

Now I know that Joffrey is a complete brat - intentionally - and apparently so was the Emperor Caligula, but is there evidence that George R.R. Martin actually intentionally meant to make this connection?

Otherwise, if it's a show thing, then did the creators intentionally mean for this?

Joffrey is a combination of Richard II, Eustace IV, and "five or six people [GRRM] went to school with".

I see a huge amount of Joffrey Baratheon in Richard II. Both of them boy kings, both of them not really learned in the ways of being a king, absolutely drunk on their own majesty.

Richard II became King because his father died before his grandfather died. He's not been around his father, he's never been in military situations, he's a brat.

Richard II is was a really spiteful, vengeful, king and you see that just bubbling in Joffrey. The Purple Wedding, this dramatic death of Joffrey, that we're all sort of cheering when it happens on the screen, historically you can look at some comparisons quite early in the English Middle Ages when Eustace of Boulogne who was heir to the throne under King Stephen and died quite suddenly...

... Some people say it was poison, other people say Eustace died of apoplexy because he was so furious with his father for signing the throne away to someone else.

One day at a feast Eustace was eating lamprey pie and he choked to death...

There are these incidents in history where people do die mysteriously, but Eustace is the only one I know who died choking at a feast, so that was probably the inspiration for the mode of Joffrey's death.

Interviewer: My theory, is he [Joffrey], somebody you went to school with?

GRRM: Ya know, there might be something to that... I think he is about five or six people I went to school with.

Interviewer: Who did you look to for Joffery, out of interest...

GRRM: Eh, Joffrey, I knew a lot of assholes.

GRRM: You know you really don't want to give a thirteen year-old kid absolute power over life and death over everyone around them. That's a general rule, and in terms of looking inward, I mean even a character like Joffrey, there's some of me in it. God, there where other kids that I hated and if I had the power to kill them, um, I probably would have done it. I could easily see making a couple of the school bullies back in Bayonne, New Jersey fight to the death.

I can't speak to GRRM's intention, but there are some significant differences between Joffrey and the historical Caligula:

Also, there is some debate over whether Caligula actually committed the insane sexual and violent acts attributed to him. Many of these accounts were written by his enemies after his death. Caligula is known in popular culture from the books and TV series I, Claudius and film Caligula, which take many of the more lurid stories at face value.

The superficial similarities are pretty clear:

Both were assassinated after a relatively short reign -- although Caligula was stabbed whereas Joffrey was poisoned.

GRRM is most likely familiar with the history and dramatic depictions of Caligula, and may have used them for inspiration, but it's clear Joffrey is not very closely based on Caligula.

It's worth noting that child rulers were very common in medieval times, and not all of them were particularly pleasant or well-balanced people. The motif of the insane child ruler occurs elsewhere in ASOIAF, most obviously with Robin Arryn.

I don't think this has ever been answered by George himself and the only reference I've found of him talking about Caligula is the following about Littlefinger. Note that he doesn't bring up Joffrey as a more suitable comparison but that doesn't really mean anything.

[Is Littlefinger based on Caligula?]
Definitely not. Gaius Caligula was nuts, and Petyr Baelish is as sane as can be. Caligula was flamoyant and drew attention to himself. Littlefinger is more subtle.
So Spake Martin, LITTLEFINGER, CALIGULA, AND TYRION

I think it's worth noting though that even if Joffrey is based on Caligula he isn't a direct representative as George has said himself.

I don't like to just take a character from history, whoever it is, and just change his name, kind of file off the serial number and present him as my own character. What I much prefer to do is perhaps take 2 or 3 characters from history and mix them up together or do juxtapositions that are original; I mean I don't want…I love historical fiction as a reader, but one of the problems with historical fiction, if you read a lot of history, you're always going to know how it's comes out. If you read a novel that’s actually set during the Wars of the Roses, you know what’s going to happen to those two little boys in the tower; you know who's going to win the Battle of Bosworth Fields. You know the ultimate fate of the mad King Henry VI. So I don't like that, I don’t want someone to just look at my book and know what happens because they're recognizing historical analogues, I like the stories to be unpredictable.
So Spake Martin, SECOND LIFE APPEARANCE

Lastly, I think it's worth pointing out that the main reason people think Joffery was based on Caligula is the similarity between the actors appearance and Caligula's. George R. R. Martin couldn't have known this when writing the books so that also goes against the theory. 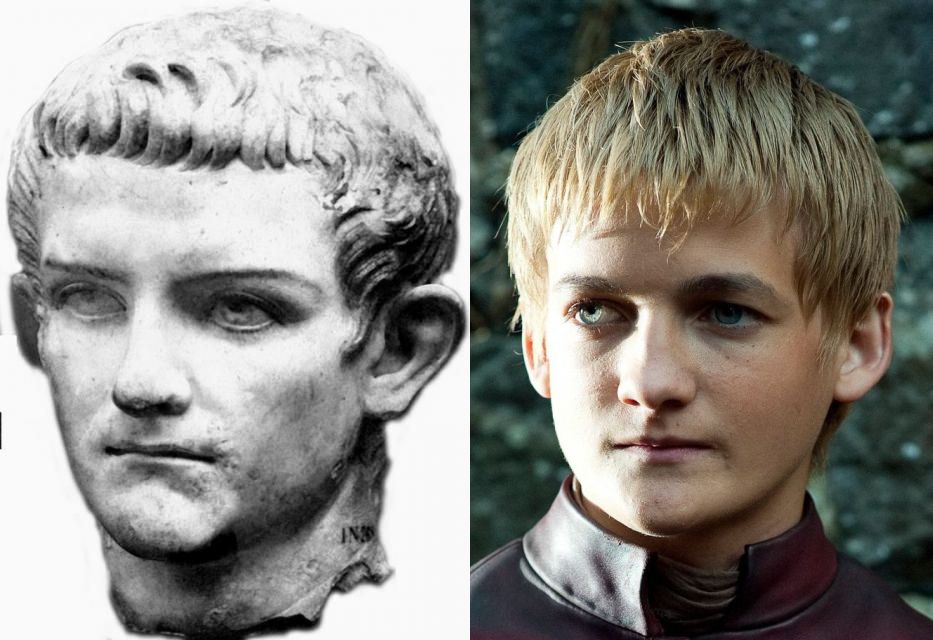 I could joke that Joffrey is not based on Caligula but on The Caligula, the TV Tropes trope of an insane, incompetent and cruel ruler, named after Caligula and his bad reputation.

I am also working on articles about historic kids whose reputations have been slandered in history - they are the same group as the allegedly evil kids in the previous articles, since I strongly suspect that most of their evil deeds were lies made up by their enemies. Thus the list of crimes actually committed by child and teenage monarchs in history should be much shorter than the lists of crimes they committed according to various websites and history books.

However, the crimes of child and teenage criminals in recent times show that it is certainly possible for children and teenagers to be as evil as those allegedly evil kids in history.

While I'm sure the analogies could very well apply to other historical empires, and I assume my studies in Latin skew my objectivity, I see a lot of similarities between Westeros and the Roman empire in general.

I have not read the books (yet), so I can only speak to the TV show's similarities.

While your analogy of Caligula and Joffrey is somewhat correct, it would seems most of the similarity boils down to "young narcissist with a penchant for sadism". This can easily be attributed to how their enemies spoke of them (though we have seen Joffrey be exactly that), or simply their youth leading to naive leadership decisions which in turn led to dissent among the people.
Selfishness is a trait many teens experience some way or another, whether they're ruler of an empire or not. If anything, them wielding supreme power leads them to being more selfish as no one has the power to correct them on it.

I would add, though, that Tommen currently reminds me of Augustulus, the last Roman emperor. He was very young (roughly 12), and did not actually wield his monarchical power because he was too weak for it.
Augustulus was easily deposed by the invading armies, and I would expect a similar fate for Tommen should there be another invasion of King's Landing (just an educated guess, since I haven't read the books).

The relationship between Joffrey and his uncle, Tyrion, seems to mirror Caligula and his learned uncle, Claudius. Caligula mocked and derided Claudius. However, after Caligula had been assassinated, Claudius became arguably Rome's wisest emperor.

Also, Caligula was known to regularly say 'I can do anything I please to anybody', which was also Joffrey's stated outlook.

The Caesar line produced blondes. According to Suetonius Caligula had a golden beard. He threw citizens into the gladiator arenas to be eaten alive by lions. Nero had blonde hair. He burned Christians alive for "hatred of humanity" according to Tacitus. Both were accused of incest and so was Nero's father. Nero was the 5th Emperor of Rome who "fiddled while Rome burned." It is believed his mother poisoned the Emperor to secure for him the seat of power. Who does that sound like to you?

In this article I prove not only is Joffrey based off of Nero Caesar, but Nero Caesar is the identity of The Beast from the Bible's Book of Revelations.

12
Since Joffrey was a minor, why the urgency?
5
What is Renly's basis for removing Joffrey?
10
Does Joffrey ever show incestuous tendencies?
4
Where does Joffrey Baratheon end up?
8
Does Joffrey have cousins?
5
Why did Stannis keep the title of Prince of Dragonstone after Joffrey was born?
6
According to the books, who poisoned Joffrey?