Has Batman himself ever taken seriously the idea that he indirectly causes Gotham to have more supervillains?

So there's a classic argument that Batman's style of vigilantism actually makes Gotham less safe and more crime-ridden, because it indirectly encourages the city's scum to become "super-criminals" obsessed with defeating him, like the Joker and the Riddler. Variations of this argument have been raised by some in-universe characters, often villains trying to excuse their actions, but also by at least one of the good guys (Gordon at the end of Batman Begins, 2005):

Batman: We will. We can bring Gotham back.

Jim Gordon: And, you're wearing a mask. Jumping off rooftops. Now, take this guy. [pulling out a file]

Jim Gordon: Armed robbery, double homicide, has a taste for the theatrical, like you. Leaves a calling card. [shows Batman a plastic evidence bag containing a Joker card]

In this scene Batman appears to simply ignore the implication. What I'd like to know is: Has Batman ever taken this idea seriously enough to consider changing his methodology? (in any medium)

For instance, has he ever asked a psychiatrist if there are ways he might prevent these sorts of psychos from being inspired by him? Or has he ever tried taking an extended break from crime-fighting to see if the super-criminals get bored without him around?

Well yes, he tends to blame himself for that and for the death of his parents (and probably a lot of other things) but then, in the end, someone else (Alfred or some other character) tries to straighten him out, as there was nothing young Bruce could do to stop his parents murder OR what crazy people choose to do in Gotham City.

For example, there was an episode of BTAS where he is put on trial called, ah, "The Trial":

D.A. Janet Van Dorn: I used to believe Batman was responsible for you people, but now I see nearly everyone here would have ended up exactly the same, Batman or not. Oh, the gimmicks might be different, but you'd all be out there in some form or another that brings misery to Gotham. The truth is, you created him.

And in "Day of the Samurai" from BTAS, Bruce thinks he's no better than the villain he defeated and his sensei tries to set him straight:

Sensei Yoru: If you see Batman, tell him I have great respect for him.

Bruce Wayne: Why? He's as much a ninja as Kyodai was.

Sensei Yoru: Not so. Batman offered to help his adversary, and a lesser man would have used the secrets of the Onemuri touch against his opponent. Batman is the essence of samurai, Wayne-san. You would do well to remember that.

So you see, he's harder on himself than anyone else. He takes the prize on brooding.

And I didn't state the obvious: Bruce feels responsible for the creation of the Joker as he had a direct hand in that event. Batman fights a Red Hood impostor, Red Hood impostor falls into vat of chemicals, and out pops the Joker.

There is a similar exchange between Batman and Deathstroke in Batman #91 (2020). Technically what Batman acknowledges is that it's his fault his ways scare Gotham citizens, but they're needed to fight the villains coming over and over again, and Batman isn't an idiot, he knows some of these "costumed madmen" come back for him.

He also talks about how he's trying to "change that", but the method he tries does not seem very efficient, as it expects the bad guys to outright stand down and let him help civilians.

BATMAN: There are around nine million people living in Gotham. Innocent people who have spent the last few years in a kind of constant rolling hell. It's a city where faith in government went up when Bane took control. They're scared like they've never been before, and all I am trying to do is give them some kind of peace...

DEATHSTROKE: Do you think I care?!

DEATHSTROKE: Why do you think they're afraid? Whose fault is that?

BATMAN: It's mine. You think I don't know it's mine?! Of course I know! I've spent my career using my wealth and power to fight costumed madmen, and they keep coming back, over and over! I keep needing to make bigger and more frightening weapons just to keep you people down! You know who I am. You know how it started... In an alley with a mugger and a revolver... And I changed to stop that... and the muggers changed too... You always come back with a bigger gun.

DEATHSTROKE: You escalated first. Don't pretend that your hand was forced. 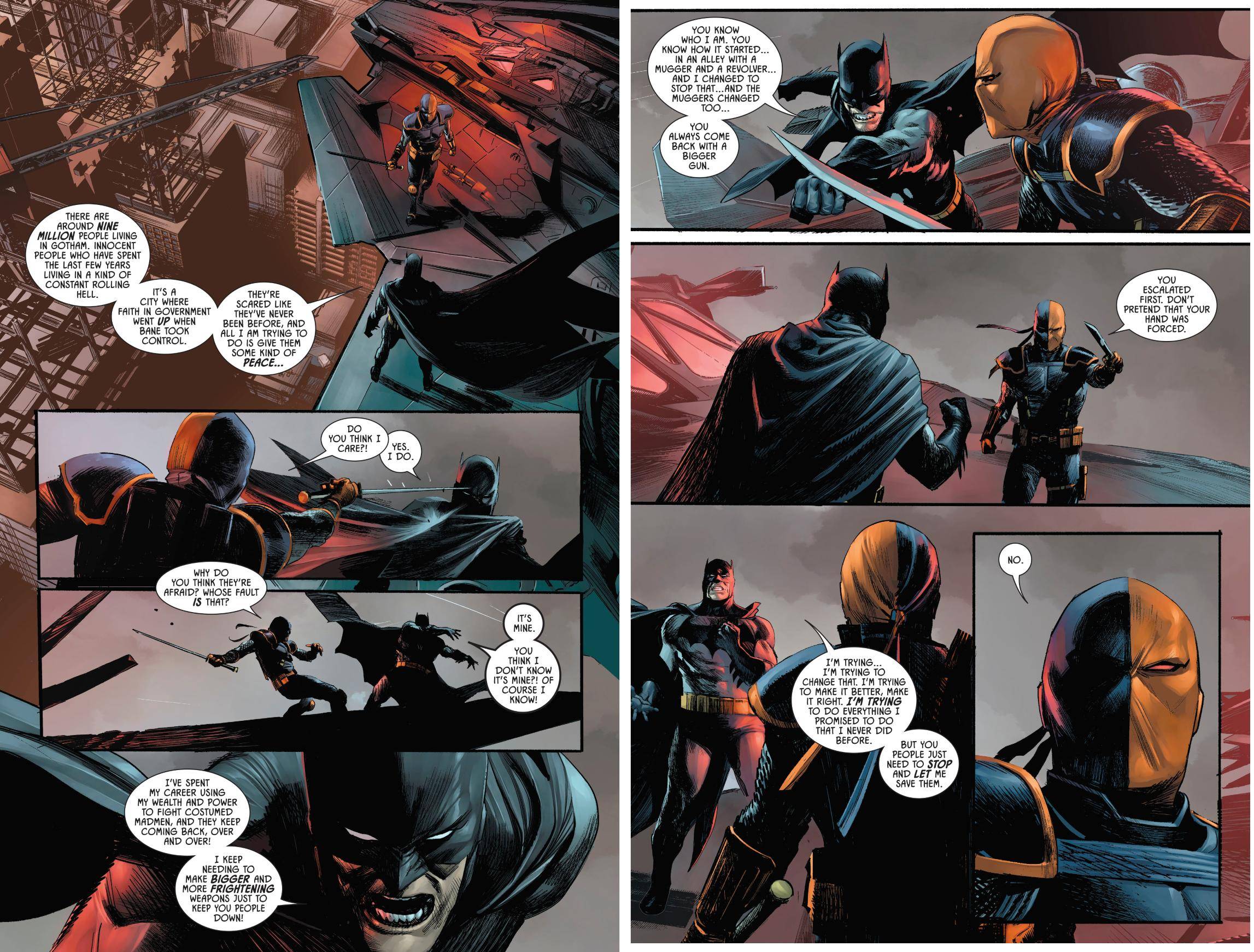 It may be true that the Batman's existence causes there to be more supervillains, yet if you go by the comics, costumed villains apparently existed in Gotham way before Batman. So Gotham, apparently, like all the cities in DC and Marvel comics, are "cursed" to have costumed villains and heroes fighting.

I don't have exact references, but I do remember in one of the animated Batman series that this question comes up. That Batman even considers quitting due to the rise in supervillains, because he feels responsible for the increase of their numbers.

Yes, in the same series (The Batman) you quoted actually. In The Batman TV series, there was an episode where the villains of Arkham put Batman on trial on the grounds that he caused the villains to exist.

Then they put an attorney that was against Batman in charge of his defense. She ended up concluding that Batman does not, in fact, cause the supervillains, but that the supervillains caused Batman to exist.

To some degree, this was the plotline of The Joker War, where The Joker turns Batman's technology against him, seizing the Batsuit and getting the support of the populace, Wayne Industries, and the Gotham City Police who have been armed with technologies developed by Bruce to support his fight on crime. This is escalation in a more real-world setting, looking at the scenario of Batman funneling his money into the support of real-world law and order, and what might happen if the police become militarized and then go after the wrong targets. In the end, Batman states that Joker was right, that he's been escalating the conflict, while he himself is aloof from the masses as a rich man who buys high-tech equipment to beat people up, thereby making the problem worse because he doesn't understand the problem. and he intentionally joins the common people.

Honestly, I don't think the storyline will last for long, but it is a definite case of Batman recognizing that his escalation has led to Gotham's problems.

16
Has anyone ever ambushed Batman at the bat signal?
18
Has there ever been a female character using the Batman name?
7
What animated Batman movie had an old Bruce and young female Robin?
11
Has Batman Ever Sacrificed himself for Superman?
8
Has the death sentence ever been introduced in Gotham?
38
Is it true that Batman's supervillains exist as a reaction to Batman himself?
49
Has Batman ever said he hates the Joker?
11
Has Batman ever been the dictator?