Who knows about Loki's parentage?

Loki is the second son of Odin, All-Father of the Asgardians. However,

Loki is not an actual Asgardian, nor the natural born child of Odin and his wife Frigga. It is ultimately revealed that he is actually a Frost Giant of Jötunheim, the mortal enemies of Asgard.

Aside from the Asgardian royal family (Odin, Frigga, Thor and Loki) who else is aware of the unusual circumstances of his parentage?

Note: I am looking for both a canon comics answer, as well as an MCU answer (if one actually does exist... which I doubt... yet).

As far as we know, the only people who know that Loki is not the natural-born son of Odin are Odin, Frigga, and Thor. Even Thor's close friends, who end up effectively rebelling against Loki in Thor, do so because they disagree with his actions. At no point do they seem to challenge the fact that he is the rightful heir to the throne, after Odin and Thor.

It's possible that Heimdall also knows; he certainly knows that Loki aided the Jotunn in getting into Asgard past him. However, Loki chose to kill the Jotun King to save Odin, which would likely go a long way to throwing suspicion off of him.

After that, we never really see Loki do anything Frost-Gianty anymore; he becomes fascinated with the Tesseract, and later with fighting off the Svartalf.

Unfortunately, we don't see very much of the noble court of Asgard, let along the rank-and-file army or civilians, so it's hard to know if rumors of his parentage have been floating around, but certainly, nothing definitive.

Everyone in Asgard knows.

It's common knowledge by the time Thor: Ragnarok takes place.

Actor Odin: Loki, my boy...‘Twas many moons ago I found you on a frost-bitten battlefield. On that day, I did not yet see in you Asgard’s savior. No. You were merely a little blue baby icicle... that melted this old fool’s heart.

I can't speak to the Marvel Cinematic Universe. I'll leave that to others.

In Marvel Comics, however, Loki's parentage was never any secret. The following page is from Journey into Mystery #112 (1965), where the "Tales of Asgard" feature relates Loki's origins. As the last panel shows us, Odin makes a loud and official proclamation of the adoption. So be it known across the Realm Eternal! 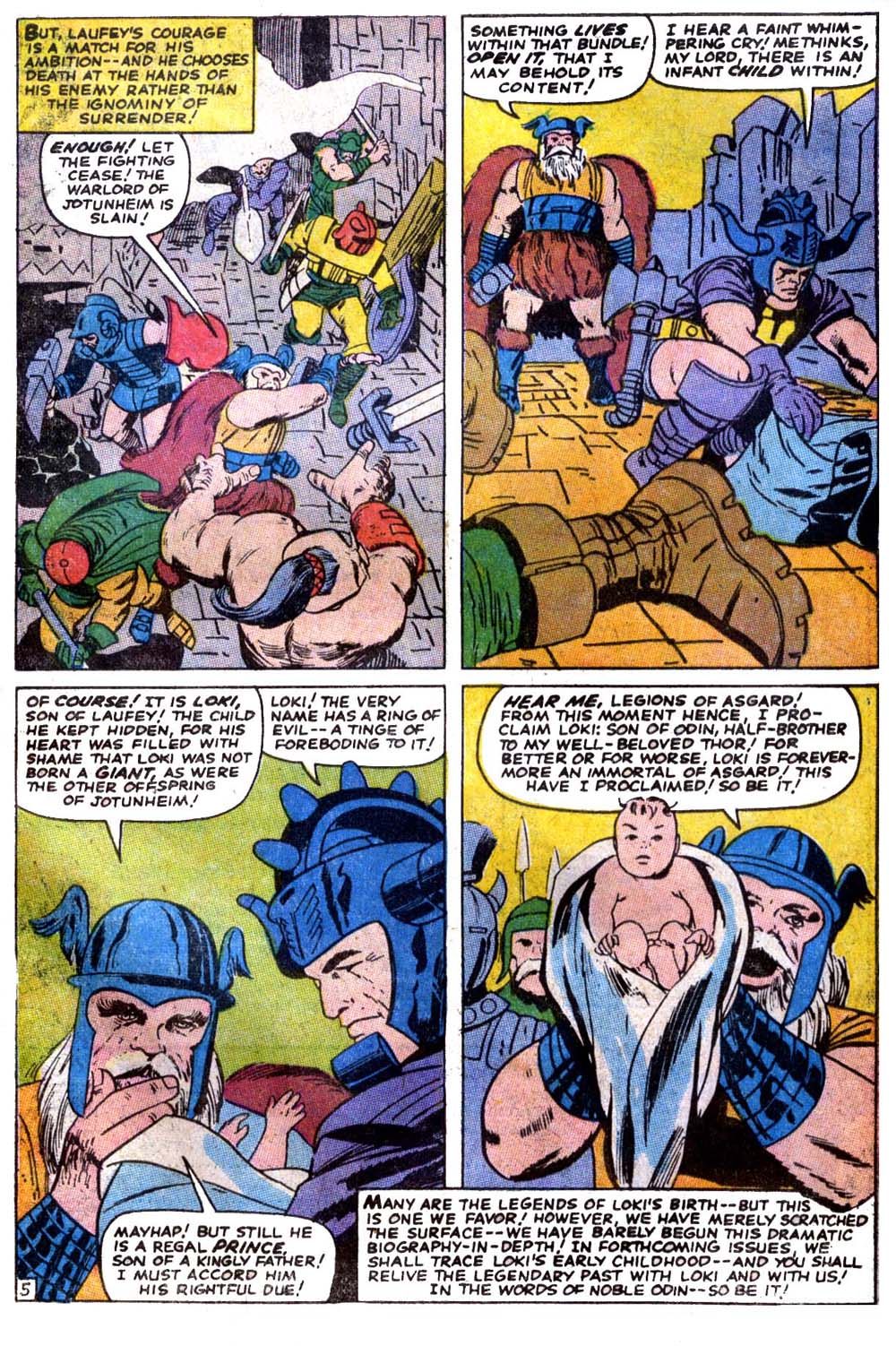 (this page also offers an explanation to a few comments about Loki not being "giant-sized".)

In the MCU it's probably Odin, Frigga and Heimdall (before he saw Loki in his Jotunn form or after he saw it). Later it's Thor and if we consider Ragnarok, all Asgardians (but I do not like it personally). In the comics all knew it from the start because Odin did not hide Loki's origin. Same thing with mythological Loki.

Not the answer you're looking for? Browse other questions tagged marvel marvel-cinematic-universe thor-marvel asgardians or ask your own question.

3
Why didn't Thor grieve for his mother, Frigga
2
Does the attempted invasion of Midgard by Frost Giants figure into any Nordic myth?
24
In what sense are Asgardians "immortal" in the MCU?
32
In the Marvel universe, do we know how the Norse people discovered Thor, Odin, Asgard, etc
29
Is Thor more than an Asgardian?
4
Why didn't Doctor Strange check this before he created a portal to Norway?
3
What is the in universe relationship between the Asgardians and Nordic cultures?
9
Whereabouts of Odin's spear, Gungnir, after the events of Thor: Ragnarok
19
Why doesn't Loki look like a Frost Giant in the TVA?
10
How do physically different Lokis even exist?