The story is set in a vaguely medieval world in which a young woman has been cursed by the evil witch who has enslaved her and caused her to lose her memory. With the aid of her talking animal friends who have also been cursed (toad has a huge stone under his tongue meaning he can't feed and a crow with a gem embedded in its wing and there's a little grey kitten too who never grows up) she sets out on a journey to break the curse for herself and her friends. Along the way she meets an injured unicorn and a horny-but-moral soldier rendered impotent by a curse after refusing the disguised witch's sexual advances.

After adventures there's a 'happy ever after' for all of the heroes and the witch meets a sticky end.

In the UK the book had a deep red cover with an illustration. I read it in either the 1990's or the early 2000's. Cracking book, definitely for adults given some of the situations, language and humour.

This is Mary Brown's "The Unlikely Ones".

The plot and characters are exactly as you describe:

In a dank cottage, 5 unlikely heroes are enslaved by an evil witch through very painful pebbles embedded in their flesh. They are Thing, a twisted girl deemed so hideous that she always wears a mask, Corby, the black crow, Puddy, the toad, Moglet, the timid kitten, and Pisky, the golden fish. They have no memory of their past and have learned over time to communicate amongst themselves.

When the villagers band together to burn the witch, our heroes escape and set out to solve the mystery of how to remove the pebbles that are causing them such agony. Along the way they meet two others harmed by the witch. The first is a hornless unicorn, whose whose horn was destroyed and companion was slain by the witch. The second is a knight cursed by the witch because he spurned her. His curse is to have rusty armor, a blunt sword, and all desire unfulfilled until he weds the ugliest creature in the land.

Note also the the 1990 UK edition did indeed have a red cover with an illustration: 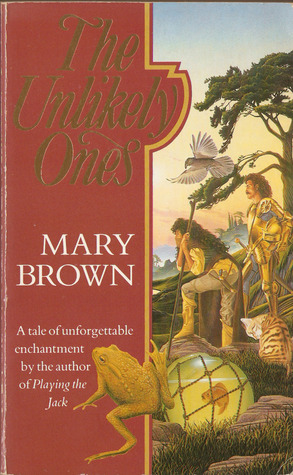 5
A knight with rusty armour and a girl who talks to animals
4
Fantasy book: girl and her familiar frog, cat and fish escape their witch jailor and search for who they are

6
Book: modern post apocalyptic magical dystopia with Unicorns and Gryphons
12
Looking for fantasy fiction novel series with a male witch and dragon
5
Book about a girl with magic and a boy a with curse
3
Book (first in a series?) with a teenage witch attending a school of magic mainly with nonhumans
1
Webcomic with a woman seeking out a stag-headed hedge witch to break a curse
9
Fantasy novel with bright yellow cover, male witch protagonist
4
Science Fiction / Fantasy book involving a young woman hired to read Tarot cards for a local lord, ends with her killing his brother for him