How did the Scarlet Witch and Quicksilver come by their powers?

In The Avengers: Age of Ultron we find out a lot more about the Scarlet Witch and her twin brother, Quicksilver. I know that they volunteered for some kind of procedure or process which ultimately allowed them to use their powers. What I don't know is what happened to allow them to have the powers in the first place? Was it they were born with the powers, or were they given (or enhanced)? What is their back story?

(NOTE: We do get some of the Scarlet Witch's back story from this question, but I'm looking for something more complete).

This question is a bit tricky, because there are two parts to the answer: how they got their powers, and why they specifically got powers that way.

What we know definitively is that said abilities manifested as a result of HYDRA experiments, and that they had no such abilities prior to HYDRA intervention.

Starting with the post-credits scene from Captain America: The Winter Soldier, plus the opening act of Age of Ultron, we're told that HYDRA (specifically, Baron Strucker and Dr. List) have been experimenting on humans by using the power from Loki's scepter. During Age of Ultron, we eventually learn that this power is, in fact,

one of the Infinity Stones -- the Mind Stone.

The twins are not the only people who were experimented on by HYDRA, they were merely the only two who survived. At the end of The Winter Soldier we see them in cells, with Wanda making things levitate and Peitro zipping around the cell at high speed. Based on Dr. List's comments, HYDRA's goal was to try to create an army of enhanced soldiers to take on the Avengers. Unfortunately, all of the others except the Maximoff twins died in the process. Ultron even calls this out, when he says something like "I used to wonder why you two were the only ones to survive Strucker's experiments."

However, on the question of the ultimate origin of those powers, that's a bit less clear. There is some evidence -- inconclusive but compelling -- that the twins had latent powers, and that may be why they survived the experiments. The comic prelude to Age of Ultron includes some dialog between the twins and List, describing the experiments: 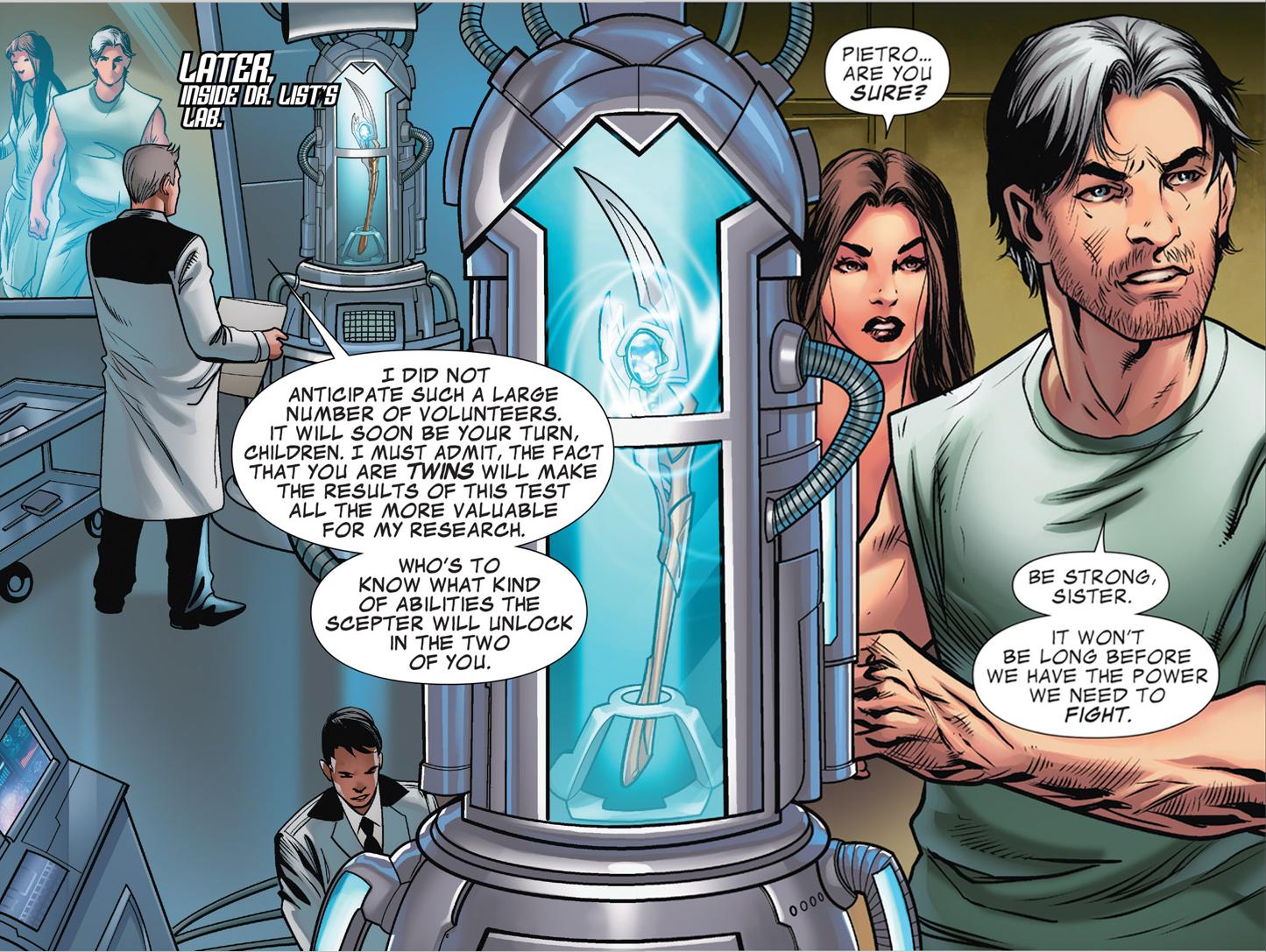 Note that he uses the term "unlock" to describe the process of enhancing the twins with powers. Whether he was literally talking about bringing out latent abilities (e.g. they are something like Inhumans), or was just being metaphorical (in the sense of "unlocking" some new age of science) isn't clear. We know from Agents of SHIELD that people within HYDRA (e.g. Dr. Whitehall) were aware of the Inhumans and the abilities they possessed, and were trying to replicate them.

Whether the twins are Inhumans, are some other form of naturally-enhanced metahuman, or are normal humans who's powers were created from scratch by the scepter is still a somewhat open question.

in agents of shield list says that none of the alien enhanced DNA subjects survived the test except for the twins.it seems they are Inhumans.as far as magneto being their father that has been dealt with a long time ago in the comic books he is not their father.not any more....

Before continuing on the subject, I'll say that thankfully Whedon disregards Bendis and Byrne's rubbish portrayals of SW and makes her an entirely individual character.

Think about "unlocking" and "latent" for a moment, and what that means. The powers were "unlocked" by the mind stone/sceptre, or perhaps they were "triggered", an alert activating the dormant powers.

Dormant powers perhaps bestowed by a being who foresaw the threat of Thanos, perhaps?

The twins are Eric Lensherr, aka Magneto, a mutant with the ability to make magnetic fields and control all metal, the twins are his kids so they both are mutants

18
Is Quicksilver in the X-Men movies the same as in Avengers: Age of Ultron?
11
Have Scarlet Witch's MCU powers been seen in the comics?

11
Other Sibling Avengers?
11
Have Scarlet Witch's MCU powers been seen in the comics?
6
Fewest LEGO sets to get all the new Avengers?
3
Couldn't Marvel use any of the Avengers characters?
9
Why was Quicksilver vulnerable to Scarlet Witch's curse in the Decimation comics?
8
Is there something in the Marvel universe that could cut vibranium in half?
26
What did the Scarlet Witch show the Hulk/Bruce Banner?
1
Other than a “Lullaby” how does Hulk turn back into Bruce Banner?
5
How can Scarlet Witch hold off Thanos?