How many people did Voldemort kill?

Albus Dumbledore stated in HP6 about Inferi and Voldemort:

They are corpses, dead bodies that have been bewitched to do a Dark wizard's bidding. Inferi have not been seen for a long time, however, not since Voldemort was last powerful ...He killed enough people to make an army of them, of course.

Is there a way to estimate from canon just how many people (muggles, wizards, or both) Voldemort personally killed?

What is NOT included: ordered a person with a free will (non-Imperioused) to kill.

Coming in three years later, in the advent of Pottermore ...

By my count, Voldemort killed a minimum of eighteen people and upwards of hundreds more.

I counted eighteen confirmed deaths from the books (please feel free to check my math).

As well, it is strongly implied that Voldemort himself killed Amelia Bones, Head of the Department for Magical Law Enforcement (Half-Blood Prince, Ch. 1), and Order of the Phoenix member Emmaline Vance (Half-Blood Prince, Ch. 1). Bathilda Bagshot is also a likely victim (Deathly Hallows, Ch. 17), but it is not explicitly stated that Voldemort killed her. Also, Cedric Diggory was killed by Wormtail at Voldemort's command; while Voldemort didn't kill Cedric himself, he was complicit in Cedric's murder.

The Inferi whom Harry and Dumbledore encounter in the depths of the lake in Harry Potter and the Half-Blood Prince were, when alive, mostly vagrant, homeless Muggles whom Voldemort had murdered for the purpose during his first rise to power, although some were the earthly remains of wizards or witches who 'disappeared' without explanation.

Pottermore - Inferius - Half-Blood Prince Note: Pottermore requires users to have a (free) account. If you don't have or want a Pottermore account, I guess I would suggest Googling "What is an Inferius?" to be redirected right back to Stack Excange confirm.

Estimating the number of Inferi:

So J.K. Rowling's comment about the Inferi states Voldemort killed vagrant and/or homeless Muggles for the purpose of turning their bodies into Inferi. I checked Half-Blood Prince to see if Harry estimated how many Inferi came out of the lake in the chapter The Cave, when he touches the water as he tried to get a drink for Dumbledore. There is no estimate, but it was clearly a good number. I read through the sections on the Inferi and Half-Blood Prince, looking for a number, in Bob McCabe's book Page to Screen: The Complete Film Making Journey. Visual Effects Supervisor Tim Alexander merely says, "The underwater world was difficult because of [the sheer number of Inferi] and the interactive light from the fire." (Page 192)

Judging from the concept art, Voldemort had to have killed at least hundreds of Muggles and wizards to create the number of Inferi that guarded his Horcrux in the sea cave. J.K. Rowling also describes the lake in the cave as "vast" on Pottermore; a vast and, presumably, deep lake could conceivably hold thousands of Inferi, all killed, then bewitched, by Voldemort.

Concept art by Rob Bliss from the Bob McCabe book (Page 193). The photo quality isn't the greatest, as I took it with my phone in low light, but it should show the general idea: 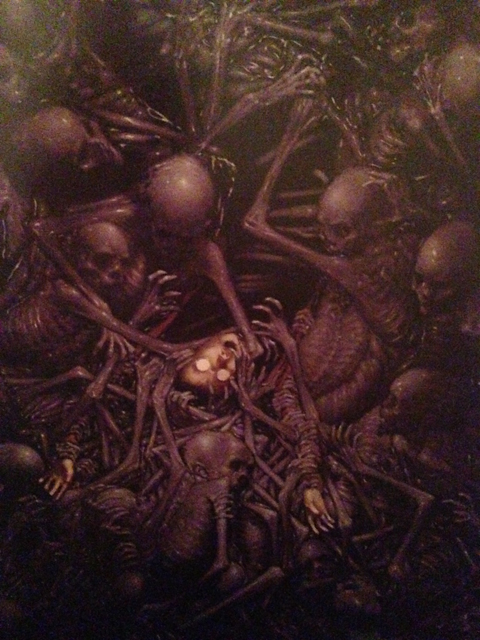 03.06.15 - While researching a different question I came across the following bit where Dumbledore explains what Inferi are to Harry:

‘They are corpses,’ said Dumbledore calmly. ‘Dead bodies that have been bewitched to do a Dark wizard’s bidding. Inferi have not been seen for a long time, however, not since Voldemort was last powerful ... he killed enough people to make an army of them, of course. This is the place, Harry, just here ...’

An army is not a small amount of people (or Inferi, as it were.). This reiterates Voldemort's murderous exploits were extensive and extremely far-reaching¹.

¹Oops, I forgot DVK included the above quote in his original post. I'm going to leave it in my answer because it really demonstrates how violent Voldemort was, and how little he valued life, which, I think, bolsters my answer. Anyone is free to edit it out, though.

I don't think we can ever know based off the currently published material. Obviously we have a lower limit from the accounts in the books (at least 16 by my count, potentially including others depending on how you count "personally", i.e. Snape), but unless JK Rowling writes a canon history of the original Wizarding War we can only assume he may have killed tens, hundreds or even thousands personally during them. Given his habit of killing callously as seen throughout the books, I would be surprised if his personal total was not significantly higher.

In addition to the excellent list provided by Slytherincess, there is another scene where we explicitly see Voldemort killing people. In Deathly Hallows when he finds out that Hufflepuff's cup was stolen from Gringotts he kills everyone around him who didn't run out in time:

The Elder Wand slashed through the air and green light erupted through the room, the kneeling goblin rolled over, dead, the watching wizards scattered before him, terrified: Bellatrix and Lucius Malfoy threw others behind them in their race for the door, and again and again his wand fell, and those who were left were slain, all of them, for bringing him this news, for hearing about the golden cup —

Here we have one goblin and at least a handful of wizards killed directly by Voldemort.

Not the answer you're looking for? Browse other questions tagged harry-potter voldemort kill-count or ask your own question.

24
Why did Voldemort have only 7 Horcruxes?
16
How many people died during Grindelwald's reign?
-2
Who is responsible for more deaths: Voldemort or Grindelwald?