Can't you just bite off a face hugger?

This seems like a serious plot hole to me. The face hugger in the Alien franchise is almost completely soft, short of its crab like legs. 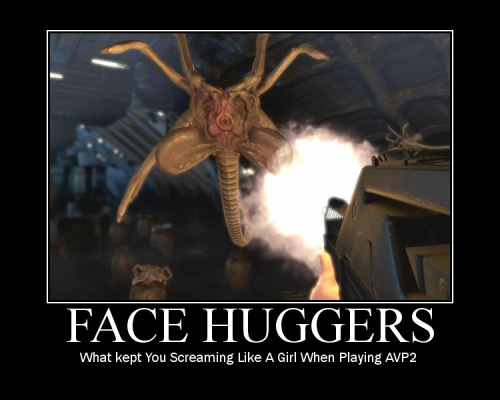 It seems like a serious evolutionary disadvantage if your means of procreation were to stick your most sensitive appendage into the most dangerous entrance of host. It would be like:

To me, every single enouncter would proceed as follows:

There's no reason why the first thing that the facehugger does has to be to extend the ovipositor. A better strategy would be to clamp onto the host with its legs, and then wrap the tail around the neck to constrict the arteries leading to the brain. Eventually the host falls unconscious, then the ovipositor does its thing, injecting an egg plus some toxin that makes the host remain immobile long enough for the larva to settle in and start growing.

While the other answer is quite well thought out, there's another possibility I've been thinking about for years.

I also figured that we don't know just what kind of tissue the ovipositor is composed of. It's quite possible the tissue is hardened or it extends a harden sheath around it when it penetrates the mouth.

Surely the facehugger would have the same kind of blood as the aliens themselves? Biting it off wouldn't do you any good if your face subsequently dissolved.

One could guess they have some mechanism to sedate their prey before extending the ovipositor.

I recall of the scene when the facehugger leaves the egg and grabs the face in one of the movies, that there is a little struggle and then the victim lie down in a coma, but I couldn't find a video of that scene.

On the other hand I could find this scene to support my theory:

You can see that their victims lie in a subconcious state after the facehugger grabs their face. Observe how he constrains the neck only when they trie to remove it from the host, as a "warning" more than a mechanism to keep the victim in a coma.

This was my first answer in this site, so I'm open to recomendations on how to improve it. Also english is not my first language, so I'm also open to suggestions if I made any mistake.

While I think Kyle Jones' answer is not only reasonable but likely, Daniel Roseman is correct. The facehuggers do have acidic blood. Recall the scene in Alien where they are going to try and cut the creature off of Kane. The first cut spills blood onto the floor, which eats through a couple of decks of the Nostromo.

Note that this fact supports Kyle's answer. If the creatures were having their depositors bitten off frequently, killing the host in the process, the species would be struggling to grow. As such, it seems likely that it would render a victim unconscious and then deposit the egg.

You'd have a very hard time biting down with something being pushed down your throat, since that would make your gag reflex go into overdrive; a huge part of the gag reflex is opening the mouth wide, so if it shoves it down there while you're still awake you're going to be trying to vomit rather than trying to bite down IMO

Not the answer you're looking for? Browse other questions tagged alien-franchise biology or ask your own question.

20
In Alien 3 is it a dog or a bull that gets infected?
25
Why Do Facehuggers Fit Human Faces So Perfectly?

59
How did the “black liquid” work in Prometheus?
33
Can you hide your face from a facehugger?
12
What is the gestation period for an embryo implanted by a face hugger?