What are the other Batmobiles from the first edition of the New 52 Batman?

The one on the top right looks like the Batmobile as seen in the 1989 Batman movie. I presume the most prominent is the current Batmobile. Are these other models taken from previous versions of the Batmobiles? 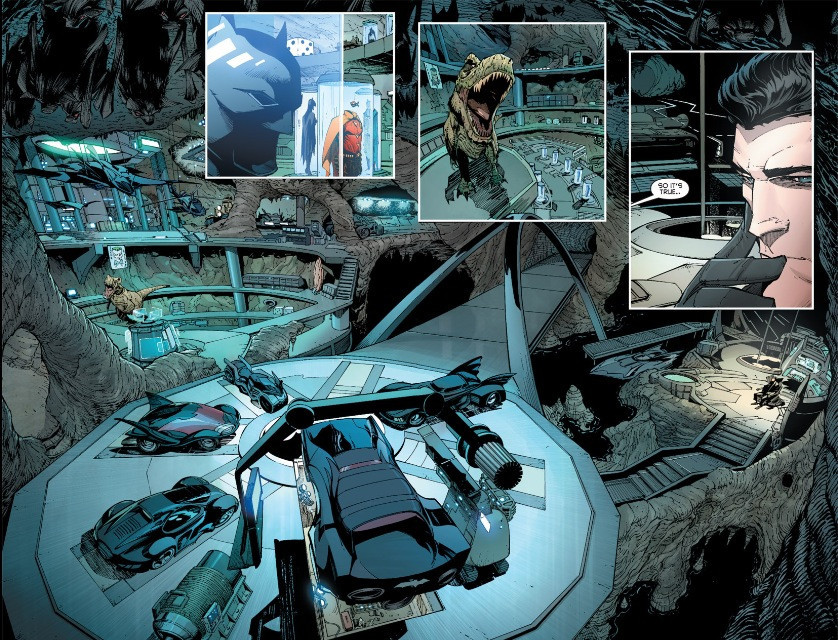 Almost as much an icon as the Batman himself, the Batmobile has seen as many transformations as the character has over the decades. Looking at several major compilations of Batmobiles through the ages, I was unable to match any but the two-finned model to the 2006 Batman: Under The Hood on the upper right side.

The smaller coup with the Batman Beyond logo is unfamiliar and does not even superficially resemble any known models I could find. The motorcycle looks like an adaptation of the vehicle seen in the recent Nolan movie versions of Batman with a bit of armor thrown over the frame.

I have a link to Batmobiles Through the Ages for anyone else to see if they can match the other vehicles. I believe many scene such as this one are thrown together without much thought to the vehicles unless the artist has a personal favorite beyond whatever Batmobile they are designing at the time.

The Batmobile History site lists these four vehicles as:

After a fight at Arkham Asylum, Batman returns to the Batcave to try out some new equipment and prepare for an evening as Bruce Wayne. Artist Greg Capullo sets the scene with a broad view of the Cave, including several Batmobiles parked on a platform near the main exit tunnel. Among these are the 1989 movie car, the flying Batmobile, and this car (as well as another new design on a lift). Capullo did not base this Batmobile on any pre-existing design, but rather freehanded it as a way to help fill out the scene.

The definitive site for Batmobile History can be found at: http://www.batmobilehistory.com. The site compiles the most popular models of Batmobiles and their collective histories.

Not the answer you're looking for? Browse other questions tagged dc batman the-new-52 or ask your own question.

38
Why is there a dinosaur in the Batcave?

11
At the start of the New 52, how many people know the identity of Batman?
30
How Was the Batcave Built in Secret?
17
Who were the 6 people who originally trained Batman in the New 52?
12
Why was Gotham City changed from a mostly fictional city to New York City in the Nolan trilogy?
4
Why are there two batcomputers in the Batcave?
1
Which Batman Series has had the most batmobiles to date?
13
Iconic line altered in Batman (1989)?
10
Should I start reading batman from the start or from the new 52?
9
How long has Batman been “The World's Greatest Detective”?
6
Searching for a particular image where either Batman or The Hulk are sitting on a throne