What did the Romulans do with the internal space of D'deridex-class ships?

Sorry if this question was already asked, but even if we accept that a D'deridex-class warbird was 1,041 meters long, it still has several times the internal space of a Galaxy-class starship, itself having 35% unused internal space that can be used for mission-specific equipment.

Yet, by DS9: "The Die is Cast", the Romulan warbird's crew quarters looked spartan by Federation standards and they had ~1,500 crewmen onboard. This begs the question: What was all that internal space used for?

We know the D'deridex was intended to be larger, and was occasionally photographed as being larger, but this isn't all that clear-cut. There is quite a bit of empty space around the singularity core part of the ship and while the corridors appear longer, the mass difference between the two ships isn't much greater.

Given that this is a television show and not a physics or volumetrics study, The nature of starships from different species could be a product of varying technologies, size vs technological capacity and modernization techniques allowing for each species to design their ships differently but still have them share similar fighting capacities. 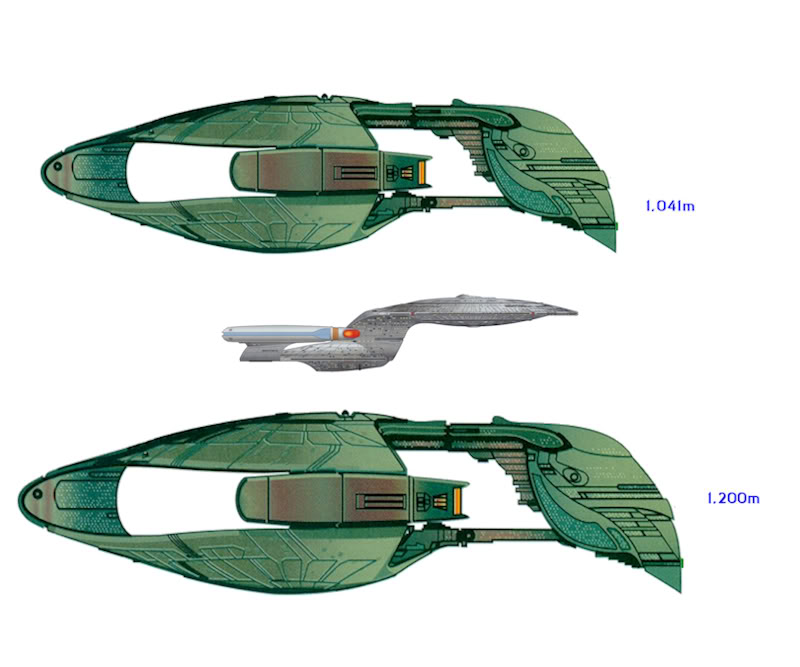 In Star Trek canon episodes dating back as far as TOS (ex.: The Enterprise Incident) and early TNG, there is an allusion made that Romulan technology in a lot of areas that are not directly tied to weapons and cloaking capability is somewhat more primitive than Federation technology. More advanced technology almost always yields a net reduction in volume for a given component.

Unfortunately, we're never told if the Romulans purchased the Klingon D7 Battlecruiser hulls from the Klingons, or if they were manufactured by the Romulans under contract, or if they were a blatant rip-off of what they saw as an excellent design for a combat vessel (similar to the way the Russians ripped-off of the design of the B-29 Superfortress). However, it almost doesn't matter because the mere appearance of those hulls in the Romulan historical inventory strongly suggests that the Romulans found their non-combat ship systems to be vastly inferior to those of their Federation counterparts. Considering the Federation's focus on broad ranging scientific advances in all aspects of starship engineering, it is highly unlikely that even if the Romulans were engaged in wholesale theft of federation technology that they would be able to maintain technical parity in engineering systems deployed in contemporary vessels.

If I had to guess, I would say that not only does the Federation typically deploy the most advanced propulsion systems (routinely outrunning or outmaneuvering same-class Romulan vessels), it probably also deploys the most advanced structural integrity fields and inertial damping systems to go along with it.

MAA amounts to storing incredibly dense potential energy in a fuel form where the fuel is produced elsewhere (ex.: a starbase), or is produced by the ship's own fusion reactors when not running at warp speeds. This is similar to the way a hybrid car powers the drive system from batteries that are constantly being replenished by an internal combustion engine.

Conversely, using a singularity is more like harvesting energy from a natural source that is difficult to initiate, control, and even shut down. Although it's a bunch of speculative technology, the analogs in current energy capture technology indicate that a harvesting approach almost always requires larger volume, low density systems, whereas a fuel based approach can be extremely energetic in a small, high density volume.

If the analogs in fuel generated energy vs direct harvesting of energy from a natural phenomenon holds for the Romulan singularity power source, that alone could explain why the D'deridex is so much larger. A good portion of it's internal volume may be devoted to initiating (no small feat that), manipulating (again, probably harder to do than with an MAA approach), and subsequently harvesting energy from a singularity. It could be that those volumes are needed to achieve similar performance to that of a much more compact and considerably less complex Federation MAA system.

Klingons and Romulans focus heavily on offensive, defensive, and maneuvering systems. In those areas they tend to excel, which is to be expected of races that perceive their warrior castes to be the foundation of their civilizations. In these areas, it is to be expected that their technology would match or slightly exceed the performance of their Federation counterparts.

Romulan ships, in particular, seem more dependent on physical structures within the ship to maintain structural integrity instead of using energized structures like Federation ships. Their vessels seem to all make use of either broadly distributed structures with opposing structures to balance them, and relying on considerably more bulky structures for smaller scales.

Also, it might be impractical to maintain intertial damping fields over the larger volumes this implies, which might mean that large portions of the internal volume of a D'deridex may not habitable while the ship is maneuvering inside a warp field, which would explain why the large volume does not correspond to a proportionally larger crew complement or evacuation capacity.

Lastly, Federation weapon systems seem to have always been more compact than those of their counterparts. Comparisons between photon torpedo tube bays between the Klingons and Federation make that very evident. The large size of Klingon disruptors in comparison to Federation Phasers (From hand held all the way up to bird of prey deployment) is very evident. Romulan plasma weapons have also been alluded to as taking up a great deal of internal volume, possibly making use of large numbers of low-density, high-energy, capacitor-like modules.

Taking all of this into account, it is a lot easier to see why a D'deridex might need to have so much more internal volume compared to a Galaxy in order to achieve comparable performance.

Of course there is the real answer, Sci-Fi Writers Have No Sense of Scale. But let's ignore that ...

Last but not least, consider that technology is not uniform across the Star Trek universe. Perhaps their warp engines are lightweight but bulky. Or their life support isn't quite up to Federation standards.

Not the answer you're looking for? Browse other questions tagged star-trek star-trek-ds9 romulan or ask your own question.

18
What class are these Federation ships?
36
Why was the Defiant so small?
6
How did Bajoran light ships get into space?
16
Was the use of Klingon ships by Romulans ever given an off screen explanation?
10
Why were the Romulans so blase about the Dominion after it gained a foothold in the Alpha Quadrant?
15
Who was in the Romulus system first - Romulans or Remans?
6
What did the Istanbul class ship look like?
23
Why did the Romulans loan a cloaking device to the Federation in DS9?
13
Why don't Star Trek ships have internal CCTV cameras?