What is the difference between Aman, Valinor, the Undying Lands, etc?

In perusing Lord of the Rings questions and answers on this site, I have seen several terms used seemingly interchangeably for what seems to be the same place - Aman/Valinor/the Undying Lands. I also gather, from Tolkien Gateway and similar wikis, that the realm in question consists of several different regions.

What is the name of the entire realm, what are the names of the different regions within it, and what are the defining characteristics of each?

These terms are occasionally used interchangeably, because they have the same thematic meaning. However, they do have precise geographic definitions. To provide context, I'm going to define two other terms that aren't covered by the question.

Literally, Eä is all of Creation; it comprises everything that is physical about the world, and is so big that Tolkien sometimes simply refers to it as "the World" (with a capital W), or "The World that Is":

Then there was unrest among the Ainur; but Ilúvatar called to them, and said: 'I know the desire of your minds that what ye have seen should verily be, not only in your thought, but even as ye yourselves are, and yet other. Therefore I say: Eä! Let these things Be! And I will send forth into the Void the Flame Imperishable, and it shall be at the heart of the World, and the World shall Be; and those of you that will may go down into it. And suddenly the Ainur saw afar off a light, as it were a cloud with a living heart of flame; and they knew that this was no vision only, but that Ilúvatar had made a new thing: Eä, the World that Is.

In modern cosmology, we might think of Eä as the Universe:

Now the Children of Ilúvatar are Elves and Men, the Firstborn and the Followers. And amid all the splendours of the World, its vast halls and spaces, and its wheeling fires, Ilúvatar chose a place for their habitation in the Deeps of Time and in the midst of the innumerable stars.

The Silmarillion has a section called "Index of Names", that confirms this:

Eä The World, the material Universe; Eä, meaning in Elvish 'It is' or 'Let it be', was the word of Ilúvatar when the World began its existence.

Arda is a more confusing case, because Tolkien was not always cosmologically consistent with it.

Narratively, Arda is the setting for all of the Legendarium, after the Ainulindalë.

Cosmologically, however, it is occasionally used to refer to two separate concepts: the Earth and our solar system1.

In The Silmarillion, for example, it seems to mean "the Earth":

But the other Ainur looked upon this habitation set within the vast spaces of the World, which the Elves call Arda, the Earth

And from the "Index of Names":

Arda 'The Realm', name of the Earth as the Kingdom of Manwë

However, in History of Middle-earth Christopher Tolkien discusses some of his father's notes:

Against the opening sentences of Note 2 is written in the margin: 'Arda means Realm'. With the statement here that 'Physically Arda was what we should call the Solar System', and in the third paragraph of this Note that 'the principal part of Arda was the Earth (Imbar "The Habitation")', though 'loosely used Arda often seems to mean the Earth', cf. the list of names associated with the revision of the Quenta Silmarillion in 1951 (p. 7): 'Arda Elvish name of Earth = our world. Also Kingdom of Arda = fenced region'.

Aman was formerly the westernmost-continent of Arda:

The dwelling of the Valar upon Almaren2 was utterly destroyed, and they had no abiding place upon the face of the Earth. Therefore they departed from Middle-earth and went to the Land of Aman, the westernmost of all lands upon the borders of the world

After the fall of Númenor and the Changing of the World, Aman was removed from the Circles of the World. It is no longer a continent on Arda, but roughly analogous to another planet in space:

Then Manwë upon the Mountain called upon Ilúvatar, and for that time the Valar laid down their government of Arda. But Ilúvatar showed forth his power, and he changed the fashion of the world; and a great chasm opened in the sea between Númenor and the Deathless Lands, and the waters flowed down into it, and the noise and smoke of the cataracts went up to heaven, and the world was shaken. And all the fleets of the Númenóreans were drawn down into the abyss, and they were drowned and swallowed up for ever. But Ar-Pharazôn the King and the mortal warriors that had set foot upon the land of Aman were buried under falling hills: there it is said that they lie imprisoned in the Caves of the Forgotten, until the Last Battle and the Day of Doom.

But the land of Aman and Eressëa of the Eldar were taken away and removed beyond the reach of Men for ever.

When you hear discussion of the "Blessed Realm", the speakers are referring to Aman; that's one translation of the word from Quenya

Aman 'Blessed, free from evil', the name of the land in the West, beyond the Great Sea, in which the Valar dwelt after they had left the Isle of Almaren. Often referred to as the Blessed Realm.

Valinor is a region of Aman, the dwelling-place of the Valar:

Behind the walls of the Pelóri the Valar established their domain in that region which is called Valinor, and there were their houses, their gardens, and their towers. In that guarded land the Valar gathered great store of light and an the fairest things that were saved from the ruin; and many others yet fairer they made anew, and Valinor became more beautiful even than Middle-earth in the Spring of Arda; and it was blessed, for the Deathless dwelt there, and there naught faded nor withered, neither was there any stain upon flower or leaf in that land, nor any corruption or sickness in anything that lived; for the very stones and waters were hallowed.

Valinor The land of the Valar in Aman, beyond the mountains of the Pelóri; also called the Guarded Realm.

This is largely a poetic term, but geographically it comprises all of the lands that are closed to mortals: Aman, and the island of Tol Eressëa (emphasis mine):

For in those days Valinor still remained in the world visible, and there Ilúvatar permitted the Valar to maintain upon Earth an abiding place, a memorial of that which might have been if Morgoth had not cast his shadow on the world. This the Númenóreans knew full well; and at times, when all the air was clear and the sun was in the east, they would look out and descry far off in the west a city white-shining on a distant shore, and a great harbour and a tower. For in those days the Númenóreans were far-sighted; yet even so it was only the keenest eyes among them that could see this vision, from the Meneltarma, maybe, or from some tall ship that lay off their western coast as far as it was lawful for them to go. For they did not dare to break the Ban of the Lords of the West. But the wise among them knew that this distant land was not indeed the Blessed Realm of Valinor, but was Avallónë, the haven of the Eldar upon Eressëa, easternmost of the Undying Lands.

1 Thanks to Shamshiel in comments for putting me on this track.

2 Almaren was an island at the geographic center of Middle-earth during the Years of the Lamps, the very first period of time following the creation of the World. Almaren was utterly destroyed by Melkor.

Aman and the Undying Lands are one and the same, the western continent.

Valinor is the central part where the Valar and Maïar and most elves live. To the north and to the south there are wastelands and mountain ranges, but nobody dwells there.

Valinor is protected on the eastern side by a high range curving northwest and southwest named the Pelori. A great gap in the mountain range opens in the center and in that gap stands the Noldorin city of Tirion where the Noldor that didn't go with Feanör still live.

That gap is opening on the Bay of Eldamar, and at the center of that bay is anchored the island of Tol Eressëa, home of the elves that came back from Middle-earth (Noldor, Sindar and others). On the northern shore of the bay, there is the sea port of Alqualondë, where dwell the Teleri.

The first mountain to the south of the gap is the Taniquetil, highest mountain of Arda and the home of Manwë, leader of the Valar.

Inland beyond the gap is Valmar, the city of the Valar, where of old stood the trees of Valinor. There some Valar dwell, along with the Vanyar, first clan of the elves and only one of the three clan to have all followed the call of the Valar from Cuivenen.

To the south-east of Valinor are the woods of Oromë, the hunter, home of many beasts.

To the south-west are the gardens of Lorien, home of the Vala Irmo (Lorien) master of visions and dreams, where Olorin (better known as Gandalf) used to dwell before coming to Middle-earth in the second millenium of the third age. Melian of Doriath also lived there before going to Middle-earth sometimes before the First age.

Completely to the west of Valinor, right on the brink of the Encircling sea, are the halls of Mandos, where the souls of the dead wait their doom, elves sometimes coming back like Glorfindel and men going to their fate out of the circles of Arda. The dwarves fates after life are not known, maybe they go to Mandos, maybe in separate halls prepared by their maker, the Vala Aulë. In the halls of Mandos also Melko was chained a long time before being pardonned and released and then going on to be the Dark Lord of the first age.

There are also the fields of Yavhanna around the center of Valinor.

In Valinor all Valar dwell, except 2, Melko, who has been thrown out of Arda and will return only at the end of the world, and also Ulmo who dwells in the waters of Arda along with the Maïar Ossë and his spouse Uinen.

North of the Pelori are the wastelands of Araman across which Melko, Ungoliant and then the Noldor fled to Middle-earth in the beginning of the first age. It was a time when the northern parts of Aman and Beleriand in Middle-earth where very near and it was still possible to cross. But after, the world was remade, most of Beleriand sunken at the end of the first age, and Aman removed from the circles of the world at the end of the second age when Illuvatar made the world round.

Here is a map (link to map), taken from "The Atlas of Middle-earth" by Karen Wynn Fonstadt:

I'll just answer you with this nice map (follow this link for a large version where you can actually see 'VALINOR' spelled out...): 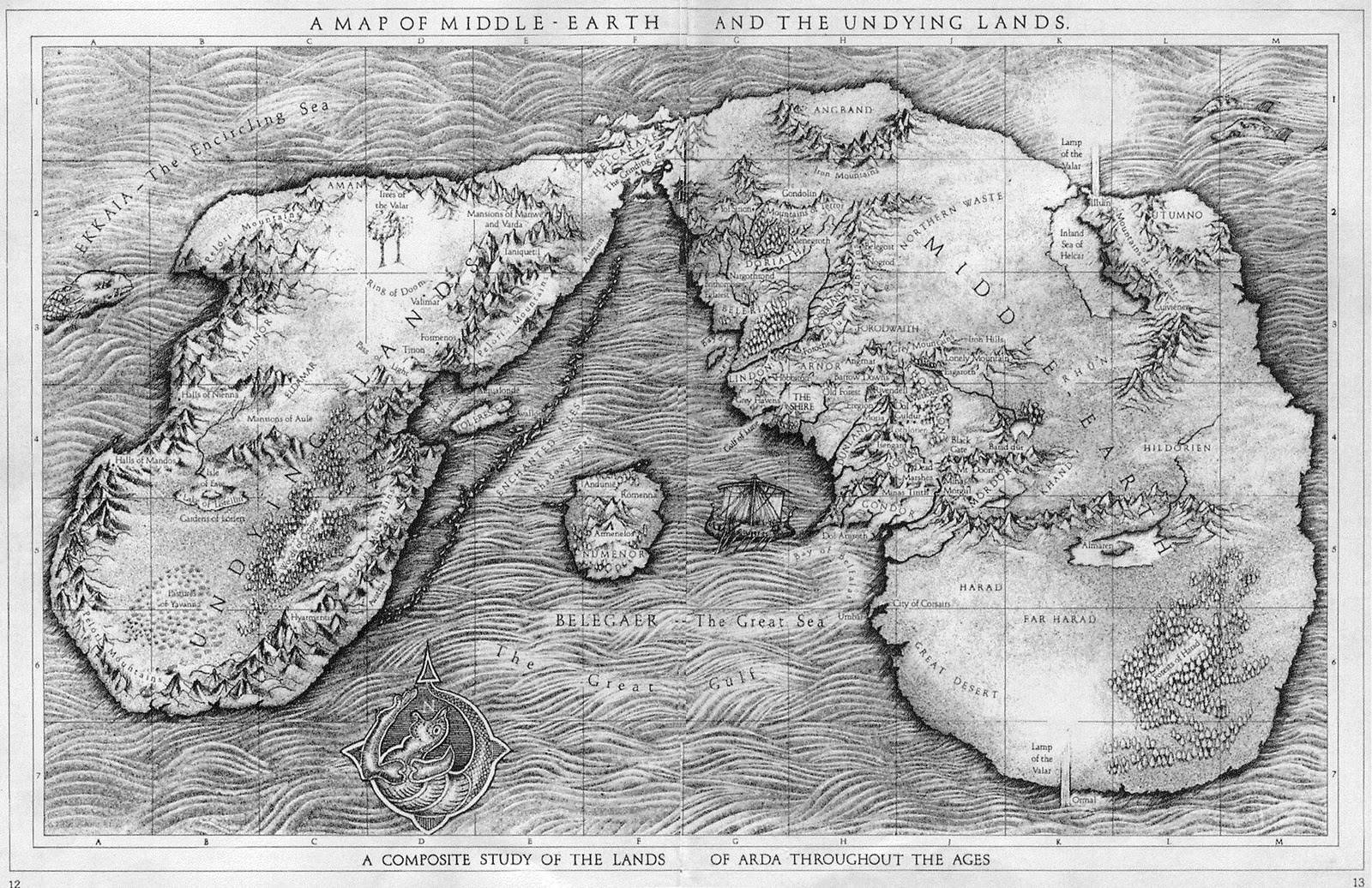 (and with the note that The Undying Lands is a poetic reference to Aman and Tol Eressea.)

15
What are the Undying Lands?
4
What do we know about the Ainur who stayed in the Timeless Halls?