Who is guarding the Infinity Gauntlet in Odin's chamber?

In Thor, Odin’s Trophy Room (which includes an Infinity Gauntlet) is guarded by the Destroyer, which is later destroyed by Thor.

Considering the importance of the Gauntlet and other relics in this vault, who is guarding that chamber now?

Whatever it is, it’s not the Destroyer.

As in the comics, the Destroyer is pretty impervious to damage. Even a direct hit from Thor’s hammer only seemed to deactivate it, not render any serious physical damage. However, we know that it’s no longer guarding Thor’s vault.

In the MCU tie-in comic, Nick Fury’s Big Week, we see that SHIELD captured the Destroyer remains and were studying its properties: 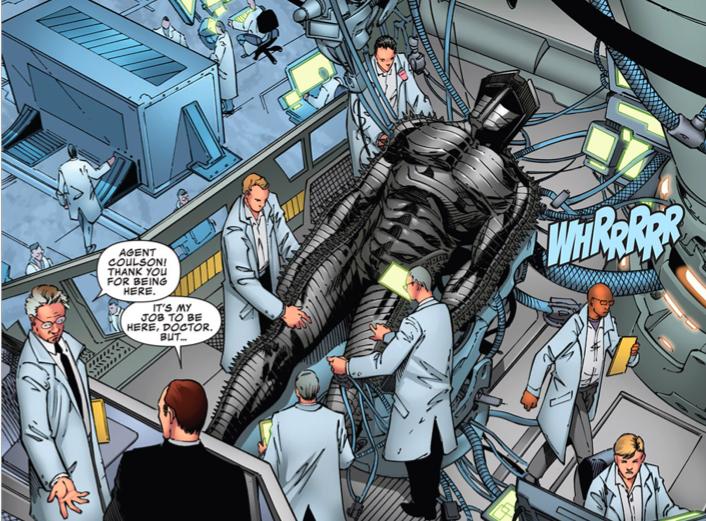 These experiments would go on to build the gun which Coulson uses in Avengers. Since SHIELD have never returned the Destroyer (or, afaik, told Asgard that they have it), something else must be guarding Odin’s Vault.

I’ve not seen any other information about what the new guard is. In Thor: The Dark World, Odin dispatches an extra squad of guards to defend it during the skirmish in the dungeons – “Send a squadron to the Weapons’ Vault. Defend it at all costs.” – but there were already Asgardians on guard in Thor, and we don’t get any word about what the normal precautions are.

In the comics, the Destroyer could not BE destroyed. It was indestructible until the Celestials came in Thor #300 and melted it down. Until that point it was considered impossible to damage it in any way.

If they didn't build a new Destroyer, then just some ordinary Aesir guards, plus that force-shield they can put over all of Asgard.

Note that in The Dark World, Thor and Heimdall were pretty convinced that Asgard was NOT capable of protecting the Aether. And then Loki sends the Aether away so he won't have to protect two Infinity Stones at once. I think we can conclude that Odin's vault is not particularly secure right now.

Nobody. Odin and most of the asgardians are dead. The trophy room has been destroyed along with the rest of Asgard. I suppose you could say Surtur is guarding over what's left.

Who guarded the trophy room between Thor and Thor Ragnarok?

After the Destroyer is taken out it stands to reason Odin would appoint a new guardian to the trophy room, possiby the Warriors Three. However, Odin doesn't actually occupy the Throne very long. At some point during the events of Thor Dark World, Loki takes the throne disguised as Odin. Presumably Loki rules over Asgard until Thor returns in Thor Ragnarok and sees through his trickery. Loki was probably less concerned with the protection of the Trophy Room likely leaving the duty to some unnamed Aesir guardsman.

Additionally, the Infinity Guantlet seen in Odin's trophy room is a fake as apparently many things in the trophy room are.

SKURGE: Odin's treasures HELA: Fake! Most of the stuff in here is fake, or weak. -Thor Ragnarok