Does the Infinity Gauntlet itself have any special attributes?

This one is pretty simple and straight-forward: does the Infinity Gauntlet have any special powers or attributes, when it does not contain any Infinity Stones? Is it merely decorative, a fashionable way of wielding all six stones simultaneously, or is there some reason why you must have the Gauntlet itself?

I have done some research, but I can't find any info one way or another. One Infinity Gauntlet (apparently there are several in the MCU) is on display in Odin's trophy room, which would seem to imply that it is special somehow, although it could just be a memento of another would-be conqueror who united the stones in the past.

Do we have any information on what the Gauntlet itself can do, and why uniting the Infinity Stones necessarily seems to involve using that specific item?

We don't know much of anything about the Infinity Gauntlets in the MCU, but the one from the mainstream Earth-616 comics universe did not appear to have any special powers. It's sole purpose was to act as a holder to unify the Infinity Gems.

Obviously, individual stones can be wielded without the Gauntlet (for example, Ronan fuses one to his war hammer). Others have tried to gather the stones without necessarily possessing the Gauntlet. In fact, for their first few appearances, the stones were used without the gauntlet; this was true up through Thanos Quest, the 1990 two-parter where Thanos gains control of all 6 stones for himself.

The gauntlet itself seems to just be a regular part of Thanos' usual costume, which he chose to attach the gems to once he had them all (in Silver Surfer v3, according to Marvel's wikia). Here, for example, is a shot of Thanos wearing two gold gauntlets that look suspiciously like the Infinity Gautlet, in Thanos Quest, before he possesses the gems: 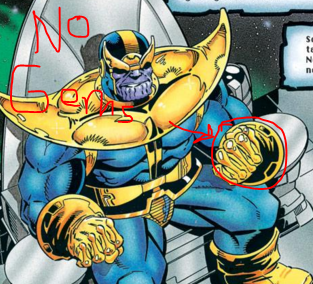 One thing to note is that the MCU version is already different from the -616 version, in that there are two of them, both with slots for 6 Infinity Stones. We saw one in Thor, but given that it had 6 stones in it, and we know for a fact at least four of those aren't the real Infinity Stones, it's possible that Odin's vault has a fake/replica. If it's a real one, however, that strongly implies that the Gauntlet itself isn't really unique, merely very convenient.

21
Has Marvel commented on the extra Infinity Gauntlet?