What Happened to the Sub in "Fantastic Voyage?"

I can't ask this question without spoiling the ending of the movie, but since it was made in 1966, I figure almost everyone that wants to see it has seen it. So if you don't want to read spoilers, stop reading now.

I remember seeing Fantastic Voyage back in the 1970s, and catching it in re-runs every now and then and I've always had the same question. For those that aren't familiar with the movie, a sub and crew is miniaturized so it can be injected into a human body so they can use a laser on a blood clot to destroy it and heal an important scientist. The catch is that the miniaturization process only lasts one hour. 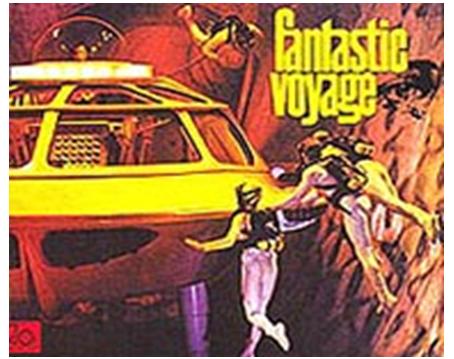 Close to the end of the movie, Donald Pleasence's character, Dr. Michaels, crashes the sub while everyone else is out of it, in the scientist's brain. White blood cells attack the sub and digest Dr. Michaels, who is trapped in the sub.

I can see the rationalization that Dr. Michaels was disolved or digested by white blood cells, so his molecules were spread out and wouldn't expand at the end of the hour, but the submarine is made of metal and glass and electronic components a white blood cell can't digest. While I don't see how Dr. Michaels could be digested that quickly, I can suspend my disbelief about that.

What does seem to be a serious error is that the sub is still in the scientist's brain at the end, when it would expand.

So why doesn't the sub expand at the end of the hour? Is there any explanation? I know Asimov wrote the novelization of the movie, but, while I've read the sequel, I haven't been able to find the first one.

Is there any in-universe explanation why the sub doesn't expand?

In the novelization, Asimov had the white blood cell with the sub in it follow the team out of the body. The remains of the sub expanded on the lab floor.

Asimov accounted for that in the novel by getting the white cell to follow them to the eye and be removed with the Team. However, the movie ignored that issue. The water in the syringe was prepared prior to final miniaturization, so it could remain in the patient without harm.

It is a problem, because it is not made entirely clear how the process is achieved. The sub would have lost some molecules of itself as it travelled through the body. The people - even in their suits - would have lost pieces of themselves. These clearly did not expand back at the end if the time.

A suggestion - maybe the re-expansion required a certain level of integrity with the original before it would work. In other words, the people were substantially the same as the people who went in, and so the re-expansion was smooth. The ship - and Dr Michaels - had been sufficiently compromised by the attach of the white blood cell that they were no longer integral enough to expand. Over time the molecules passed out of the system.

This is also full of holes I realise, but it might serve as a start.

I believe the white blood cells engulfed the digestible parts of the sub - the minerals, the iron, etc. Whatever was left would have most likely fallen apart even if it DID expand, without enough molecular bonds remaining to hold it together. If the sub's remains were in a major artery within the brain, they could have been carried away by the blood flow. If this were the case, the remains would have been further crushed by that same blood flow, like a rickety raft in fast flowing rapids. Eventually, the remains would be so small, even compared to before, that the white blood cells would have taken care of whatever was left.

IIRC, in the novelization, Asimov stated the miniaturization process could also be done in reverse, enlarging things (I recall a line about sizing an ant up to that of an elephant for study). It was casually mentioned that the syringe and the water/solution inside it were enlarged from normal (descriptions of the difference of water ripples due to size were in there too) to "meet the sub half way" in size. Thus the apparent "gallons" in the syringe were actually only several milliliters worth in volume.

Not the answer you're looking for? Browse other questions tagged fantastic-voyage or ask your own question.