I remember an animation on VHS, it should be one of the 80s animations or maybe early 90s. A strange creature eating humans' body parts and then change to a woman, some other guy told her that she smells human and they will find out she's eaten a human. I remember they (maybe witches) found her and as a punishment threw her alive in a boiling oil. While she was frying alive, she turned into her true face. And also there was a war and a green creature who has wings, a human body with a birdlike face and his feet and hands were like birds' claws. I think it was a Japanese animation but not like a typical manga (with wide eyes...). I hope someone know the name of this animation. I would really like to find it and watch it again.

Not sure, might be Devilman, possibly specifically Devilman: Yochou Sirene-hen, which features a birdlike creature on the cover, the eponymous Sirene. 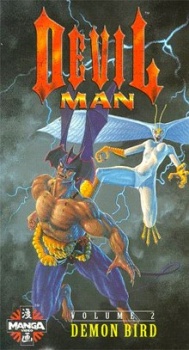 Demons exist and their power is beyond what humans can fathom. In fact they are so strong that humans do not stand a chance against them in a fight.

The only thing strong enough to defeat a demon is another demon and it is trough this logic that Ryo Asuka hatches the plan to have his good-hearted friend Akira Fudo possessed by a demon. If a person is of pure of heart then he might be able to control the demon that posses him and thereby acquire power equal to a demon. After raising some hell in a club the plan works and Akira is possessed by the powerful demon known as Amon.

Now Akira is humanities [sic] sole champion of justice against the hidden demon menace that has plagued humanity since the dawn of time.

In addition, the series is relatively gory.

Not the answer you're looking for? Browse other questions tagged mythology story-identification or ask your own question.