What did Nick Fury say to Thor in Original Sin?

In Original Sin #7, Nick Fury whispers something to Thor. As you can see in this panel, what Fury said was obscured, but it had a significant effect.

It causes Thor to become unworthy of his hammer, Mjonir.

Has it been revealed anywhere what Fury said to Thor?

marvel comics
Share
Improve this question
asked May 9 '15 at 4:00

This was revealed in Unworthy Thor #5. 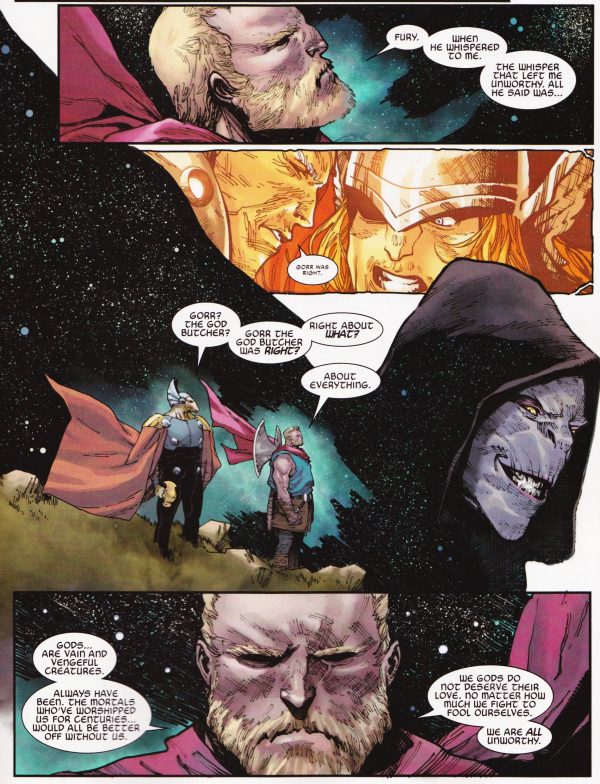 Gorr was an enemy of Asgard and Thor that claimed all Asgardians and gods were past their prime and essentially unworthy of adulation, worship, etc.

Thor realized that Gorr was right, that the "gods are vain", and thus he and all Asgardians were unworthy.

Thor dropping the hammer happened at the end of the series. So it has something to do with the events happened during the series. Most likely something Thor did.

Kid Loki is just some kid who is the 'new' Loki, while Old Loki still existed as a disembodied spirit. When Kid Loki was tricked into killing himself by Old Loki (which he knew would happen, he just wanted to save Thor from Ragnarok), Old Loki took over that body.

Shortly after that Kid Loki grew up a bit in Young Avengers, and is currently still that age in Agent of Asgard. While he still is the same Loki that will one day commit Seige, he's trying to change his destiny, based mostly on his guilt over killing Kid Loki ("I am the crime that will not be forgiven!").

Above explanation has a connection with Journey Into Mystery #625-632 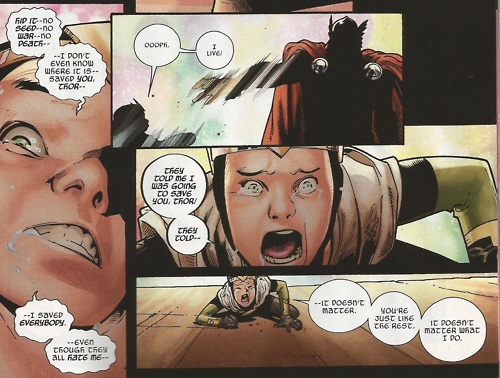 Unfortunately, Thor didn't take Loki's return to trickery very well and, enraged, nearly choked the kid. A tearful Loki explained that he'd done it to save Thor (who had a strange, unhealing injury; the Norns had claimed that if Loki did as they bade, Thor would be saved) and everyone else, despite how they all hated him. He then accused Thor of being just like the others, saying that it didn't matter what (Loki) did and they would hate him regardless.

Later, Thor tracked Loki down and aplogised for losing his temper, assuring him he loved his brother — but also admitting that he didn't trust the kid.

Whatever Kid Loki did, Thor never fully trusted him. In the end, Kid Loki died but Thor didn't realise that. That was the reason he felt unworthy in my opinion.

Now we know that Jane is the new Thor. When Thor realised that he became unworth and Jane became Thor.

I believe since the first letter is Thor I'd say that Nick Fury told Thor his real name and that he and Loki are both adopted. That's just what I think but the truth will probably be known later

For all you've saved. For all you've sacrificed. I've seen how it ends. With all your strength... it isn't enough. YOU will bring Ragnarok to pass. By your hand... they will die.

8
Why does Odinson not attempt to regain Mjolnir?

24
How could agent Clint Barton (Hawkeye) function while on the SHIELD Helicarrier deck at 30,000 feet?
13
Where did Fisk's resources come from?
26
What was SHIELD doing during the Battle of New York?
6
You can't wield Mjolnir unless you're worthy, but has anyone ever stopped Thor from wielding it?
26
What did the Scarlet Witch show the Hulk/Bruce Banner?
15
What is the “big wooden fork” a reference to?
10
Marvel Comic with Ant-Man and Spider-Man holding a weapon
29
Why didn't Nick Fury call Captain Marvel instead of Spider-Man?