How many axes did Gimli bring on the quest of the Fellowship?

In the LotR movies, Gimli leaves Rivendell with the Fellowship directly following the Council of Elrond. Yet he seems to have an absurd number of axes with him. One is destroyed when he tries to chop the Ring in half at the council - I assume this was his main axe; yet although he has no time to go home and get a replacement, he has at least 3 more LARGE axes on him during the quest. One - at least 4 feet long - is destroyed when he throws it at Gandalf (because he thinks Gandalf is Saruman). He also throws at least one more in battle (I believe at Helms Deep), and presumably never gets it back (we certainly never see it again). And throughout the trilogy he wields a massve double headed axe in battle. He has no bags, certainly none large enough to hold axes, so where do the axes keep coming from?

Do the books address where all these axes are coming from, how he carries them all, and why we never see him with more than 2 at a time (in the scene where he throws one at Gandalf, we see the 4-foot throwing axe in his hand and the double headed axe on his back, but I don't remember seeing more than one axe at a time in any other scenes)? Does he have fewer axes in the books? Or does it simply never come up in the books?

In the book, Gimli doesn't try to destroy the ring at the council, so no lost axe problem there.

And he doesn't lose an axe to Saruman in the Eaves of Fangorn either.

As far as the book is concerned, Gimli has one axe and keeps it throughout.

Per my comment above, in regards the first missing axe, there are at least 2-3 other dwarves at the Council of Elrond. It seems reasonable to assume that one of them would have been willing to lend Gimli an axe for the vital journey ahead. 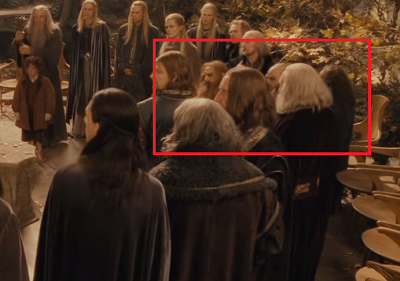 Later in FotR we see him carrying at least 4 axes about his person; a longer "walking axe", 2 belt-mounted "throwing axes" and a smaller "hand axe". 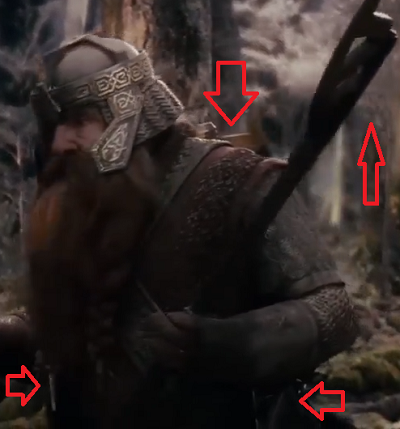 In addition to the other answers, if you watch closely he picks up some axes when making the barricade in Moria and doesn't use all of them in the barricade, including that double-headed one he uses for quite a bit thereafter.

Gimli would have had access to a forge in Rivendell, Helm's Deep and Minas Tirith. He probably wouldn't have had time at Helm's Deep to do more than sharpen his axe, but he had plenty of time in Rivendell and Minas Tirith to perform more significant repairs. The armouries in those three strongholds would certainly contain a number of battleaxes of varying quality, from which Gimli would have had his pick.

Gimli doesn't actually destroy his own axe during the council of Elrond, he picks up the dwarven smith Thrarin's axe who is sitting on the right of Gimli and tries to destroy the ring with his axe.

Not the answer you're looking for? Browse other questions tagged the-lord-of-the-rings tolkiens-legendarium dwarves or ask your own question.

-2
Did Gimli get a new axe?
12
In the movies why does Frodo try to give the One Ring to Aragorn?

37
Why does Gandalf seek counsel from Saruman about the One Ring after leaving Frodo in the Shire?
16
How did Shadowfax 'appear' when Gandalf summoned him?
58
How did Gandalf elude and puzzle Sauron?
72
During the war of the ring did Sauron or Saruman actually win any major battles?
46
Why was Boromir allowed to join the Fellowship of the Ring?
34
How does one fight the Nazgûl?
21
Does Saruman invade Rohan to please Sauron, or is it a desperate last-ditch attempt to recover the ring?
28
How did Aragorn, Legolas, and Gimli know what Uruk-hai were?