Ask Question
Asked 5 years, 2 months ago
Active 4 years, 4 months ago
Viewed 3k times
7
This question already has an answer here:
Movie with a war between Russia and the USA witnessed by astronauts on a space station? (1 answer)
Closed 3 years ago.

This is a long shot but I am looking for a movie I saw in the early 90's. It involved a ship sent to research an abandoned ghost ship. They go through "hyperspace" and find the ship. The ship they find looks like pole with a ball on the end and it is spinning. They dock with it and and find computer terminal and restart the computer. I believe by pressing some crystals on the console. They ask it some questions and get answers, form a bond but seem uneasy.

This might be a TV movie, I am not sure. I saw it when I was around ten so some details may not be 100% but I am pretty sure it is.

This sounds like the 1984 movie 2010, the sequel to the classic 2001. Although there's no hyperspace everything else in the description matches. A Soviet crew is sent to Jupiter to find the Discovery, the ship that was abandoned after the events of 2001. There are three Americans on the Soviet mission, sent along to help with recovering the Discovery. When they find the Discovery it's spinning end-over-end. They reactivate HAL, the Discovery's AI computer that had malfunctioned on the earlier mission. During the new mission they learn that Jupiter is about to be transformed, so they end up using the Discovery as a booster to get the Soviet ship get away in time. 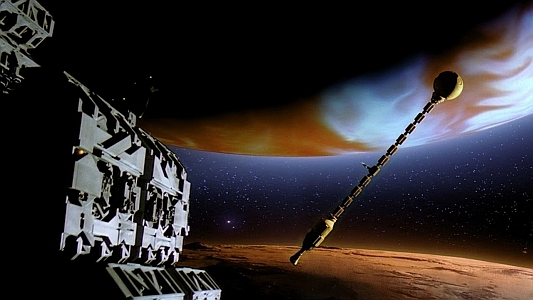 If I recall correctly there is also Event Horizon. Its a sci fi horror flick which got okay ratings, but when I was young it was awesome! It has a similar premise that your requirements ask for.

9
Movie with a war between Russia and the USA witnessed by astronauts on a space station?