How did Saruman's army reach Helm's Deep so quickly?

In the Lord of the Rings movies, when Saruman sends his army to attack Helm's Deep, he says

"This night the land will be stained with the blood of Rohan. March to Helm's Deep. Leave none alive. To war! There will be no dawn for men."

The army does indeed reach Helm's Deep that same day shortly after dark, which seems impossible. We see the orcs traveling — a few cavalry on wargs are sent ahead to harass Théoden's ride/march from Edoras to Helm's Deep, but the vast majority of the orc army is on foot. Judging by the maps in the books (specifically Stephen Raw's revision of the original maps by Christopher Tolkien), the trip from Orthanc (where the orcs start out) to Helm's Deep — even in a straight line — is at least 100 miles. 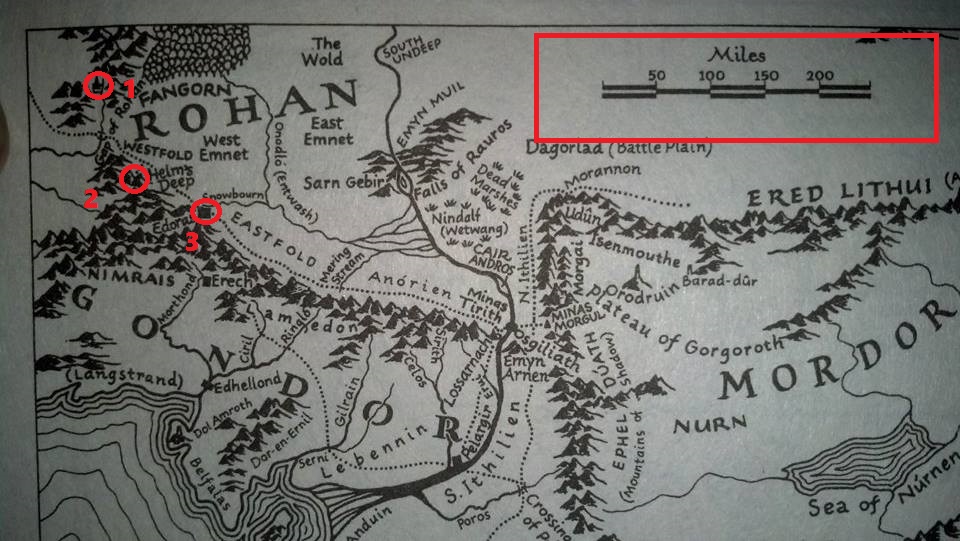 In the book The Two Towers, Éomer is shocked that Aragorn, Legolas, and Gimli have covered 45 leagues (158 miles) in 4 days, over more or less flat ground. An average human army could cover 100 miles in 3 days — the legendary 101st Airborne set a record in WWII by marching 140 miles in 75 hours, with 34 hours of actual marching time; this wasn't a normal march however, as their commander deliberately set out to break the previous record set by the Japanese.

Granted, orcs on the march rarely rest, and Saruman's army may have had some of the supernatural speed attributed to Sauron's orcs in Two Towers, but even if they were as fast as Sauron's orcs, it seems like they couldn't have marched 100+ miles in the 12-16 hours available (it was daytime when they started and they reached Helm's Deep before midnight — hence "This night"; it was winter, so sunrise would have been relatively late — say they left at 9 AM and got to Helm's Deep at 11 PM; that gives them 14 hours). Théoden's force had an extra day, only traveled half the distance, and many of them were on horseback, but they only beat the orcs to Helm's Deep by a few hours (yes, they had women and children slowing them down, but the women and children actually arrived before the men on horses did).

It has been suggested that I edit this question to expand upon why I think Jackson really was saying that the Orcs made the trip in less than a day, so here we go: Returning to Saruman's statement — "This night the land will be stained with the blood of Rohan. March to Helm's Deep. Leave none alive. To war! There will be no dawn for men". Note 2 things:

More generally, Jackson clearly doesn't care whether travel times make sense in relation to distances. To show what I mean, recall the Ents' attack on Orthanc. The Ent council happens deep in the forest, and afterwards the Ents go their separate ways. Treebeard heads to the edge of the forest, walks north for some time, but then Pippin persuades him to go south, so he does that for a while, then he sees the clear-cut former woodland near Orthanc and he bellows in rage. Seconds later, dozens of Ents emerge from the forest. Where the hell did they come from? If they were all so close to the forest's edge, why didn't they react to the destruction themselves, or mention it at the council?

Other examples of Jackson's relative lack of concern about the plausibility of various details exist as well. In the books, Legolas occasionally runs out of arrows, and has to find more. In the films, his quiver is like a machine gun in an action movie — it never runs out, and seems to contain an infinite number of arrows. In the books, Legolas occasionally misses a shot; in the movies, he literally never misses (except when he fires at Gandalf and Gandalf uses magic to destroy the arrow mid-flight — but it seems safe to assume that if Gandalf wasn't a wizard, the arrow would have lodged itself in his skull). In the books, Frodo is stabbed with a spear held by an Orc; his mithril mail prevents it from piercing him, but the impact causes severe bruising and drives some of the mithril rings so deep into his skin that he bleeds a bit, and the bruises cause serious discomfort and difficulty breathing for days afterwards; in the films, the spear is held by a humongous Cave Troll, and although the impact should have crushed his ribs, he basically passes out for a minute, then recovers completely and doesn't seem to suffer any bruising at all. In short, Jackson didn't care about plausibility and consistency in every detail as much as Tolkien did.

So how did they pull off a 100+ mile march in so little time? The answer seems to be "They marched 100 miles in less than a day because Peter Jackson said so". Is there a more satisfactory answer, preferably an in-universe answer? Or should we chalk this up to "it's a movie, it doesn't have to make sense"?

For that matter, how did the Elves make a much longer march, apparently starting a bit later than the orcs, but manage to beat the orcs to Helm's Deep? I assume they all came from Lórien, not Mirkwood (Legolas' home) or Rivendell (although they were sent by Elrond of Rivendell, not Galadriel of Lórien, so Elrond must have telepathically ordered Galadriel's troops to go). This assumption seems safe — just before the elves must have gotten their orders, Elrond and Galadriel were telepathically communicating, and she was basically guilt-tripping him into sending reinforcements; the elf troops are led by Haldir, a servant of Galadriel, not Elrond; and in any case, the trip from Rivendell to Helm's Deep is about 500 miles as the crow flies, far too long for them to reach Helm's Deep in time (although the trip from Lórien to Helm's Deep is still about 250 miles, more than twice the distance from Orthanc to Helm's Deep). This raises another problem: why did Galadriel — a queen, essentially — need Elrond's permission to send her own troops out (Haldir specifically says he was sent by Elrond of Rivendell, not Galadriel)? But that is a separate issue, worthy of its own question.

J.R.R. Tolkien wrote in LotR about the chase of Three Hunters across Rohan (Aragorn, Legolas and Gimli pursuing orcs who took hobbits prisoner). It is written there that "lesser" orcs of Moria were able to do that in three days, and our Heroes could not match that speed.

I see from the map that from Falls of Rauros to Isengard it's close to 300 miles. So it would fit nicely into the narrative. Also, the book mentions about magical/mental influence on orcs, allowing them to increase already phenomenal pace in that march (to Helms Deep that is).

How that works out in the movie? I don't even like to think about it (the movie that is...) If we assume that Jackson was trying to base it on the book, some things would be treated as "assumed". As was in this and in multitude of other cases, the assumption would be explained in one way or other by the book. Contrary to common belief, writing good screenplay off a big book is non-trivial exercise, and shortcuts have to be made somewhere. So I'm really not in the business of criticising screenplays, as I sort of get how difficult adaptation work is.

The other side of this coin is Jackson's delusions. The changes to the story which are his own and add only confusion. Like the cavalry charge relieving that keep, like Elven reinforcement and others. Those changes are unnecessary, illogical and inexplicable except for Jackson's thinking he could "improve" story somehow. With results that should not be any surprise.

Oh, one more thing: the Éomer's surprise shouldn't be a surprise. After all, he's talking to Númenórean, Elf and Dwarf. No humans there, so why? Well, maybe the dwarf...

When I was in the IDF, we did a 37 mile "march" (more like a jog) in 16 hours or so. For us humans (with a lot of gear on us and carrying some of our guys on stretchers over our heads) that would mean something like 2+ full days to cover the 100 miles you are talking about. Clearly though, we aren't talking about regular humans. As has been pointed out, Aragorn, Legolas, and Gimli had a very hard time trying to keep up with a group of orcs when they captured Mary and Pippin. Also, historically, warriors wouldn't carry as much as what modern infantry carries, so they would be able to move faster. I'd figure the total weight of equipment for Saruman's orcs was probably half what we had to haul around, and the half orcs (Saruman used human-orc hybrids) would be stronger than normal humans.

So, if they carry half what we did and they are stronger than us and basically don't stop for rests, I could see a half-orc army on foot making 100 miles in one day. It would be a hell of a march though.

49
Can the Elves do magic?
13
How did Fangorn's trees destroy the fleeing Orcs?
37
Why did Boromir take so long to reach Rivendell?
89
Why Does Gandalf Think Rohan Should "Stand and Fight"?
46
What is Elrond's position/status, as compared to Galadriel's?
19
Why did Saruman attack Helms Deep instead of capturing Edoras?
4
Why didn't Elrond use the army of the undead at the end of The Two Towers?
28
How did Aragorn, Legolas, and Gimli know what Uruk-hai were?