In the view at the end of The Lord of the Rings: The Fellowship of the Ring, where is Mordor?

This is a screenshot near the end of the movie Fellowship of the Ring:

Frodo said: "Mordor...". I think he was talking about the area in front of him. Was the mountains area in front Mordor? Was Mordor at the back of the screenshot, separated by a sea?

Check out this map: 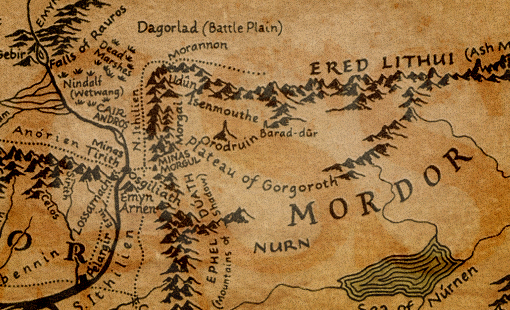 The rocky area immediately in front of them is Emyn Muil (the top-left mountains on the map). Beyond that is the Dead Marshes (the flat plain in the screenshot, reflecting light because of its watery surface). The black mountain range in the distance is the border of Mordor.

Mordor itself stands behind those distant mountains, where we can see the faint red glow in the clouds.

This scene takes place shortly after Frodo and Samwise depart from the fellowship. That occurred near the Falls of Rauros.

At the breaking of the Fellowship of the Ring, Frodo and Sam paddled a boat from the west bank of the river to the east just above the falls and had to use all their strength to avoid being swept over the falls by the current.

East of the falls, where they're standing in the screenshot, is Emyn Muil (if you Google images for that, several copies of the screenshot you posted show up).

Given that information, it's clear in the image that the foreground rocks are those of Emyn Muil, the flat area further out is the Dead Marshes, and the mountains in the distance are those that border Mordor.

They are approximately standing the circle drawn on this map, with the field of view indicated toward Mordor. 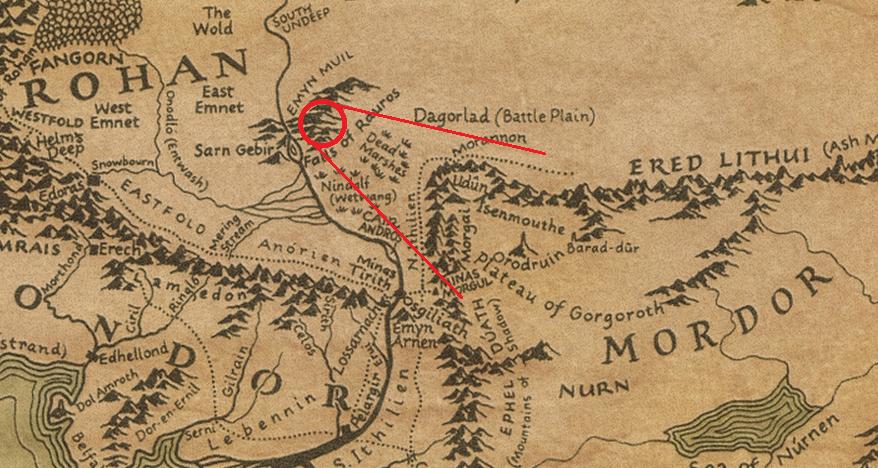 (I got the map from here)

Using your own screenshot, I've highlighted where Mordor is - the mountain range in the far distance. The orange glow in the clouds near the top center of the image is their destination, Mount Doom (the volcano where the One Ring was forged), and that mountain range represents the outer rim of the Black Land.

The flat, watery area in the middle is The Dead Marshes, which Frodo & Sam can be seen walking across later in The Two Towers (along with Gollum). I've highlighted that area as well. Below your screenshot is a more recognizable view of the marshes. In that view, you can see the mountainous edge of Mordor in the distance as Frodo & party make their way through the marshes.

Not the answer you're looking for? Browse other questions tagged the-lord-of-the-rings tolkiens-legendarium movie or ask your own question.