I read it in the early 90s, I think, although it might of course be older. It was a short book, under 100 pages, probably under 50, and I think I read it as a paperback. A boy acquires a device that he can hook up to a TV (part of me wants to say that it's a VCR, but I don't think it actually had tapes or other storage media to insert and remove) and record things. He finds that he can rewind or fast forward the events outside of the area recorded; for example, I recall he records a parade and then rewinds earlier than when he was recording to see events there and I'm pretty sure that he uses it to see the future as well (I don't remember if it was established whether this was deterministic). Unfortunately, the rest of the details have escaped my head over the years.

For some reason, I want to say that the machine in question was green, although I have no firm idea why that idea is stuck in my head. I'm pretty sure that it was operated by large buttons too, not dials.

Could this be Jim's Gift: Fast Forward the Future?

There is a very obscure movie called Jim's Gift, released in 1996.

It was based on an even more obscure novel by an equally obscure author named Sylvia Wickham, written in 1994. 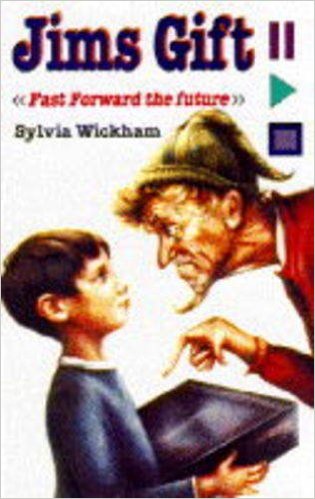 According to the movie description:

When Jim gets home, he tries the VCR, which has an interesting feature: Jim can see events from his past—from birth to just a few moments ago. He uses this to find some lost money and the like, leaving his parents thinking he's psychic. Soon Jim finds Bossy, but he's not done with the VCR. Naturally, he won't be able to resist pushing that fast-forward, and when he starts trying to foil robberies that haven't happened yet and picking horse races, there's trouble. When trouble hits, the stranger repossesses the VCR, which means Jim and a pal must solve a mystery themselves.

I can't find any book description.

There are some IMDB reviews here that offer additional details.

This fits several of the criteria, assuming that the book is similar to the movie:

Note that the machine on the cover of the movie poster does seems sort of green.