Do the Ents go to the Undying Lands?

In the book The Two Towers Treebeard tells Merry and Pippin the sad story of the Entwives, who were lost (literally lost - they didn't die); he says the Ents believe that they "may meet [the Entwives] again in a time to come" and find a new home together where they can all live in peace. However, he also says:

This loss will take the form of Sauron "withering" the woods of the Ents, just as Sauron once destroyed the gardens of the Entwives.

Then Treebeard sings an Elvish song about the Ents and Entwives, which ends with the lines

Together we [Ents and Entwives] will take the road that leads into the West,
And far away will find a land where both our hearts may rest.

Granted, fading into the West and traveling to a far away land there is a constant theme among the Elves, and this is an Elvish song, not an Entish one, but Treebeard says the Ents love it as well, which suggests that it reflects not only Elvish thought, but also Entish thought.

All of this is very familiar, and echoes the persistent thread woven throughout Tolkien's work - Arda and Middle-earth are changing; the ancient world of mythology is transforming into the world of history in which we live today; the old order is passing away; the time of the Elves is over, and the time of Men is beginning; magic will fade and science will supplant it; this final war against Sauron will be the last time that evil is gathered into a single, personified entity, and henceforth, the one ultimate evil will be replaced by many lesser, more insidious, subtler evils; and so on and so forth.

My question is this: When Treebeard and the Elvish song speak of the Ents and Entwives finding a new, permanent home in the West, are they referring to Aman? Will the Ents and Entwives eventually go to the Undying Lands? The only other option seems to be that Tolkien thought the Ents would either die out or linger in Arda forever; in the latter scenario, the Ents would presumably still be around today, though I would imagine that they all became what Treebeard referred to as "treeish", more or less immobile, and largely silent. So if the Ents don't go to the Undying Lands, did they die out, go somewhere else, or did they, in Tolkien's imagination, linger on to modern times, however treeish they may have become?

Edit: Tolkien Gateway's entry on Ents has this to say about the fate of the Ents; the first citation (marked 6) is to Robert Foster's Complete Guide to Middle-earth, and the second (marked 14) is to Return of the King, specifically the chapter "Many Partings":

The Ents remained in Fangorn where they probably dwindled in the following Ages,[6] but Galadriel wished to Treebeard that they would meet again in Tasarinan, when Beleriand is lifted again from the waves, in Spring.[14]

the-lord-of-the-rings tolkiens-legendarium ents
Share
Improve this question
edited May 12 at 17:26

Tolkien didn't know, and as far as I can tell never really clarified the point.

I think in Vol. II pp. 80-81 [The song of the Entwives] it is plain that there would be for Ents no re-union [with the Entwives] in 'history' — but Ents and their wives being rational creatures would find some 'earthly paradise' until the end of this world: beyond which the wisdom neither of Elves nor Ents could see. Though maybe they shared the hope of Aragorn that they were 'not bound for ever to the circles of the world and beyond them is more than memory.'

The critical piece of that quote is the phrase "Earthly paradise". Tolkien uses that phrase twice more in his letters, but the one of relevance is discussing Aman in Letter 181:

The passage over Sea is not Death. The 'mythology' is Elf-centred. According to it there was at first an actual Earthly Paradise, home and realm of the Valar, as a physical part of the earth.

This passages suggests to me that the Ents will not go to Aman, which by this point is profoundly non-Earthly. Further supporting this theory, the phrase "earthly paradise" comes up in an early draft of the Fall of Númenor:

For as yet the Balai were permitted by Eru to maintain upon earth upon some isle or shore of the western lands still untrodden (it is not known for certain where; for Eärendel alone of Men came ever thither and never again returned) an abiding place, an earthly paradise and a memorial of that which might have been, had not men turned to Meleko. And the Númenóreans named that land Avallóndë the Haven of the Gods

The "Balai" are a sort of proto-Valar1, and this "earthly paradise" that is described is Aman before the Changing of the World; later in the text, Tolkien writes of the Changing (note that Tolkien changed "Balai" to "Avalai" at some point before his death, but he didn't go back and correct it in all places):

Manawë being grieved sought the counsel at last of Eru, and the Avalai laid down their governance of Earth. And Eru overthrew its shape, and a great chasm was opened in the sea between Númenor and Avallondë and the seas poured in, and into that abyss fell all the fleets of the Númenóreans and were swallowed into oblivion. But Avallondë and Númenorë that stood on either side of the great rent were also destroyed; and they foundered and are no more. And the Avalai thereafter had no local habitation on earth, nor is there any place more where memory of an earth without evil is preserved; and the Avalai dwell in secret or have faded into shadows, and their power is minished.

Although there are a lot of discrepancies in this early version of the tale, it does seem to indicate Tolkien's notion of an "earthly paradise."

1 Christopher Tolkien devotes a fair bit of his commentary to the subject, and I'm not going to wholly reproduce it here, but a particularly relevant bit is:

Who then are the Avalai? Looking no further than the present text, the name must be said to represent the whole 'order' of deathless beings who, before the coming of Men, were empowered to govern the world within a great range or hierarchy of powers and purposes. Looking at it in relation to the earlier narrative, The Fall of Númenor, the distinction between 'Gods' and 'Elves' is here lost.

To add to what Jason says, the Ents' origin is spoken of in The Silmarillion (in a part written later than the 1944 letter). Yavanna, Vala of the things that grow and animals, is concerned that when the Children of Ilúvatar awake, they will destroy much of the things she devised (trees, forests and animals) to eat and to build. She asks Manwë who in his turn asks Ilúvatar, who answers:

"Do then any of the Valar suppose that I did not hear all the song, even the least sound of the least voice? Behold, when the children awake, then the thought of Yavanna will awake also and it will summon spirits from afar, and they will go along the kelvar (animals) and the olvar (plants), and some will dwell therein and be held in reverence, and their just anger shall be feared. For a time, while the Firstborn [Elves] are in their power and the Secondborn [Men] are young"

So the Ents are spirits from afar, which usually mean out of Arda (the Earth), but most probably from within the bounds of Ëa (the cosmos).

The term "spirits from afar" applies to many beings, from Ungoliant to the Ents and maybe even Tom Bombadil, but we never really know what they are exactly. It could be argued they are lesser Maïar chained to a form (a bit like the wizards) and that would make sense. It should be noted that after saying this to Yavanna, Manwë goes on saying that the eagles are also of the same kind, and were devised by him and Yavanna.

"But doest thou not now remember, Kementari [another of Yavanna's names] that thy thought sang not always alone? Did not thy thought and mind meet also, so that we took wings together like great birds that soar above the clouds? That also shall come to be by the heed of Ilúvatar, and before the children awake, there shall go forth with wings like the wind the Eagles of the Lords of the West"

Also, the citation above has a consequence: At the end of the Third Age, the time of the Ents is drawing to an end. Galadriel and Treebeard know that.

So they wish to meet again in the forest of Tasarinan, which is not in Aman, but in Beleriand at the confluence of the rivers Sirion and Narog, not far from the place where stood Nargothrond the hidden caves, Noldorian kingdom of Finrod (elder brother of Galadriel) in the First Age. That place is also to the west and a long way from Fangorn and could be what is meant by "West" in the song of the Ents.

Or do they have a place of resting in Mandos or Lórien, like the children and fallen Ainur. Another Tolkien mystery.

There is no official answer to your question unfortunately, only hopeful conjecture. Consider these points:

I get very sad every time I think of the Ents and Entwives, so I would like to imagine that after they have passed they are reunited in the Undying Lands to be with Yavanna and Oromë.

My father went to visit JRRT in 1971 to show him a map of ‘Part of Middle Earth’ my father had drawn, but far more embellished than the ones previously seen or published. The map was about a square yard in size and around the border were miniature paintings of various places, things etc that appeared in the Lord of the Rings. The map now hangs on my father’s living room wall. It was and is a wonderful map and I always gaze at it when I visit (...)

Anyway, at the meeting, my father asked about the Entwives and Tolkien, taking a pencil, marked on the map ‘Here may be Entwives’, on the east bank a southern bow of the Carnen River, flowing into the Sea of Rhun.

Later Dad inked over the pencil marks, keeping the hand-writing style. And I didn’t think much more about it, until I happened to mention the Map to one of my older brothers, who recalled the above anecdote and I realised how significant it may become - or not! 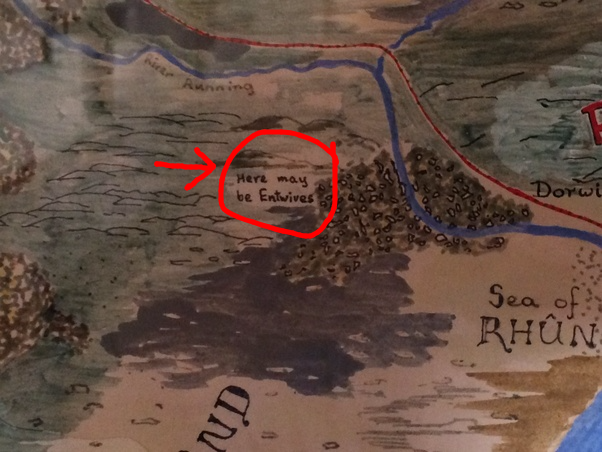 Not the answer you're looking for? Browse other questions tagged the-lord-of-the-rings tolkiens-legendarium ents or ask your own question.

7
What is the fate of all Ents who die?
8
Second prophecy of Mandos
6
Do we ever get more information about the Entwives?

14
What is the history of the Ents?
15
How widespread is arboreal sentience in Lord of the Rings?
6
Do we ever get more information about the Entwives?
22
Tolkien's history of Elves singing and Ents walking and talking
8
Is The Spirit of Carnan possibly an Entwife?
9
When would the Undying Lands become over-populated?
4
How do ents reproduce?
14
Are Ents immortal? If not, what's their lifespan?