How do zombies survive the winter?

OK so imagine a human wearing normal clothes: t-shirt, pants etc., out in the middle of the winter. They wouldn't last long. Now replace that human with a zombie. Zombies have no blood circulation, meaning they freeze easier.

How did any zombies in The Walking Dead survive the winter that was alluded to between seasons 2 and 3? I was reading the original comics and there is mention of zombies freezing and dying because they don't have any circulating blood.

I've read the comics many times and I can't recall a single time when there is mention of the zombies dying from freezing. However, the zombies do slow down and potentially freeze solid.

Why would the winter kill the zombies from lack of circulating blood? During the rest of the year, they also don't have circulating blood. They're zombies. Blood circulation has nothing to do with anything. We are literally talking about the walking dead here- the rules of biochemistry are forced to go out the window on close enough examination.

That said, a non-canonical answer from Max Brooks seems to be that they don't need circulating blood, but the consistency of the blood changes and acts like antifreeze were poured in- it requires a significantly lower temperature to freeze solid, and when it does get cold enough, fluids in the zombie's body don't have sufficient water to expand as they freeze, and don't crystallize such that they turn into frozen strawberry mush when thawed.

Edit: Wow, okay, let me clarify my comment a little bit: Yes, they freeze, and no argument. But my argument was that they aren't damaged by the freezing/thawing process, as Wad pointed out happened in Wiltshire. The freezing temperature is going to be sub-zero more than likely due to low water content. It also means that the crystals formed (if any) when frozen would not be sufficient to damage the tissue. We don't know the fluidic makeup of the zombie cells. If anything, the survivable (if you want to call it that) freeze/thaw cycle argues that it forms an amorphous solid rather than crystal on freezing. That means that the fluid in the cells does not necessarily expand to destroy the cell on freezing.

Actually, the comics don't suggest that zombies can freeze to death. In fact, quite the opposite. When the group finds the walled community of Wiltshire Estates, it is extremely cold. They sweep the area, find no zombies, and settle into the houses. Overnight, the temperature rises. A layer of snow and ice on a sheet of plywood outside the gates begins to melt, and soon we see that it is in fact a sign: 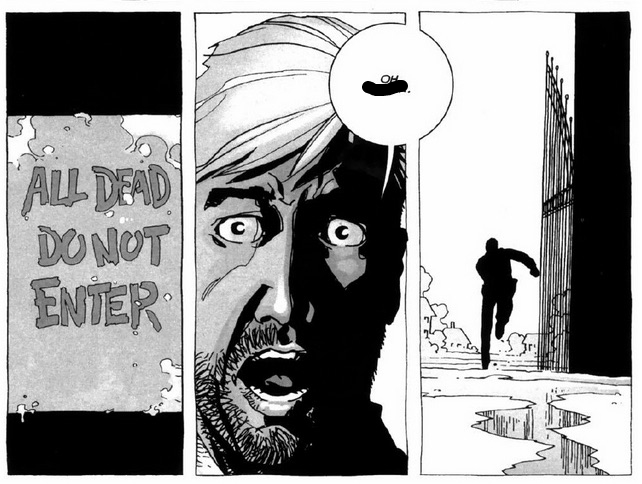 You can imagine, based on Rick's reaction and the naughty word I blacked out, how Rick feels about the warning painted on the sign. He clearly realizes that the reason the group didn't find any zombies roaming around is that they were all frozen. Now everything is thawing out, including the zombies, and Rick knows that this is a very bad thing indeed. By the time he begins to warn the others, it is too late. The zombies are up and about, and people are being attacked. One person, a woman named Donna, is killed.

This answers your question - zombies are essentially unharmed by the freezing process, and remain in a sort of hibernation until the weather allows them to thaw out and become active and mobile again.

From the Walking Dead wiki page for issue #8 of the comics:

At the road, they find a house but it's burned. Rick says they have to leave. While Glenn is filling the gas tank, Dale screams and falls down in front of a frozen zombie. Dale confirms he's not bitten, and Andrea runs to Dale and hugs him, glad to see he is unharmed. The frozen zombie moves and Glenn gets scared. Rick kills the zombie. Survivors learn the zombies freeze faster than normal humans. The group come across a group of houses enclosed by a fence, titled "Wiltshire Estates". The group proceeds to clear a house which leads them to think that they may have found a permanent sanctuary. They end up spending the night inside the cleared house. What they don’t notice is that a snow covered sign that reads “ALL DEAD DO NOT ENTER.”

This is also consistent with the holy bibles of zombie media, Max Brooks' World War Z and The Zombie Survival Guide. Because zombies aren't actually alive, they suffer no ill effects from extreme cold. Extreme heat isn't an issue either, unless it is so extreme that the zombies burst into flames. The zombie dichotomy is at work here: they are simultaneously very easy to kill and very difficult to kill. That is to say, if you know what you are doing, you can kill them without much difficulty, but they don't die very easily when left to their own devices.

The most "scientific" explanation for this is to be found in Max Brooks' books, as I mentioned above. The reason people die from hypothermia is because their body temperature drops below safe levels. Zombies, on the other hand, have no internal heat regulation system, and their bodies are roughly the same temperature as the air around them. When a person develops extreme hypothermia, the brain begins to shut down essential functions, like your heartbeat, breathing, blood pressure and circulation, etc. A zombie doesn't have to worry about any of these problems, because it is dead. It has no heartbeat, it doesn't breathe, its blood just sits in its veins and arteries rotting away, and its body temperature reflects the ambient conditions around it.

Whereas the human brain is a complex array of neurons, axions, synapses, and electro-chemical signals, all of which work in tandem with each other, and are powered by the digestion of caloric materials, the zombie brain is very different. It is largely dead tissue, slowly decomposing inside the skull, and only the brain stem is partially active.

However, even this limited activity has nothing to do with digestion or the natural electro-chemical signals present in a normal brain - it is merely the result of a virus (Note: in The Walking Dead comics, and to a lesser extent on the show, we don't know exactly what the infectious agent is - virus, parasite, fungus, etc, so it would be best to think of it as a pathogen, but for the sake of convenience, I will refer to it as a virus - as it happens, in World War Z, the infectious agent is indeed a virus, which is called "Solanum").

The virus reactivates the basic sensory and motor functions of the body. It doesn't rely on the body's natural functions of resources, and it exists only in order to spread itself to new host organisms.

The virus only activates the parts of the brain necessary for making the body detect prey, follow it, and bite it. The parts of the brain used for all other purposes are left unchanged and inactive. Even the functions we consider vital to our survival- circulation, respiration, blood filtration and oxygenation, etc, are totally irrelevant to the purposes of the virus and the zombie it creates.

And viruses are nothing if not resilient and virtually indestructible. They can survive extreme heat and cold, arid conditions, humidity, and so on, and can lie dormant for surprisingly long periods of time without dying. So when the zombie freezes, the virus basically goes to sleep and waits for spring to arrive. The zombie's muscle tissue might suffer a bit of damage from freeze/thaw cycles, but not enough to kill it.

Out of universe, there are actually a number of animals that can freeze solid for extended periods of time, then thaw out and go on doing whatever it is that they do, none the worse for wear. Perhaps the most famous of these is a species of wood frog indigenous to the northeastern U.S., which begins to produce a natural form of antifreeze (glycol, if I'm not mistaken) when temperatures drop. This prevents crystals from growing large enough to puncture cell walls, which would cause irreparable damage to the muscle tissue. When spring comes, they thaw out and hop away unharmed.

And it is worth mentioning that we're talking about mobile, cannibalistic corpses. If you are willing to accept the premise that such creatures can even exist, it probably makes sense to just accept that they don't freeze to death.

Freezing would destroy brain cells, so the zombies would actually completely die at -1°Celsius, which means Russia, Alps, Alaska, kanada, arctic is nearly Zombie free after one year

You should read about the Wood Frog that clinically dies during the winter as a result of freezing to death and then emerges in the spring alive.

Basically the zombie, like the Wood Frog, functions by the virus creating the necessary oxygen and other components needed to walk its living dead shell only. The virus feeds on non-essential functions of the brain and the body itself. You have to remember that the zombies only function is too move, see, hear and smell living creatures in order to consume flesh to then pass its own virus DNA into as well as sustaining the zombie shell until it deteriorates. All other aspects of the zombie, such as emotions, that are stored chemically in the brain and are not needed are thus fed on to provide the virus with the smallest amount of energy necessary to create functions of movement for example.

There's a lot bout TWD you just can't think about:

You have to remember that Walkers are DEAD people the only things that's human like with them is their brain. Mentioned at the CDC which is also tested the brain is shut down then restarts but only some of the brain restarts (hearing, smelling ,the ability to walk,grabe,bite,and make some kind of noise) everything is still shut down... they aren't alive people so their bodies and blood don't need clothing according to the weather like we do

3
What is the first work featuring functional zombies at freezing temperatures?