In the TV show Gotham, who is Kris Kringle?

In the TV show Gotham you get to see where a lot of the classic Batman villains get their start. I can't figure out who Kris Kringle is going to become, though. I'm not all that familiar with Batman canon, but from my searches I haven't been able to get a solid answer. Maybe someone here knows? 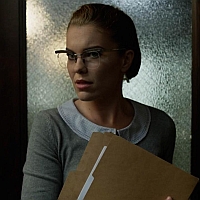 She's dead, suffocated by Nygma, which means that, outside of resurrection, she's not going to be revealed as anything from the comics.

These circumstances, of course, don't always rule out the character becoming someone, but only time will tell.

An article on bustle.com has some theories. It is quoted below.

As far as the show is concerned, Kristen Kringle works with Edward Nygma (who will eventually become the Riddler, E-Nygma, crafty isn't it?) at the Gotham City Police Department as an archivist, and the latter seems to have developed some romantic feelings towards her. As the article on bustle.com points out

Though Kristen has acted solely as a love interest for Edward so far, the Gotham writers must have something more in store for her.

The Hollywood Reporter suggested the possibility of Kris turning into Harley Quinn, a character who debuted in the Batman comics as a female sidekick to the Joker.

But this may necessarily not be the case here, as she is introduced as a counterpart (so far) of Riddler in the show and not Joker, and Joker has not even made an entry in Gotham so far.

Well, we have seen Santa share the page with the Dark Knight before (kind of) and he wasn’t

the jolly old soul he’s portrayed to be in popular culture. Instead, he had an army of elves and was decapitated by intergalactic bounty hunter Lobo. Observer suggests that Kris could be Santa's daughter. 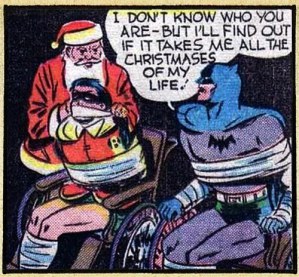 Now this is a rather long shot. It's

along the same lines as the Santa Claus theory, because Kringle = Santa = North Pole = Mr. Freeze.

But then again, these are as much as we can come up with at this point of time.

Since she, seemingly, is not a part of the DC Comics universe, do you have any theories about who this woman ultimately is?
CS: I’m so fascinated, and I love playing her so much, because there’s so much potential; her story is virtually unwritten, so she could go anywhere. She’s mysterious, and she’s brilliant, and she private, and there’s so much that can unfold from that. The fact that she’s tied to Edward leaves a lot of potential. I’m excited and thrilled to see where she goes. I have my theories about what I would love to see, but I don’t know! She’s not in the comics! We get to see where she goes.

Not the answer you're looking for? Browse other questions tagged dc character-identification gotham or ask your own question.

29
What time period is Gotham set in?
14
Does it always rain in Gotham?
7
In the TV series Gotham, do Cat's goggles do anything?
26
Has Batman himself ever taken seriously the idea that he indirectly causes Gotham to have more supervillains?
8
Were The Balloon Man & Spirit of the Goat Created Specifically for Gotham?
4
Are These the Only 5 Fairy-Tale-Based Batman Villains?
6
What Happened to Jonathan Crane after the events of Gotham Episode 15: “The Scarecrow”?
12
Is Alfred the moral conscience of Bruce Wayne/Batman?