What was that Snake in Jabba's dungeon that grabbed C-3PO by the neck?

When C-3PO and R2-D2 were being taken down into Jabba's Dungeon, what was that snake creature that grab C-3PO by the neck? 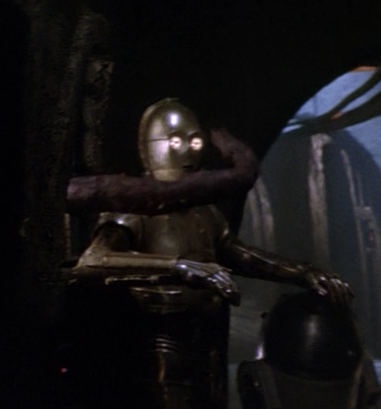 This creature doesn't have a name.

“How horrid!” Trying to avoid the hand, he moved to the other side of the passage. A long tentacle snaked out from between the bars of another cell door, and C-3PO felt the tentacle wrap around his neck.

“Ohh!” he wailed as he pulled himself free.

“What could possibly have come over Master Luke?” chatters C-3PO. “Is it something I did? He never expressed any unhappiness with my work. Oh! How horrid! Ohh!”
A tentacle has reached out from a filthy cell they are passing and wrapped itself around C-3PO’s neck.
The Gamorrean pounds it with a big fist. The tentacle jerks back into the cell, releasing C-3PO, who spins and totters awkwardly down the stone corridor after R2-D2.

Artoo and Threepio marched dismally through the dank passageway at the prodding of a Gamorrean guard. Dungeon cells lined both walls. The unspeakable cries of anguish that emanated from within as the droids passed echoed off the stone and down the endless catacombs. Periodically a hand or claw or tentacle would reach through the bars of a door to grab at the hapless robots.

THREEPIO: What could possibly have come over Master Luke. Is it something I did? He never expressed any unhappiness with my work. Oh! Oh! Hold it! Ohh!

A large tentacle wraps around Threepio's neck. He manages to break free, and they move on to a door at the end of the corridor.

The Star Wars: Complete Locations book offers a somewhat fuzzy glimpse at this individual and refers to him as "Tentacled Prisoner" 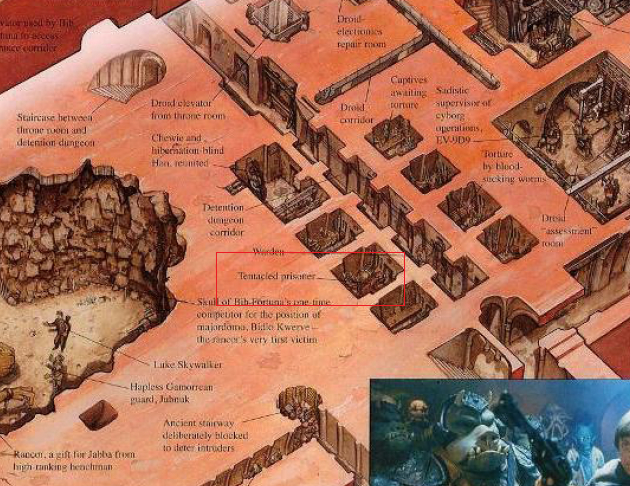 I thought of Dianoga and Bor Gullett as well. I wish some comic would expose this story to us. I have zoomed in as far as I can on the image in the blueprint book. I have no clue. :)

If it's a creature we've seen before I would guess Dianoga OR Bor Gullet. Either would make for a fascinating backstory!

5
What was the clawed hand that tried to grab C-3PO in Jabba's palace?