What is the bog beast in Star Wars: The Empire Strikes Back called?

In Star Wars: The Empire Strikes Back, we see R2-D2 falling into a deep bog upon Luke's arrival at Dagobah. He is then ingested by a beast and spat out upon the shore.

In the original script, this sequence is as follows:

Suddenly, through the thick fog layer, a dark shape appears, moving toward the little droid. The dark, sinuous bog beast dives beneath the swampy water, making a loud clunk against Artoo's metal hull. The droid disappears from sight, uttering a pathetic electronic scream.

In the script, the beast swallowing Artoo is called a 'bog beast.' Is there a more technical name for this creature, or is it only referred to as a 'bog beast?'

star-wars luke-skywalker the-empire-strikes-back
share | improve this question | |
asked May 18 '15 at 0:10

That would be a Dagobahian "Dragonsnake"

A detailed description can be found on the old Starwars.com site under the title "Meet the Creatures of Dagobah"

R2-D2 has a really close encounter with a dragonsnake during Luke’s first visit to Dagobah. These long and slender aquatic reptiles reside in Dagobah’s many primeval bogs. The lagoon near Yoda’s hut is even known (probably just by Yoda) as Dragonsnake Bog. One particular dragonsnake was hungry enough to devour Artoo when the droid was swimming to the shore. Luckily the Astromech didn’t taste very well and the creature spat the droid into spooky branches where he landed near the skeletal remains of an unknown creature. Dragonsnakes can also be found on Nal Hutta. 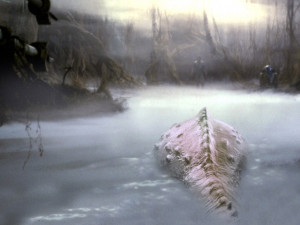 Not the answer you're looking for? Browse other questions tagged star-wars luke-skywalker the-empire-strikes-back or ask your own question.