In the season 1 finale of The Flash

Eddie Thawne shoots himself in order to erase the Reverse Flash, who is his descendant.

However, this does raise the question: Which Time Travel theory applies in The Flash?

The Reverse Flash's disappearance after Eddie shoots himself...

...would imply a single universe model, as changes in the past immediately affect the present. But according to this model...

...the Reverse Flash's disappearance should result in the timeline being reset (Barry's mother does not get killed in the first place, for instance).

But as, beside the disappearance, nothing like that happens, some form of multiverse or parallel universe is implied.

Wait! In such a multiverse, the disappearance would not take place at all, there would simply be a parallel timeline...

So my question is: What rules does time travel follow in The Flash? Is there one Time Travel theory that would explain what we see in The Flash?

Note: I know there are some closely related questions out there. However, none of them deal with the events from the finale, and none of them address the general Time Travel theory in The Flash. IMHO

Edit: I quickly sketched the singleverse and multiverse theory applied to The Flash to illustrate my problem: 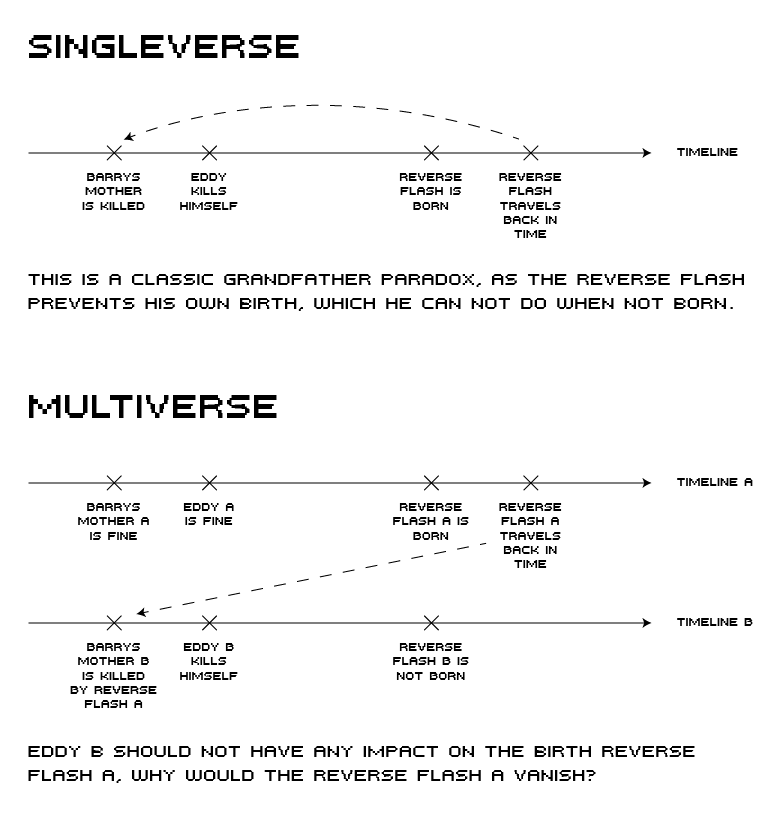 Grant Gustin (Barry Allen in The Flash) recently did an interview with TV Guide where he stated that there will be multiple timelines in future episodes.

"What's fun about this show is that there's going to be multiple timelines as we move forward," Gustin says. "I think we're going to start showing Earth-One and Earth-Two in the near future. There will be kind of different dimensions going on."

This means that any deviations from the "original" timeline will split off new parallel universes.

As you mentioned, there are seemingly only a few consistent time travel theories.

The immutable timeline (everything you will do in the past has already happened and is perhaps the cause for your journey) that raises problems with predestination. It only works when the traveller does not know to much about the things he does (or will have be done) in the past (I talked to my tomorrow self, now I am the future self and has to say and do exactly the same I remember from yesterday. Who or what will force me to do that? Will I feel like a robot, driven by an invisible force, unable to do anything else?).

In the Multiverse, every change in the past splits a new timeline. This causes the question (like every Multiverse theory) what sense makes the time travel at all, other than to make your (the traveller) live comfortable? Traveling to the past, to prevent an undesired event, or change anything for anybody else than yourself, will change nothing to the original timeline. You could only get satisfaction in thinking that at least you created an other timeline where it does not happen.

And then last but not least the single mutable timeline theory has its problems with the paradoxes. How are they resolved? Could you get the universe (really? The whole?) in an endless loop?

In Fiction, most times all this theories are mixed. Often you encounter a kind of censorship mechanism or resistance against changes, because of some laws of temporal physics in this fiction. But in most cases you can find at least one hole in it, if you think any further.

So now for your question.

The disappearance of the person directly after killing his ancestor seems to establish temporal laws, that the "present" is kind of special and cannot be changed. But the future can. If you prevent something in the future, this causes any "matter" that travelled back from this future to disappear or change from this moment on. This is not very intuitive and also raises the question, what happens to someone who lives several years in the past and has many atoms in his body from this past while many of his future atoms are now in other people or things and so on. (Ugly, isn't it?)

Of course this is not compatible with Multiple Timelines. So I would say it is (like in most fiction) inconsistent.

It's been out a couple months now at least, so not sure if it's considered spoiler or not so if I say anything spoiler like and you get upset, you have already been warned by this first part.

I think it has parts of both multiverse and single. It has single which allows for changes in the past rewrite the present and future, but also there are multiverse hints too. Even if Eobard was from a different universe though, when he came to this one, he became part of this one. So if Eobard was in his universe and Eddy killed himself, THAT Eobard would still live but the one not born yet in this timeline wouldn't exist. If there were 5 Eobards that were in this universe, they are all connected to Eddy as long as they are in the same universe.

Also, I think the wormhole/black hole was just jump started after it closed. That area was still susceptible to a rip in time. The paradox of Eddy dying reopened it. The paradox is Eddy would have never killed himself if Eobard wasn't in that universe and time. When he killed himself, Eobard no longer existed, so he would have no longer had need to kill himself. Which means Eobard would exist, but would make Eddy kill himself again, in an unending loop. It also meant Eobard wasn't able to go back and kill the mom. Everything would be changed. The black hole is a representation of this universe not supposed to exist because of the severe paradox that has formed and is trying to correct itself.

Of course, this is only my view and my interpretations of it. If any of you that have read what I put think differently, it's alright too. It's good to see different interpretations on what someone thinks about something.

I agree with you that it seems inconsistent, from what I understand it was meant to be the single timeline system, and the grandfather paradox DOES happen, the universe deals with this inconsistency by creating a singularity destroying said universe, but that means that since they stopped the singularity they live in an inconsistent world.

It doesn't matter which model. Neither would produce the desired affect.

In single model, killing oneself is the classic grandfather paradox. Once you shoot yourself, there is no longer a reason to have shoot yourself.

In multiverse model, if the son comes from a different timeline, the he would have to shoot the correct father, not himself.

Now we could say the universe splits at the dicision making process so that individual history of those experiencing the event aren't rewritten, but then that would also mean the son still lives.

Not the answer you're looking for? Browse other questions tagged dc time-travel arrowverse the-flash-2014 or ask your own question.

5
What exactly did Barry do in "Rogue Time" to change things so badly?
5
Does Starfleet know their kind of time-travel?
5
Is Reverse Flash from a different timeline than Rip Hunter?
9
Why weren't there two Barry Allens in Flashpoint Season 3?
2
How is Barry still alive in the 22nd century?
1
Understanding the timeline of The Flash Season 1
2
Why did Barry in Flashpoint (s3e1) release his captive?