Of all the humans the repair droids could have chosen, why Madame de Pompadour?

In the Girl in the Fireplace episode, surely there were plenty of other 37-year-old females in France.

Why did the robots target Madame de Pompadour?

This is described quite nicely in the show transcript;

ROSE: Why her? Why did they think they could repair the ship with the head of Madame de Pompadour?

DOCTOR: We'll probably never know. There was massive damage in the computer memory banks. It probably got confused. The Tardis can close down the time windows now the droids are gone. Should stop it causing any more trouble.

The fireplace is on the scanner. The fire goes out. On the spaceship, the Tardis dematerialises to reveal a portrait on the wall labelled Madame de Pompadour 1721-1764, then we move outside to discover that the drifting vessel is the SS Madame de Pompadour. 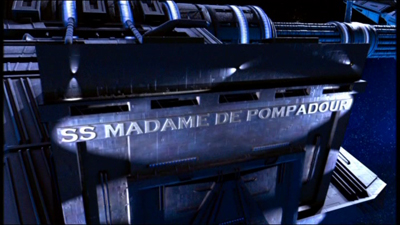 It is implied that the robots chose Madame de Pompadour solely because that was the name of the ship they were attempting to repair (the SS Madame de Pompadour). This isn't stated directly, and the clue comes towards the end of the episode (if I recall correctly), when the camera pans over the name on the side of the ship, and is never otherwise addressed in the episode.

Another thing to add to the already mentioned fact that the ship was called the "SS Madame De Pompadour": let's face it. They were 51st century robots that were running on gears. That seems unreliable and incredibly primitive for the 51st century. With incredibly limited AI, of course they were going to be severely confused! Remind me never to make a robot out of gears. To think The Doctor called them a beauty! Let's just stick with regular binary AI for now.

7
Why did the First Doctor land in a junkyard, and why didn’t the TARDIS disguise itself as junk?
8
When did using a fireplace as a portal first become used?
8
Is there canon of the Doctor (or other timelords) getting drunk?
5
Why were all the robots trying to find "The Promised Land"?
11
Why didn't the Doctor use the TARDIS to return to Madame De Pompadour
12
Why are there dry clothes in the Heaven Sent castle? Why is Clara's painting old?
9
Why did the Doctor use his hands in Heaven Sent?
0
Why did the Krillitanes look like humans when the Doctor last saw them?
5
Why didn't the Doctor remember encountering the clockwork droids before in his 10th incarnation?